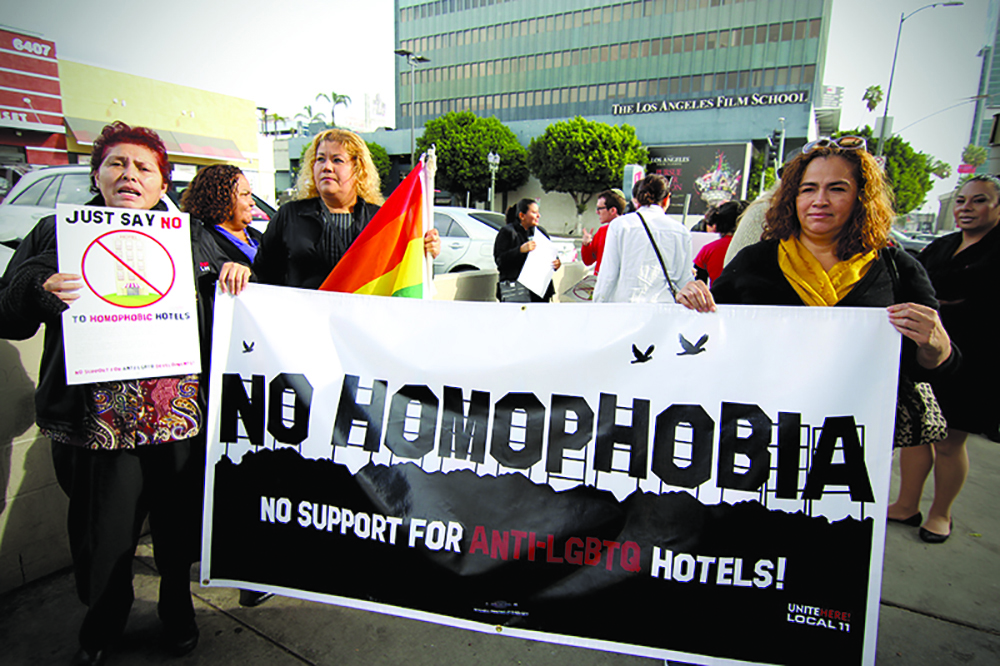 BY DOUG MONTGOMERY| The advertisements are scattered on bus benches across Hollywood. “No Homophobia,” the signs read in block lettering meant to mimic the Hollywood sign. The advertisements continue, shouting: “No Support for Anti-LGBTQ Hotels!” Then, finally, a link at the bottom: KeepHollywoodQueer.Org.

These attack ads are a single part of a campaign against the Ivar Gardens, a proposed hotel development on Sunset and Ivar. The location sits directly across from the Arclight Hollywood at the current site of a Jack in the Box. If approved, the spot would become home to a 21-story, 275-room hotel.

But the author of the attack ads is not an LGBTQ advocacy group. The development is being challenged by Unite Here Local 11, a powerful union representing 23,00 hotel, airport, and food service workers in California.

Unite Here has thrown its weight against Ivar Gardens because of Bill Willhelm, the president of RD Olson Construction – the company tasked with constructing the hotel. Unite Here has raised alarms over Willhelm’s connection to Legatus, a networking group of Catholic business leaders with a record of virulently anti-LGBTQ positions. Legatus has published papers in support of “conversion therapy” and has come out against gay marriage.

Soon after Unite Here publically highlighted Willhelm’s connection to Legatus, Willhelm announced that he was cutting ties with the business group, writing in a letter, “Although I remain a devout Catholic, some of Legatus’ beliefs regarding sexual orientation and women’s rights do not represent my own.”

And yet, this did not mollify United Here. “He did sever ties with Legatus – not because he had a change of heart, but because he was feeling pressure,” argued Andrew Cohen, spokesman for Unite Here Local 11.

This is why some observers have concluded that United Here is merely fighting a unionization campaign under the guise of an LGBTQ rights struggle. Even after leaving Legatus, United Here has made a number of unrelated demands of RD Olson, including “card check neutrality,” which allows workers to anonymously and easily join a union.

Whatever the motivations behind the campaign, it does not seem to have worked. The city councilman with the final say in approving the project, Mitch O’Farrell, criticized Unite Here’s campaign while expressing support for the project. “In my experience, there has been nothing homophobic about RD Olson’s approach to this project,” O’Farrell said in a written statement.

“My record reflects that I believe in fair wages and good working conditions,” he continued, “but as a gay man, I am extremely disappointed that Unite Here has sought to drive a wedge within my community in this way.”