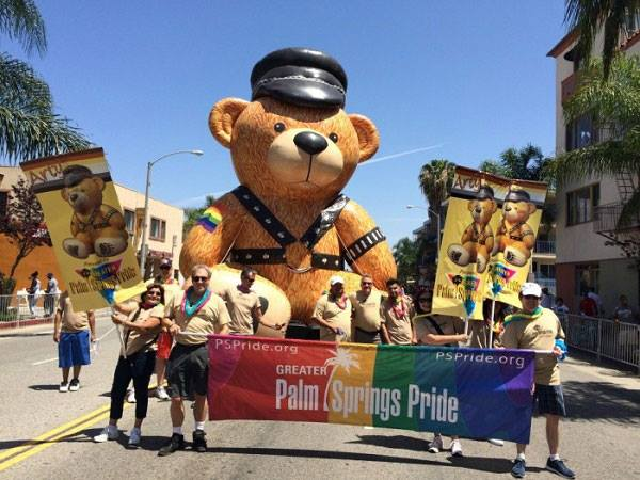 Greater Palm Springs pride week has always been known for its glitz, glamor, and a large assortment of parade floats. This year, ASF joined forces with some of the leading voices in L.A.’s LGBT media scene to give a voice to some of the more serious concerns and hopes LGBT voices have for our future. Just before Palm Springs Pride, the SAG-AFTRA LGBT Actors Committee, together with the AIDS Services Foundation Orange County and The Rage Monthly, hosted an exclusive panel to discuss the complexities of being out and LGBTQ+ in the media. “LGBTs In The News with Thom Senzee presents ‘Queer Celebrity: Challenges, Rewards, and Responsibilities of being Out in Media’” took place Thursday, November 2 from 2 to 4 p.m. at the LGBT Community Center of the Desert. Before the event, we were able to sit down with a few of the panelists to talk about the future of LGBT+ visibility in America.

The Pride L.A.: In the past few years, what are some new challenges that out LGBT+ spokespeople have had to face?

Jason Stuart: Firstly, I say this with great humility and gratitude: I have been very lucky to have been able to make a living as an actor and comedian for close to 30 years. I’m not Ellen DeGeneres or Neil Patrick Harris, but I have choices and that is a gift. Artists can now come into the media and entertainment profession as people who are already openly LGBT, rather than waiting to come out after they’ve established some success. I came out in 1993 when very few had come out before me. I was in the film “Kindergarten Cop” and had had one segment on “Star Search.” I was told it would ruin my career. It didn’t – it just changed the trajectory. I feel being out is more important than being in the media.

Thom Senzee: There are always challenges. Without visibility partners like SAG-AFTRA, AIDS Services Foundation Orange County, REVRY.TV, Dr. Bronner’s and others, it would be impossible for us to bring these panels into the community and talk about LGBT issues on a larger scale. Next year, thanks to their and others’ support, we’re going to places like Boise, Idaho, where LGBTs In The News represents a message of hope and equality in a place where LGBTQ people face tough opposition to being themselves. In many ways, they’ve had to face themselves as much as any outside force. To be sure, gatekeepers – including some newsroom hiring managers as well as casting directors in Hollywood – still either harbor some level of prejudice or are just unable see LGBTQ outside of stereotypes; however, there’s been more openness overall. The thing we all face as queer people is how authentic to our own gender and/or sexual diversity we want to be. There’s just enough safety, that every LGBTQ person in the media should at least consider being out, even if there’s risk.

David Piazza: Recently, we have seen celebrities from actors to sports figures have the courage to come “out.”  In many cases, these individuals faced discrimination and the stigma associated with being LGBT.  Michael Sams is a perfect example of this type of discrimination. The precedent being set here can possibly cause other sports figures to stay in the closet. That does not serve the LGBT community, and it does not serve the individual’s highest purpose as a human being.

How do you think LGBT+ visibility will change in the next five years?

JS: My hope is the fact that you are LGBT will not make a difference. And fewer letters! Create one word for us all maybe, “queer or fabulous!” I also have the wish to be able to play all types of characters as an actor.

TS: There is some backlash. Sinclair, which was recently described as a conservative media juggernaut, is now attempting and ultimately likely to prevail in buying Tribune with all of its coveted local TV stations, and this could put a damper on the growth of LGBTQ visibility. I worry about backlash. That said, I do think Millennials are our best hope for increased LGBTQ visibility. Even Millennial evangelical Christians are more accepting of gender and sexual diversity.

DP: With the arrival of the Trump era comes setbacks for the LGBT community in all arenas in terms of loss of freedoms and civil rights. Trump appointed the anti-LGBT senator Sam Brownback as Ambassador at Large for International Religious Freedom. Brownback refused to answer questions of the Senate Foreign Relations Committee on whether it was acceptable or justifiable to criminalize, imprison, or execute a human being based on being part of the LGBT community, under the guise of religious freedom. That is an abomination. It’s not religious freedom – it’s religious tyranny, and it’s a crime. The fight today for LGBT freedoms, civil rights, and respect as human beings is as imperative as it was in the 1980s.

Are there any issues that aren’t political that you think we should be focusing on? (in terms of LGBT+ issues and representation in America)

JS: We can still be kicked out of our homes in some states and jobs. A lot of people still do not know this. I hear this all the time, folks think that because we can get married, we have all the other rights. We are still fighting for equal protection.

TS: I think gay men like me should be more active in promoting the equality of women in our community and beyond. I think actively seeking to affirm pansexuality and gender fluidity in ourselves and others – based on each individual’s claimed expressions and identities, not what we think they should be.

What are some personal struggles you’ve had to face with being out?

JS: I’ve been judged for being gay and haven’t been given the same opportunities to compete as straight people in the industry are given. Being treated equal and not told we don’t fit in or are not right for a role. That they are waiting for that special part.

TS: Growing up at a certain period of time geographical locations, including having gone to high school at Palm Springs high and in South Coast region of Orange County, my societal relationship with being gay has been fairly comfortable. There was a moment of discomfort when my dad found out I was gay when I was 14. He found a letter I had written to another boy, who was also gay. He ultimately became accepting, though always worried I would subjugate myself to a “subculture” and miss out on “mainstream life.”

What do you think the role is of public LGBT+ figures in media?

JS: To watch, listen and support and help amplify other LGBT people working in the media. Well, the talented ones anyway!

TS: First and foremost: do no harm. Being authentic, while also standing up for other LGBTQ people in the media and in society at large when they are under attack for being authentic and true to the cause of equality. But there’s also an obligation to stand up to those who would harm people of gender and sexual diversity—even when they are themselves LGBTQ.

How do you think that role is changing (in light of the Internet, etc.)

JS: People are able to pick folks they like and that make an impression on you personally. But on the opposite end, young people run the Internet and they have a bias on older artists. So we need to not say as older people “I don’t do this” but to learn and support.

TS: Roles for LGBTQ media professionals in the Internet Age are changing. That said, there’s no one-size-fits all answer to how LGBTQ people should be portrayed or how we should present ourselves. I think it goes back to do no harm and be authentic.

What are some personal goals you have to further LGBT+ visibility?

JS: Opportunity, opportunity and more opportunity. I’d like to help stop the cutting out different kinds of people because they are not 18-35 with a perfect hairless body and see that all gay people don’t find the same people hot. I think a lot of people are too uncomfortable about saying, “I like chubby men, or short or older or a guy with a belly or hairy guys.” “This Is Us” is a perfect example of showing different kinds of people and their loves and lives. We are just starting to crack the “looks-ists” and ageist people who make the choices of who gets to act and make a living.

TS: I’ve been working on a few projects…let’s just say there will be a streaming or other TV version of LGBTs In The News with Thom Senzee soon. It will be different in format than the live-discussion panel series we launched in 2013 at the very moment the Supreme Court knocked down DOMA and Prop. 8. However, it will also serve as a platform for bringing LGBTQ thought leaders and leading queer entertainers front-and-center with live audiences. It may have a different title and will definitely include humor and entertainment. Hint: #QsInTheNews

How do you think about speaking to different audiences (in terms of age group, political affiliation, etc.?)

JS: It’s very important. The colleges seem to cut folks out these days because of age. When you reach a certain age they don’t seem to be interested. They want what’s new and trendy. A lot of times that is what they may want to hear. History means something. Age tells us where we came from. I was always taught to never forget. And that silence equals death. So speaking out and mentoring is a big part in my life.

TS: Intersectionality and intergenerational engagement is paramount to progress!

Thom Senzee is a Southern California-based journalist and the founder and moderator of the live panel discussion series “LGBTs in the News.”

Jason Stuart is an actor, comedian, filmmaker and activist. Recently seen in “The Birth Of A Nation” and “Love” from Judd Apatow. His short film “Like Father” is currently on the film festival circuit and his series “Mentor” is now on AMAZON.