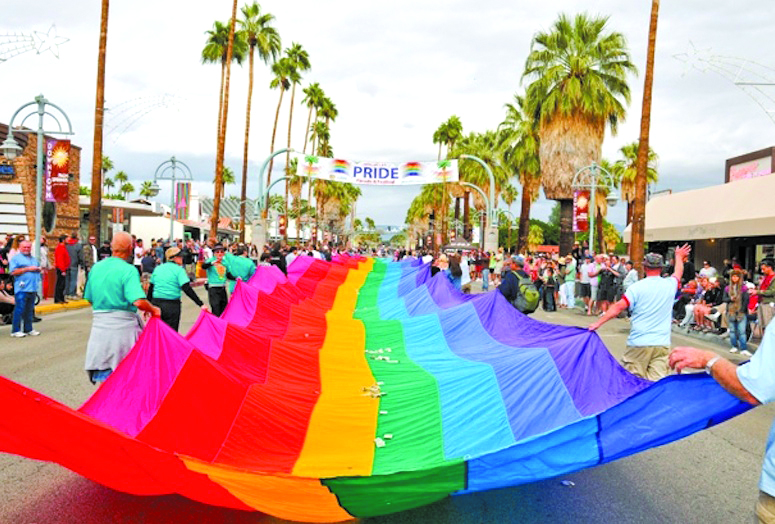 By SAMUEL BRASLOW and HENRY GIARDINA| The City of Palm Springs, California, has long held a special place within the LGBTQ+ community. The resort-city has provided gay Los Angelenos with an accessible get-away, leading to a disproportionately gay population. With a gay population seven times the national average, Palm Springs has the fight-highest percentage of same-sex households in the nation.

On Tuesday November 7, along with many other historic victories for LGBTQ people across the United States and in the United Kingdom, the people of Palm Springs elected to its City Council two new members: Lisa Middleton, a transgender woman with a long history of government service, and attourney Christy Holstege, who identifies as bisexual. With these two additions, the Palm Springs City Council is now made up entirely of sexual and gender minorities.

Middleton’s victory resonated beyond just the borders of the small desert city. She made history as the first openly transgender candidate elected to a non judicial position in California (previously, Victoria Kolakowski was elected as a Superior Court judge of Alameda County).

“It’s all because of all of you that we are here tonight, celebrating a victory, a historic victory for our city and for our state,” Middleton told supporters Tuesday night, according to The Desert Sun.

Christy Holstege is the first millennial elected to the council. This was her first bid for office. “Now is when we can say we didn’t know what we were doing,” she joked about the campaign, according to the Sun. “We figured it out just with hard work.”

Prior to her victory, Middleton worked on the California State Compensation Insurance  Fund. She is currently a member of Palm Springs Planning Commission, the chairwoman of the Organized Neighborhoods of Palm Springs, and a member of the boards of directors of the Desert Horticulture Society and the Desert LGBTQ Center. She has used her position on the Planning Commission to advocate for downtown renewal, solar energy, and cooperation between developers and neighborhoods. Holstege works as a lawyer who focuses on underserved communities, including people with disabilities, LGBTQ people, homeless individuals, injured workers, personal injury victims, and victims of discrimination and violence.

LGBTQ+ advocates from all over hailed Middleton’s win.  “In light of the repeated attacks on transgender people from the federal government, tonight’s wins by Lisa Middleton in Palm Springs and other transgender candidates in Minneapolis and Virginia are a beacon of hope that voters have embraced values of equality and inclusion,” said a statement issued by Rick Zbur, executive director of Equality California.

“By becoming the first out transgender person to be elected to a nonjudicial office in California, Lisa is paving the way for others to follow in her footsteps in California and across the nation. Her first place finish out of a field of 6 candidates demonstrates that a glass ceiling for transgender people who want to serve in elected office was not only broken, but was shattered in Palm Springs. With the election of Lisa and Christy Holstege, the city of Palm Springs will now be represented by a city council that is 100 percent LGBTQ+.”

We caught up with Middleton to talk about her historic win and her plans for Palm Springs moving forward.

The Pride: What was the impetus for your run?

Lisa Middleton: I have a very strong belief that I was the best qualified candidate for the job based on my 36 years of government experience, by experience in the neighborhood, as President of my own neighborhood and the coalition of 44 neighborhoods in Palm Springs, experience on planning commissions, and the range of relationships that I have throughout Palm Springs, from people in the business community to neighborhood leaders, to ultimately receiving the endorsement of the police officers’ association and the firefighters’ association. I think that we could put together a very strong campaign team based on the experience I had working with the team that elected Geoff Kors to city council in 2013.

You’ve been in the community for a long time. Are there any new initiatives that you see as being a really positive point of change for Palm Springs?

I’m excited to work on issues around renewable energy, I think we have some opportunities in Palm Springs to test leadership throughout the country on use of renewable energy and the abundant solar power and abundant wind power that we have right within our city limits. We are currently in the process of working with other cities in the Coachella Valley to develop a new energy option that will roll out in the next couple of years that will provide individual consumers with a choice between the traditional utility company or purchasing their energy through a community choice aggregation program. In other places in California it has resulted in an increase of renewable energy.

If you were trying to describe Palm Springs to someone who had never been there, what would you say about it?

Palm Springs is a small town of 45,000 people that has a population of world-class talent that attracts over 5 million visitors from all over the world to our city each and every year. We are a world-class destination, yet a small, friendly town with a very progressive approach to politics and one of the most LGBT-affirming communities that you will find anywhere on this planet.

Who are you excited to start working with in the local government?

What are you excited to get started on?

I’m thrilled to have the kind of mandate that was given to Christy Holstege and I. We won by 2 ½ to 1 over the next competitor. I think we’ve been given a mandate to move forward in Palm Springs to complete the revitalization of our Downtown, to add additional fire services, and to deal mainly and effectively with homelessness issues in our city.