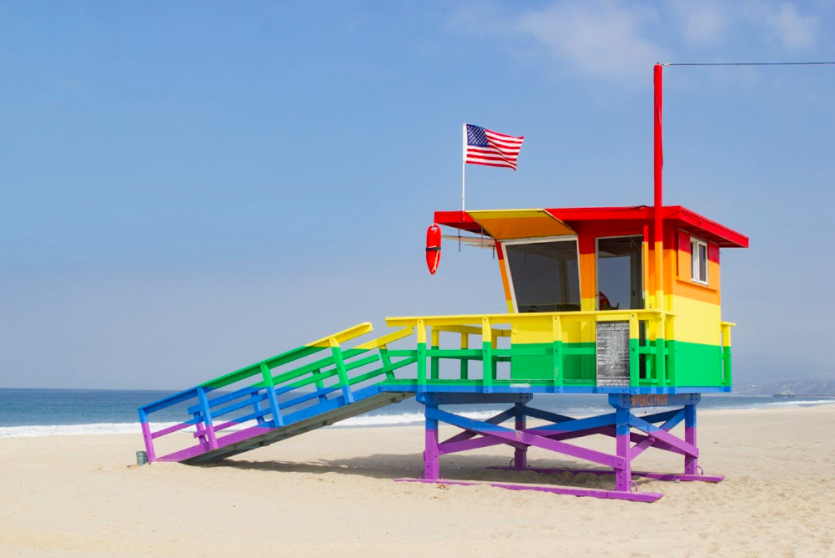 What started as a temporary part of this year’s Venice Pride festival has just become a permanent monument to L.A.’s LGBT history – and its future.

When one of Venice’s eggshell-blue lifeguard towers was painted over with the colors of the rainbow this June, the result encouraged tourists, Venice residents, and Pride-goers alike to come and marvel at the multicolored monument, taking selfies in front of the tower and documenting the temporary art project via social media. The city had originally planned to repaint the tower its original color on September 8.

But Venice’s citizens had a different plan in mind.

Thanks to over 10 thousand signatures on a Change.org petition to keep the tower as is, L.A. City Councilmember Mike Bonin, Venice Pride President Grant Turck, and members of the public met Tuesday, September 5, to discuss the lifeguard tower’s new status as L.A.’s first LGBT monument. The tower was initially created as a monument to the late Bill Rosendahl, the first openly gay person to serve on the L.A. City Council.

Venice Pride founder Grant Turck made an impassioned argument for the preservation of the lifeguard tower before L.A. County Supervisors on Tuesday.

“There’s the Eiffel Tower in Paris. It was temporary, too, at first, only planned to stand tall for 20 years before being dismantled.” Turck said. “But it found new purpose through telecommunications, transmitting live-saving military radio frequencies and television broadcasts. And now travelers from far and wide gather to marvel at the romantic symbol of France’s science and culture more than a century later.”

Turck urged listeners to use the tower as an emblem and a gesture, a sign that, despite our country’s rocky political present, Los Angeles stands for progress, for the proud LGBT history that makes up its past, and for an inclusive, forward-thinking future.

“Show that diversity is celebrated,” Turck asked. “Show that all people are welcome here. Show that in the face of hate and division, the Los Angeles community stands unwaveringly for love and acceptance.”

The vote to keep the rainbow tower as-is passed unanimously.