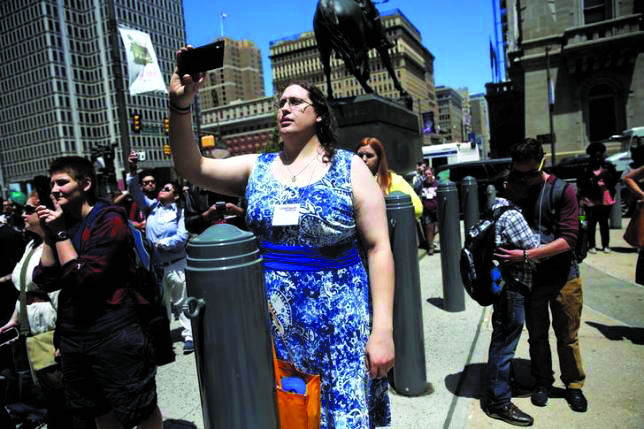 BY DOUG  MONTGOMERY| The story of Kate Lynn Blatt followed the pattern of most of her fellow Pottsville, Pennsylvania residents—only, for a period of her life, she woke up as a woman and went to work as a man. In 2006, after a difficult six-year transition, Blatt began working a new job at the outdoor equipment and apparel chain Cabela’s, this time as a woman. The following six months have become the focus of a game-changing lawsuit that has already shifted the landscape of transgender legal protection.

A Philadelphia-based judge has permitted Blatt to sue Cabela’s under the Americans with Disabilities Act, making her the first transgender person to do so.

Blatt, now 35, alleges in a lawsuit that Cabela’s subjected her to humiliating treatment. Although she was excited to begin work as Kate, the problems arose as soon as she punched in.

“Oh my God, it was the most liberating thing I’ve ever experienced in my entire life,” Blatt said in an interview with Reuters. “And then slam,” she said, punching her hand. “Employee discrimination.”

She was told by management to use the men’s bathroom at first. Later, they allowed her to use use the gender-neutral restroom. The suit also alleges that Cabela’s required her to wear two name tags: one for her self-selected name, Kate, and another for her birth name, James.

She had already legally changed her name and gender with the state of Pennsylvania.

In many instances, people who feel discriminated have sued under the Americans with Disabilities Act (ADA), a landmark piece of legislation that prohibits discrimination on the basis of physical or mental disability.

When the ADA was passed 1990, there was controversy about classifying being transgender as a disability, and so transgender people were specifically excluded from the ADA.

However, today, transgender advocates argue that although being transgender is not a disability, it can lead to gender dysphoria, a type of anxiety that stems from being incorrectly gendered. This, according to advocates, should be covered by the ADA.

The lawyers for Cabela’s asked that the judge dismiss the motion altogether.

On May 18, Judge Leeson sided with Blatt’s lawyers and allowed her to become the first transgender person to sue for discrimination under the ADA.

Going forward, although the decision is not binding for other courts, this ruling opens the door for others to file similar suits.