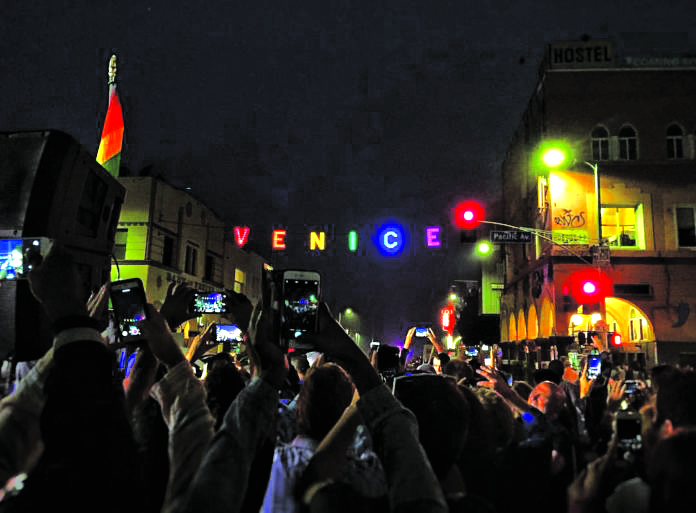 After last year’s calamitous closing of Roosterfish – Venice’s one and only gay bar – Grant Turck decided it was time to step up. He organized the first annual Venice Pride, a chance for LGBTQ Venetians to come together and celebrate on their home turf.

This year, with the opening of the West Side’s newest gay bar The Birdcage, Venice Pride’s second annual celebration has even more pep in its step. From June 2 to June 3, the streets of Venice will be ablaze with neon rainbows and topless men. The celebration will kick off with the Venice Pride sign lighting (and block party) at 5 pm on the 2nd, featuring rainbow-colored light bulbs that community members have ‘adopted’ beforehand to color the night sky over Venice Beach. Afterward, Venetians will make their way to the beach for a “Gaywatch”-themed after party. The next day the cleanup begins: Venice Pride will team up with Heal the Bay for a big, sexy beach cleanup, featuring prizes for the most trash hauled and—of course—for the best costume.

Last year, Grant Turck spoke to the crowd about Venice’s unique place in SoCal culture: “For 100 years Venice has welcomed LGBTQ Bohemians, beatniks, poets, artists, hippies, surfers, body builders, musicians, actors, designers, filmmakers, and all of us who simply expressed our own sexual and gender identities. So, as we still struggle for equality, it is appropriate that we celebrate our uniqueness, here in Venice Beach, a place that celebrates differences!”

This year is an extension of that promise, as Venetians from all over come together to light up the night together and honor the new, much-needed tradition of Venice Pride.

From May 20-21, the streets of Long Beach were taken over by a parade of LGBTQ Pride marchers and their allies. Since 1984, the annual Long Beach Lesbian & Gay Pride Festival & Parade has been a way for Long Beach citizens, groups, and non-profit organizations to come together and celebrate under the banner of Pride. This year, the talent lineup was even more impressive than usual, featuring performances by the legendary Chaka Khan, Monica, and Taylor Bennett (aka Chance the Rapper’s younger, extremely talented brother.) Lisa Vanderpump held this year’s title of Celebrity Grand Marshall.  At 10:30 a.m. on Ocean and Lindero Ave., the Long Beach Pride Parade kicked off, heading west and ending at Alamitos Blvd. where the headliners performed on the festival grounds.