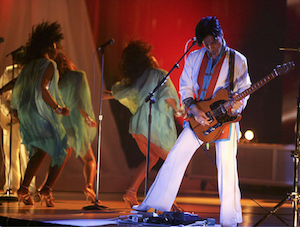 Prince, who sold more than 100 million records during a sweeping and energetic career in which he won 7 Grammy’s and and an Academy Award for Best Original Song Score — Purple Rain  — in 1985, died today at his Paisley Park estate in Minnesota.

The singer has been battling a mysterious illness and was recently forced to make a medical related emergency landing in his private jet. He appeared in concert the next day. TMZ has reported that he was battling the flu.  The singer had recently cancelled other appearances.

Prince Nelson Rogers broke through to superstardom with his 1982 album “1999.”

Rolling Stone, in 2008, reported that Prince was reportedly “very angry” that the New Yorker accused him of making anti-gay marriage comments and claimed the magazine misquoted him in a recent interview.  “When asked about his perspective on social issues — gay marriage, abortion — Prince tapped his Bible and said, ‘God came to earth and saw people sticking it wherever and doing it with whatever, and he just cleared it all out,'” the magazine reported.

Discussing his pet peeves with Arsenio Hall, Gawker reported, he said he hated people touching his hair and hated when people bumped into him. “It’s mostly dudes,” he said as he squirmed and jokingly made fey jestures.

Perez Hilton says he was told that “What His Purpleness actually did was gesture to the Bible and said he follows what it teaches, referring mainly to the parts about loving everyone and refraining from judgment.”

He briefly changed his name to an Egyptian symbol, leading many who speculated that he was gay to call him “Miss Thing.”  He was married twice.