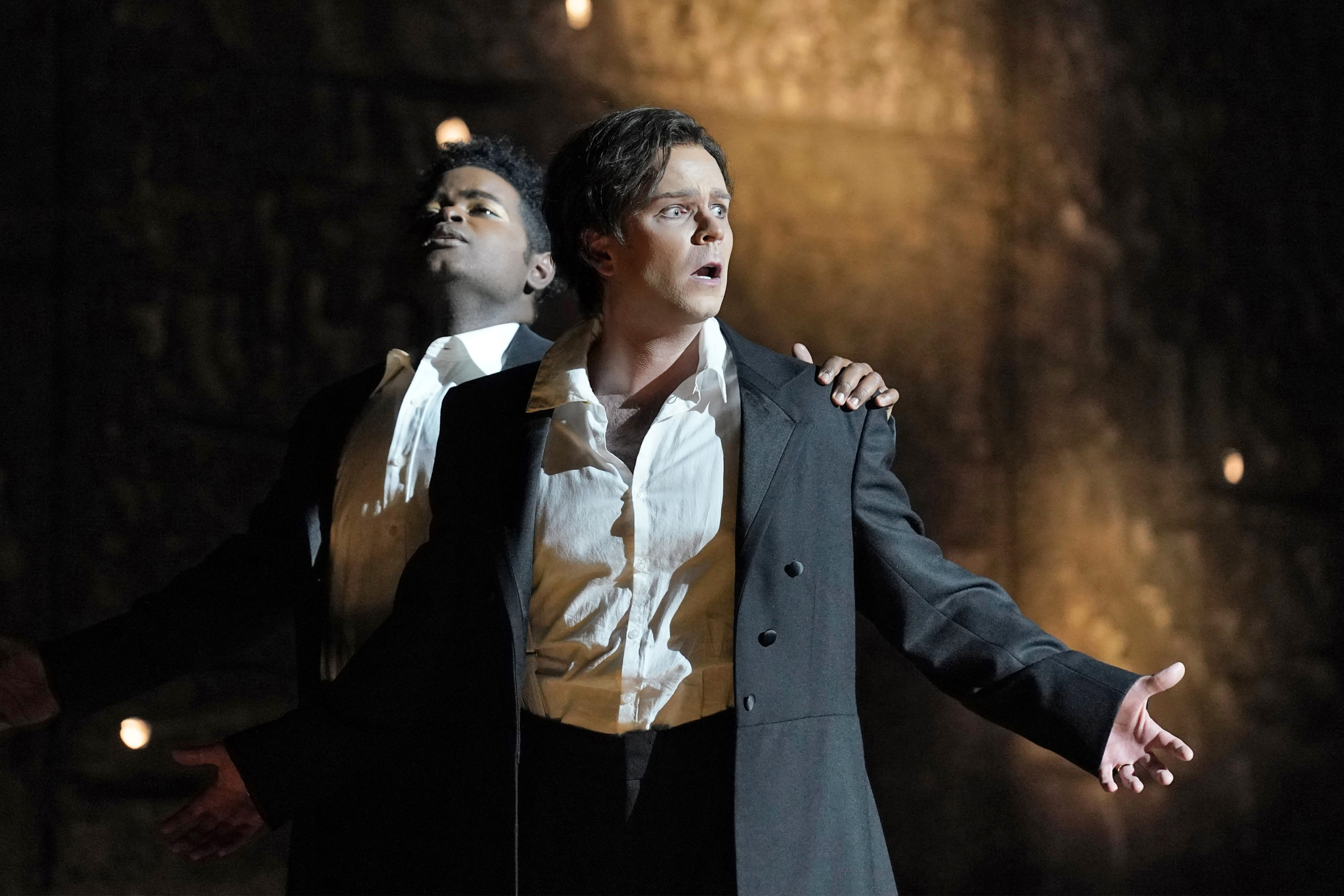 The scene: Eurydice always imagined that her wedding day would be a day she’d never forget. But after a tragic death, mere hours after trying the knot with Orpheus, her memories are almost entirely erased during an unsettling descent into the Underworld.

Reunited there with her late father, Eurydice attempts to piece together faint recollections of the life she left too soon. But when Orpheus miraculously arrives to take Eurydice back to the world of the living, she must make an agonizing choice between the two men she loves—her adoring father or her devoted husband. Love always wins… right?

LA Opera begins the new year with a new opera: the world premiere of “Eurydice” by composer Matthew Aucoin and librettist Sarah Ruhl, based on her 2003 play of the same name. Opening night was this past weekend. The Pride LA spoke with Orpheus’ double, John Holiday, about his experience with the opera. Check it out:

First, thank you so much for doing this feature on me. I’m so grateful to have the opportunity to share a part of my life with you and the The Pride LA audience. My name is John Holiday, Jr., and I am countertenor, coming to you all the way from Rosenberg, Texas, which is a suburb of Houston. For me, I’m so thrilled to be back in Los Angeles. Over time, L.A. has become my most-favorite city in the United States because I seem to get so much energy from all of the people, fashion, music and overall ferocity of the city. I just love it. In addition to singing, I’m also a huge advocate for arts in schools and mentoring the next generation of what I know will be great artists, teachers and so much more. I come from a huge family, so, naturally, I’m a people person and I gain so much energy from connectedness.

To be honest, I am super excited about performing the role of Orpheus’ Double in the world premiere of Eurydice. The excitement comes from the ability to breathe life into a brand new work and to create the character for the first time. No one has ever done it, so I get to my put my stamp on it – graciously passing it on to other voices that will come after me to perform the opera. For quite a while, I had been asking my team about working with Matthew Aucoin, so we took a chance and contacted him about the possibilities of what could be. I first fell in love with Los Angeles, in 2014, when I was a winner of Operalia and made my subsequent debut as the Sorceress in Barry Kosky’s production of Dido and Aeneas. Since 2014, I had not been back to Los Angeles Opera, and I was hoping to come back to do something here. Out of nowhere, this beautiful invitation came to sing the role of Orpheus’ Double, and I jumped at it. Instinctively, I knew that the universe had been responding in kind to my thoughts. It is truly the law of attraction.

What is your favorite part? What is the most challenging part?

My favorite part of the opera is Orpheus’ letter to Eurydice, where I feel like some of Matt’s most beautiful writing occurs. It’s both challenging and beautiful because Joshua Hopkins and I are creating this beautiful and heart wrenching letter to his beloved. The harmonies are eerie and the ranges of both Josh and I are intertwined. Much of this role is written, for the countertenor, in a very low range, so that creates a bit of a challenge, but it is manageable. One of the most difficult parts of the role was trying to find the arch of my character and figuring out his why, what and how? What does he say what he says? What does it mean and to whom is he saying? How does he fit in? For me, there has to be a reason for the character to say something and do something. I’m always teaching my mentees that. During the final rehearsals, it finally hit me that I, as Orpheus’ Double, am truly the supernatural part of his being. There is empathy, guidance, strength and an ally-ship that is created. When we sing together, there is this other world aspect to their union, and I help Orpheus to know that everything is going to be okay. That I’ve got his back. It’s beautiful, to me, because it is genuinely a reflection of who I endeavor to be in my every day life.

Can you tell me about your ability to sing as an operatic countertenor? How is this unique?

Yes, I am a countertenor. Typically, we specialize in music from the baroque era, which is from 1600-1750s, and modern music. In retrospect, the countertenor voice is the highest male voice, which is essentially can range from the alto to soprano range. It is unique because there are not many male voices that can achieve this and feel comfortable, especially for the duration that opera requires and to do it without amplification. There are no mics. Just us and our voices and our ability to project, with optimal resonance, over the orchestra. However, the countertenor voice is not as foreign as we’d like to thing. There have been singers, in R&B, gospel music and more who have sung in the range – think back to Frankie Valli, Frankie Lymon or Smokey Robinson. Even singers like Michael Jackson, Tevin Campbell, Justin Bieber have sung in the range. Of course, it’s different with opera, but I’d like to let people know that they know that they’ve surely heard it before. Just in a different idiom.

What is it like being openly gay in the Industry? What are some advantages/disadvantages/is it even a factor?

Being openly gay in the opera industry, for me, has been quite easy. As far as I know, it has never been a factor into whether or not I have been cast for a role. To be honest, I feel that being out and proud, in the industry, is widely celebrated, and it is thrilling to wake up each day, being my most authentic and beautiful self – without apology. I am so blessed to wake up and head into the theater to do what I love. I’d also that the acceptance, in the industry, can certainly be attributed to the work of the pioneers who have come before me, and it doesn’t go unnoticed that I stand on their shoulders.

Why is LGBTQ+ representation important in the Arts?

The LGBTQ+ community is not only important to the arts but to the world. Our stories deserve to be told, and who better to tell them than us. I don’t want to just be the reader of our stories; I want to be the AUTHOR of them! I’m lucky to be a small part of the change agents, in the opera world, working to make this more a reality. In fact, I’m working on a special project to bring a very important work to life, which will focus on a LGBTQ+ icon, whose story needs to be told. Without fail, I can say that I wake up each day with excitement and joy to see where my art will take me and to strongly advocate for all artists, especially those of color. That same euphoria overcomes me, whenever my feet hit the stage, because I know that the stage is my sanctuary. I live to show others what it looks like and feels like to stand in my most authentic self – being all that I was created to be, while being keenly aware of the possibilities that exist to do and stretch myself to do and be more and more….Fiercely determined to be my best self….fiercely dedicated to my craft. What I know for sure is that it gives others permission to do the same.