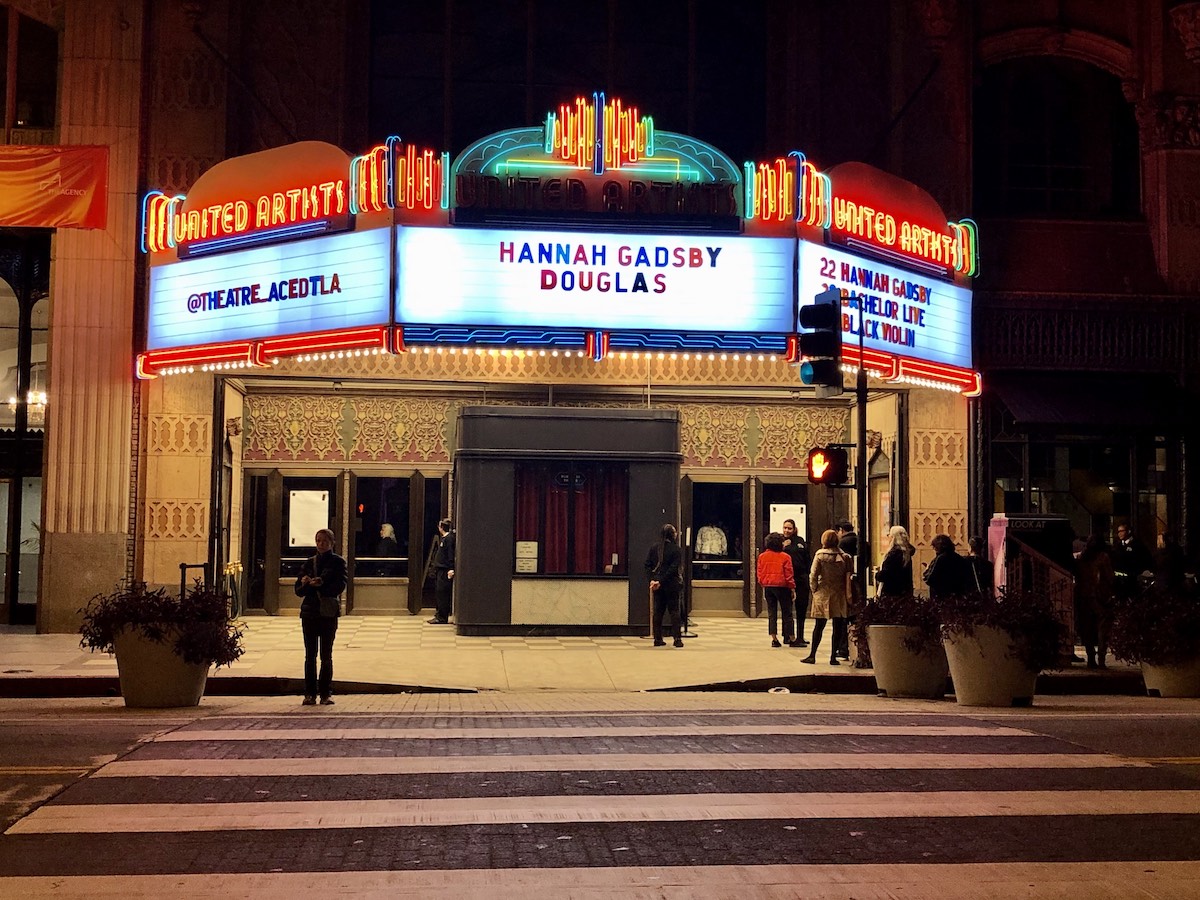 The theater is dark and light casts a purple glow on the outline of a cartoon dog in a gilded frame, presumably the eponymous, Douglas. We’ve all surrendered access to our phones ages ago and we’re exhausted from small talk. Strangers with watches are popular. We wait.

When Hannah Gadsby finally walked onto stage for the 9:30 show on Saturday, the crowd of about 1,600 roared.

“I haven’t done anything yet! Slow down!”

Gadsby shot her new comedy special in downtown Los Angeles at the Theatre at Ace Hotel. Gatsby’s first comedy special, Nanette was released on Netflix in 2018 to wide acclaim including an Emmy for Outstanding Writer in a Variety Show and a GLAAD Media Award.

If you saw Nanette you know Gatsby is witty and cerebral and serious and deeply affecting. She talks about trauma and deconstruct the role of jokes on the marginalized. She repeatedly muses that she should quit comedy. How do you follow…that?

Gadsby immediately addresses the elephant in the room.

“…If you’re here because of Nanette, why are you here?” Exactly.

She continues, “I have no idea of telling what people are expecting from the show.” Neither does the audience.

Here’s what to expect: Expect Douglas to be lighter than Nanette. Douglas, named after Gatsby’s dog, opens with an outline of the show in detail. Professor Gadsby give the syllabus: a story, a misdiagnosis, railing against misogyny, a joke section, some needling and a lecture. Throughout, Gadsby tells the audience that although she will tell them exactly what to expect they still won’t see it coming.

The effect of the outline makes it feel like every joke is a call back. Somehow Gadsby has heightened the suspense by removing it. Everything joke about the patriarchy or prepositions is funnier. Douglas is brilliant.

Gadsby is an architect, with tightly constructed wordplay. Actually a student of art history, she’s an art-chitect of humor. There is no way to leave the show Douglas without knowing a little more about the Renaissance artist Donatello.

Professor Gadsby tells you the ending of her show before it starts. And then sooner than you expect it the show is over, just like she said.

Hannah Gadsby’s second comedy special is currently touring. It will be be released on Netflix in 2020.