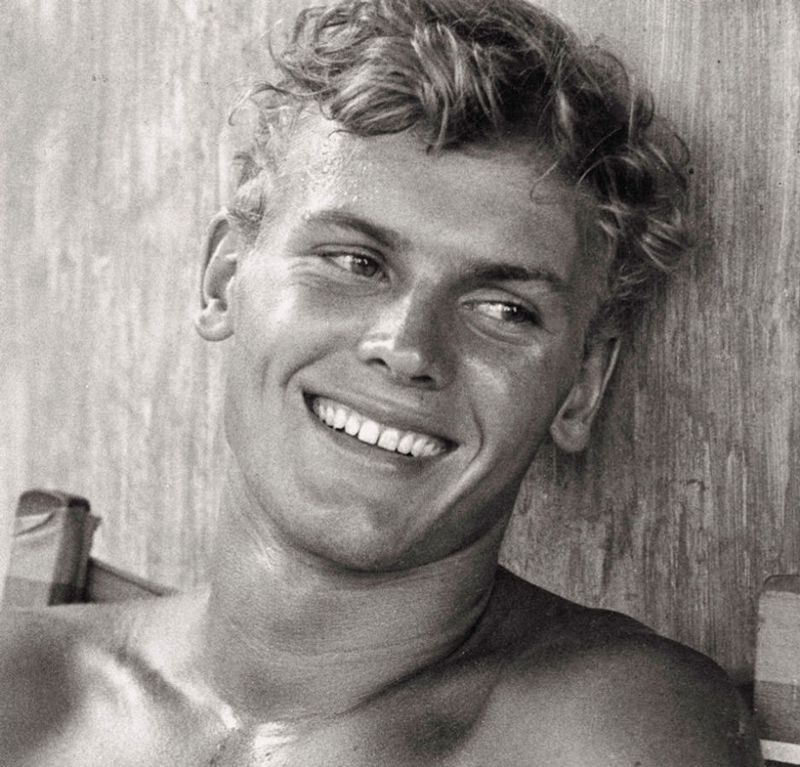 BY DAVID DRAKE  |  “I’m really excited to open the movie in LA,” says Tab Hunter. “It’s like bringing it home!”

After selling out dozens of films festivals since its premiere at SXSW last spring (and racking up a mantle-full of audience awards to boot), Jeffrey Schwartz’s superlative documentary of the life, times, and closeted-to-coming-out journey of the penultimate surfer-boy sex symbol of the 1950s, Tab Hunter: Confidential, screens October 30 at the Nuart Theater on Santa Monica Boulevard in West L.A. Based on Hunter’s best-selling 2005 autobiography, but now featuring a swoon-inducing array of vintage photographs and clips, as well as costarring a glittering host of talking heads — Connie Stevens, Debbie Reynolds, Clint Eastwood, Robert Wagner — you can expect the film to be greeted with klieg lights, tears, and a horde of happy fans at its first West Coast commercial run. “I love the fact that people have been so receptive [to the film],” says Hunter of his months of personal appearances on the festival circuit. “To see how happy people are to meet me, talk with me, take pictures, it’s really been overwhelming.”

For us, too, Tab. It’s been a long road, buddy. Welcome home!

Without doubt, the reaction from the capacity crowd of mostly older gay men at the film’s New York opening earlier this month was nothing but awe, joy, and a surprising sense of pride. Why? Because Tab has survived. And at age 84, in both appearance and demeanor, he has got to be the sexiest octogenarian on the planet. Really. More important, however, is that Hunter has lived to tell the tale when all of his gay male Hollywood contemporaries — Rock Hudson, Sal Mineo, Montgomery Clift, Roddy MacDowell, Anthony Perkins (with whom Hunter had a three-year relationship with in the mid-fifties, and discusses at length in the film) — are all long gone. And while Hunter is quick to declare, “I hate labels,” by the ever-expanding nature of the LGBTQ civil rights movement, there’s room for Tab. We understand him. We have compassion for him. We’ve grown to value his particular struggles as our own because we can now see that they are an important part of our larger historical struggles. For within his living, breathing, still-vibrant person, Hunter holds a fragile yet intricate piece of our own collective legacy of “coming out.”

Furthermore, when Hunter says, “My sexuality is only one thread in my life,” it actually rings with an air of 21st Century modernity. As younger gay men — along with their older brethren — continue to evolve and settle into a more complex and idiosyncratic identities, Hunter’s particular journey of self-realization feels utterly of the moment. That he has done so with such grace and spiritual authenticity (there doesn’t appear to be a bitter bone in his body) makes Hunter an even more welcome member of the tribe.

Now, if you’ve never heard of this guy, just know that before Ashton Kutcher, Channing Tatum, and the boys of Abercrombie & Fitch, there was Tab Hunter. A product of the sun-setting years of the Hollywood studio system, Hunter was groomed by Warner Brothers in the mid-fifties as the best “boy next door” in the world. Of course, that boy had a secret: He was gay. Sent out on “studio dates” with upcoming actresses like Natalie Wood, among others, Hunter rose to become one of the top-grossing stars of the decade with such hits as Battle Cry, The Burning Hills, and Damn Yankees!. At the height of it all, he was outed in the popular scandal magazine Confidential — caught attending an all-male “pajama party.” Interestingly, it didn’t affect his career in the slightest. Whatever personal pain the exposure may have caused Hunter, the incident did not propel him into a “lavender marriage,” such as it did with his closeted peer Rock Hudson. “I thought about it,” Hunter now says of camouflaging his homosexuality by marrying a woman. “I thought about it a number of times, but I just couldn’t. I was just not comfortable with doing that.” A devout Catholic from childhood, Hunter adds, “Of course, I also wasn’t comfortable with talking about [being gay] to anyone either — not my mother, never with my mother. Not my priest. Nor with friends, really. I spoke a little bit about it to my brother when I was in my teens, because I respected him so much.”

This does not mean, romantically, that Hunter was a shut-in. Definitely not a kiss-n-tell kind of guy (but definitely a relationship kind of guy), Tab Hunter: Confidential does manage to pull insightful details from Hunter on his relationship with Anthony Perkins. Along the way, the film also swirls in Hunter’s subsequent relationships with Olympic skater Ronnie Roberson, as well as the man he’s still with today — after 30+ years! — the documentary’s producer Allan Glaser (who promises that when the film is released on DVD, extras will include something not found in the theatrical release: a discussion of Hunter’s affair with ballet superstar Rudolph Nureyev).

Still, on-screen and off, staying true to himself is core to Hunter’s enduring appeal — as is his loyalty to his family. Abandoned by their father as a toddler, Hunter’s mother and older brother struggled to keep it together. As an adult, Hunter would eventually have to face the difficult decision of placing his mom in a mental institution, as well as endure the loss of his mentor-like brother in Viet Nam. Meanwhile, the seismic cultural shifts of the sixties left Hunter a relic of the studio-packaged past. Marshaling on to pay the bills, Hunter spent the next dozen+ years on frequent flyer miles with Spaghetti Westerns, Roger Corman schlock, summer stock, dinner theater. The 1970s saw a smattering of TV guest spots (Love Boat, Hawaii Five-O, Charlie’s Angels) until the day arrived that re-ignited Hunter’s “Sigh Guy” brand — with a phone call in 1980 from John Waters, offering Hunter the lead in Polyester. As the star recalls with a still-sparkling twinkle in his tropicana blue eyes, “The first time I met Divine was at a cocktail party at David Hockney’s place in the late seventies. Hearing him talk about the films, which I’d seen, I thought, “Whoa… I wish I were able to come out of myself like that.” So when John finally did call about Polyester, I went: What the heck, I’ve got nothing to lose. I mean, by that point I couldn’t get arrested in Hollywood. And deep down, I just knew working with John and Divine would be so fulfilling, so creative — which it was! To this day, Polyester is of my favorite films. Come to think of it,” he pauses to ponder, “…in choosing to do that film, it makes me think of something my mother always used to say, “We have to grow mentally, emotionally, and spiritually.” And with doing Polyester, that’s exactly what I did.”

If making the leap from spiritual growth to making love to a 300 pound drag queen in a John Waters movie ain’t an easy jump for some, it is for Tab. And frankly, it is for me too. For as Hunter himself says, “I believe in staying positive. That’s what gives you energy. As I’ve come to learn over these many years, the most important thing is to enjoy your time here.”

—  David Drake lives in Manhattan and is an American playwright, stage director, actor and author.