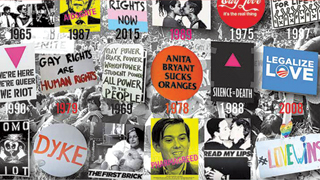 Unpack the easels, dust off the crayons, and wet those watercolors because West Hollywood wants artists to submit designs to use as the poster for next year’s One City One Pride Arts Festival.

The One City One Pride Arts Festival runs for 40 days, beginning on Harvey Milk Day on May 22 and going until the end of June, which is LGBTQ+ Pride Month in L.A. The city goes all out for the celebration, hosting public events and exhibits including film screenings, literary events, theater, dance, music, and art installations.

In an announcement, the city foregrounded the current political climate as the reason behind the theme. “In these times when there is so much hate in the world,” the post said, “what better way to bring us all together than to celebrate our universal bond of love.”

The winning submission will be featured across the city and as the cover of the festival’s main booklet. The winning artist will also receive a $600 prize.

The current iteration of the Pride Festival is a far cry from how it began. The first L.A. Pride Parade – and the first Pride Parade ever – was held to commemorate the one year anniversary of the Stonewall Riots, the 1969 event that set off the modern LGBTQ movement. Facing stiff opposition from the Los Angeles Police Department and its outwardly homophobic chief, Ed Davis, the marchers sought help from the American Civil Liberties Union, who successfully sued the city for the right to march. When organizers included a festival in 1974, it was little more than a street fair, just occupying the parking lot of a mini-mall on Sunset Boulevard.

Today, the festival spans 40 days and the parade has ballooned into a stampede of pageantry and celebration. This year’s festival drew unprecedented crowds and sold out tickets for the first time in the event’s history. According to the organizers, the nonprofit Christopher Street West, around 40,000 people attended the ticketed events. The high turnout even surprised organizers, who were forced to turn away ticketed attendees.

The most recent Pride Arts Festival centered around the theme “I Remember,” an explicit nod to the contributions and sacrifices of the past. The festival kicked off with a staged reading of the play by Patricia Loughrey, Dear Harvey. The event was a turducken (a dish consisting of a chicken inside of a duck inside of a turkey) of LGBTQ history and activism. The play itself recounts the life of activist and politician Harvey Milk through the words of the people who knew him – words that were read by current activists and politicians like trans activist Mariana Marroquin and West Hollywood Mayor John J. Duran.

The art contest guidelines allow ample room for creativity. For starters, the piece must incorporate the theme “Love Is Love.” It also must include, or leave space for, the City of West Hollywood logo, the WeHo arts logo, and the One City One Pride logo. Although not required, the organizers suggest that “ideal submissions will have a neutral background of a single color that is either dark or light so that readable text can be placed over it.”

For more information, to see past examples, and to submit your art, visit the City of West Hollywood’s website.