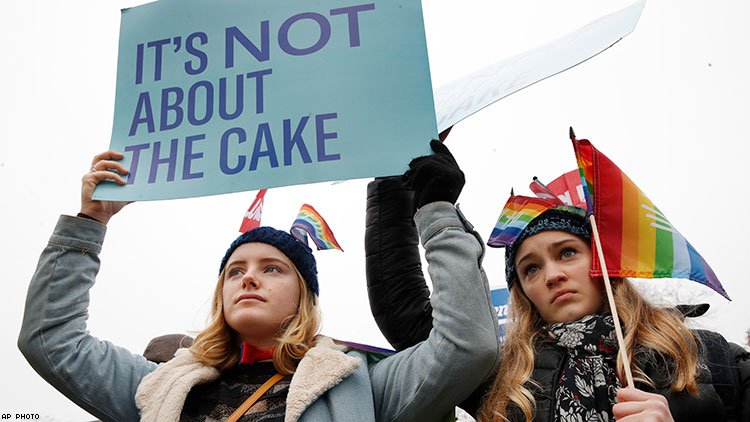 Today, after the news broke of the U.S. Supreme Court siding in favor of religious freedom rather than taking a stand against LGBTQ+ discrimination in the Masterpiece Cake Shop Trial, L.A. LGBT Center CEO Lorri L. Jean put out the following statement:

“In its ruling today, the U.S. Supreme Court ruled on narrow legal technicalities of the case, while reaffirming current discrimination protections for LGBT people at the state level. But at the same time, the justices opened a very dangerous door that could eventually condone legal discrimination against the LGBT community based on so-called religious grounds.
“This case—and now this decision—has confused many well-intentioned people who ask, ‘Why didn’t this couple just go somewhere else to get their cake?’ It is critical to understand that, at its heart, this case is not about buying a wedding cake any more than the sit-ins at lunch counters during the Civil Rights movement were about getting a hamburger and a Coke.
“Moreover, our nation’s history shows us that religion has often been used as a smoke screen to deny rights to people without power, and this is just the latest example of that strategy. Religion has been used to justify arguments against nearly all movements for justice and equality, from civil and voting rights to equal rights for women, reproductive health, and marriage equality.
“The extremists who are driving the anti-LGBT movement in this country and around the world are trying to drive a truck through laws that protect the LGBT community from discrimination by gutting them with religious exemptions of unprecedented breadth.
“Fighting these efforts will be an ongoing battle that will require not only vigilance, but education, to ensure that gains the LGBT community has made in recent years are not reversed on the spurious grounds of religious freedom.
“The voices of extremists who would deny our community equal rights did not win today—but they did not lose either. As we have done throughout our history, the Center will continue to fight these efforts and work to build a world where LGBT people thrive as healthy, equal, and complete members of society.”
By Henry Giardina June 4, 2018
Tags: Anti-Gay Laws, colorado, LA LGBT Center, Masterpiece Cake Trial, Religious Freedom Laws, Supreme Court in LEGAL
Related Posts