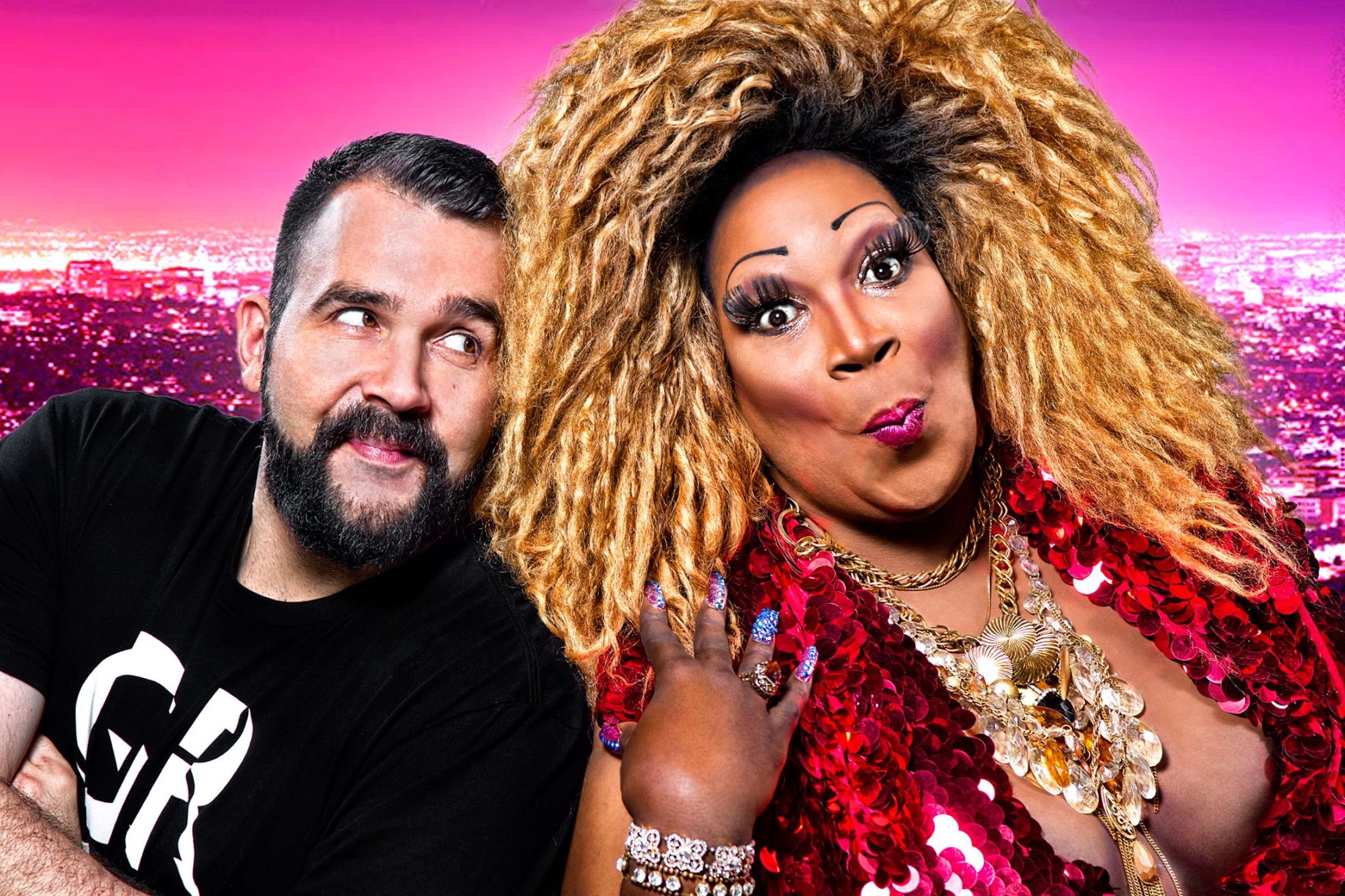 On a Saturday in West Hollywood, I found myself entering the pink-and-purple sequined glory hole that is the “Hey Qween” soundstage. On a set described as “‘The Wiz’ meets the “Facts of Life” gift shop” by the show’s creator and host, Jonny McGovern, I found no shortage of signposts to show me that I was in blazingly queer territory. Exhibit A: A needlepoint sign on McGovern’s desk – in between a ceramic head of the Queen and a pair of lorgnettes – reading “Every Boner is a Blessing,” a collection of G-Strings on the coffee table in the waiting area, and a go-go boy ready to give the show’s next dragtastic guest a lap dance. Needless to say, it was thrilling, life-affirming, and serves as the setting for McGovern’s talk show-cum-bitchfest where drag queens and performers spill tea, throw shade, and talk about artistry.

I spoke with McGovern about the evolution of “Hey Qween” from YouTube channel to international sensation on the eve of the show’s 6th season premiere on StreamTV.

The Pride: Let’s talk about your journey from being a DIY operation to entering the 6th season in style.

Jonny McGovern: It’s been a journey of persistence, of stick-to-itivness. The show started because I had a podcast for going on 11 years. So part of what I love to do, along with comedy and music videos, is trying to talk to other artists and hear their stories. So I really wanted to do a show where I sat down and did that. The original show was a Charlie Rose-style format (without the harassment) where it was just a table and we’d both say “Hey Qween!” and have a chat. But then when I thought about what I wanted the show to be, I knew if my co-host Lady Red Couture, aka the largest drag queen in captivity, was involved, we could have fun and the guests wouldn’t throw me any shade because she’s mean and tough. So we did it that way, and the show was very simple to begin with. A desk and a futon with some sparkles. But then, when the show came out, RuPaul ended up being our first guest. So suddenly what seemed like an experiment about me talking to gay artists for six or seven episodes took on a life of its own. People started wanting to be on it, and it got bigger and bigger.

Yeah, now we’re airing on broadcast TV in Canada, which is really exciting. But it’s mostly about the same things. The show hasn’t changed, the accoutrements have gotten bigger. But hearing gay artists’ stories is what we’ve been about from the beginning.

Do you have any dream guests that you’re hoping to get on the show?

I’m ready for them all right now. They’re not always ready for us. I have had some of my childhood favorites on the show, obviously RuPaul being the first. Jackée Harry from “Sister Sister” was a part of a lot of our childhoods, so that was amazing. Dita von Teese came on and afterward hired me to be the host of her tour. So I think we’re ready for the biggest stars of them all. Lady Gaga, I’m talking to you! Madonna, I’m talking to you!

Have things changed for the show since the start of the Trump administration?

We all know that everybody who comes on the show is on the right side, so we don’t address it so much, but we do address the audience on one of our other shows called “Hot T,” which is about hot topics. We spend a lot of time talking about Trump on that, and about the power to make change is really in the hands of the people who watch the show. We have to take back the power. We try to slip it in there. Even though the show’s about fun and escapism, we know where we’re coming from.

What, to you, is the difference between gay and queer?

I think ‘queer’ is something that can just encompass all of us in that rainbow. Sometimes people, just because of their own baggage, are like ‘oh, I don’t know if I want to be gay,” which somehow means in their minds that you have to go to this disco and wear a tanktop. Sometimes people find gay limiting, because of their own experience of what ‘gay’ has been portrayed as in pop culture. And I certainly love all those things. I love glitter, I love rainbows, I love crowns and bright colors, that’s what I’m all about. But I think we’re in a universe where people are writing things like ‘masc 4 masc’ on their Grindr profile. Everyone’s dealing with internalized homophobia. But I think there’s something about ‘queer’ that’s a little more generous. I think especially today when people are not wanting to be labeled one thing, ‘queer’ has a little rock n’ roll behind it. I think ‘queer’ is something we can all hold onto, and it’s more of a spirit.

What should we be looking forward to in the upcoming season?

Obviously the show looks better than ever. Really, if you cut to clips of the old show it’s come from a bare-bones situation into something that looks like it did in my fantasy. In terms of the upcoming season, we’re giving you the best queens, the best stories. People know that when they come here they’re in a space where they can speak their truth, where they can spill tea, settle scores. Our guests come to play, and they very rarely bullshit me at all. And most of them are young, so they’ve been seeing what I’ve been doing since they were in Junior High. It’s going to be an incredible season, and I can’t wait for people to see it.

Catch the new season of Hey Qween on StreamTV or at HeyQween.tv