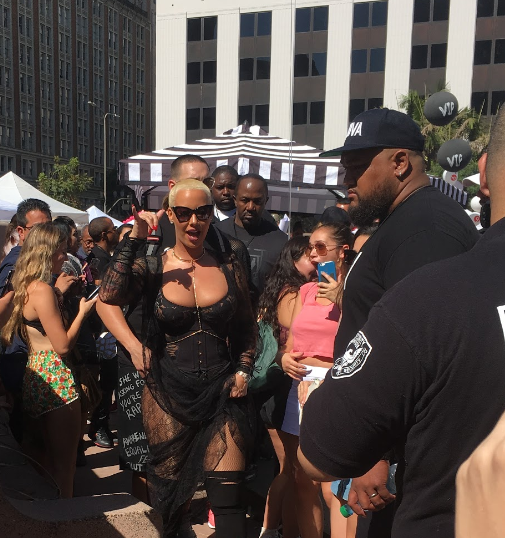 The transnational movement that is SlutWalk has gained popularity after feminist, socialite, and activist Amber Rose took over the project a few years ago to create Amber Rose’s SlutWalk Festival here in the states. Rose took on the idea of women marching to reclaim the word “slut” and all its negative connotations, calling the march a safe haven for “women who have been through shit.” This year marks the third annual SlutWalk, which will, as usual, take place at Downtown L.A.’s Pershing Square.

The event creates an inclusive and supportive space for people to enjoy a time when judgments are set aside and people embrace each other for who they are. Walkers can wear a nun’s habit, wear nothing, or wear anything and everything in between. The only rule is that any racist, sexist, xenophobic, homophobic or transphobic behavior and other types of harassment will not be tolerated. Any abusive language or actions will not be condoned and are highly encouraged in order to keep the event peaceful and not incite violence. SlutWalk encourages creating conversation, healing, and having a good time. You can come as an activist or just a supporter and hang out in a positive space. It’s an intersectional feminist heaven that people like Amber Rose hope will permeate into everyday culture.

There will be on-site HIV testing, sexual awareness booths, and many free condoms. After marching behind Amber Rose and other powerful people in solidarity, there will be many vendors selling refreshments and food, including L.A. favorites horchata and tacos. Most of the festival takes place after the march with many booths offering pole-dancing classes, vibrators, feminist art and more.

Every year garners a list of celebs, expert panelists, and entertainers promoting the feminist message of equality. There are surprise guests each year aside from the lineup and last year’s attendees were graced with the presence of Blac Chyna right before she gave birth to her daughter, Dream. Amber Rose always tries to bring Blac Chyna out but notes that although she believes in feminist ideology she’s not as outspoken and a little shyer. So she may very well be one of the surprise guests this year. Guests will also notice some famous faces among the crowd attending SlutWalk. This year’s lineup includes host Lilly Singh, headliner O.T. Genesis, music by DJ Carisma, a performance by CupcakKe and much more.

This year’s Amber Rose SlutWalk also includes a special women’s conference, OPENed, put on by the Amber Rose Power Foundation and USC Dana and David Dornsife College with keynote speaker Debbie Allen. The discussion embraces those who live life on the fringes of society because of their self-expression and encourages families and businesses to be open to accepting them.

The festival will also be much different than last year because it is operating under the Trump era where the stakes are higher than ever. Each year there are those who stand outside the event to harass and pickett the movement. How this will translate in a Trump era is unclear, but it’s something that Amber Rose has condemned since the rise of Trump. In an interview with Yahoo last year, she made it clear that she does not tolerate Trump’s behavior against women and it’s the driving force behind SlutWalk.