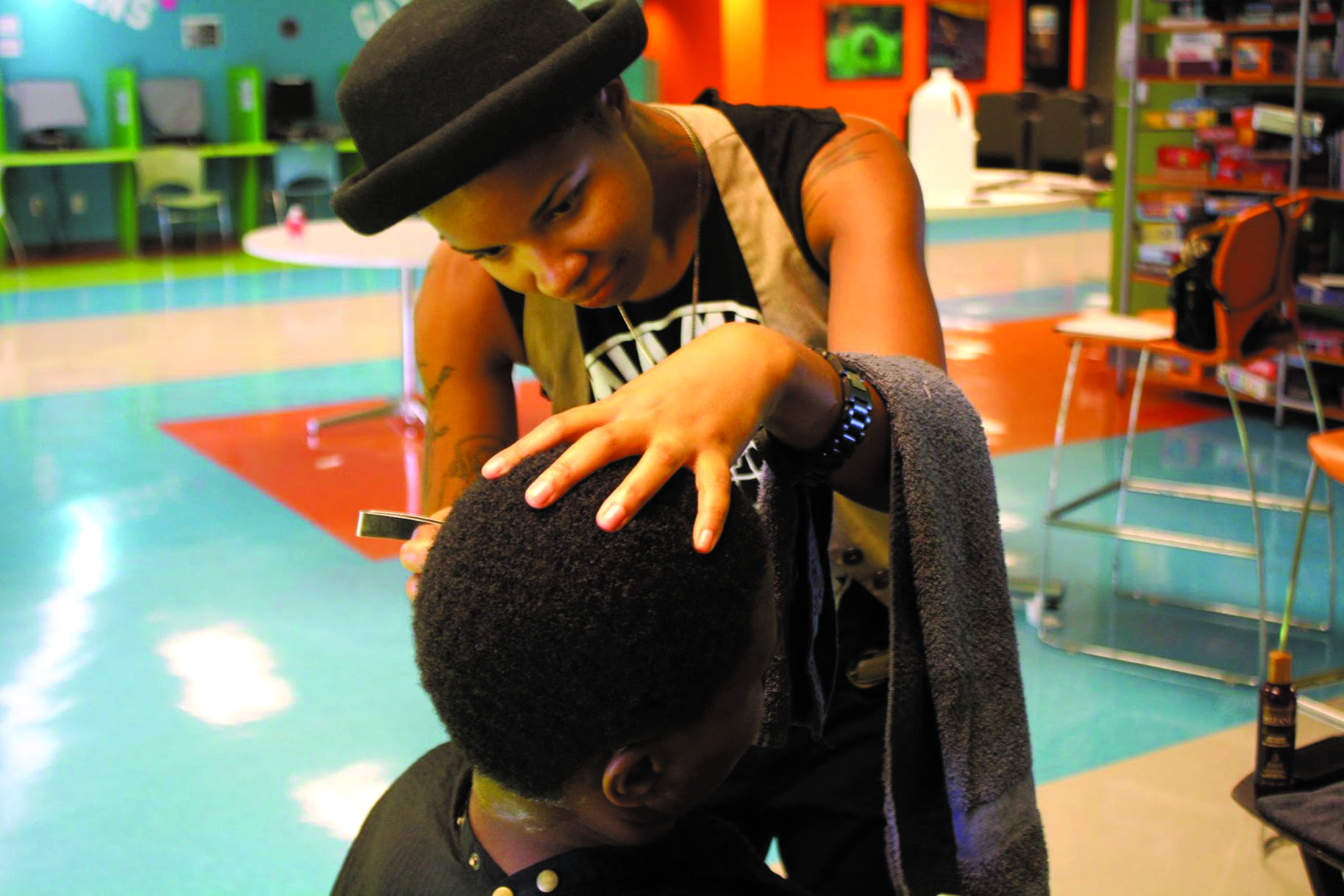 It’s not easy to find spaces that openly celebrate the lives of trans, non-binary, and gender nonconforming folks even here in Los Angeles. For a young person, finding your community can be a years-long journey. Luckily, a few local entities are showing up for queer youth in a major way.

“We’ve been doing ProjectQ now for about five years, and it pretty much started in the same vein as [fellow queer-owned East side operations] Everybody Gym and Folklore Salon,” said Madin Ray Lopez, who created ProjectQ with their wife Sabine Maxine Lopez. “Just having the knowledge of how important it is to have space for queer and gender nonconforming people. So many people can’t afford to have services done at all, never mind having it done in a space where they feel comfortable.”

The project began as a way to offer haircuts and hair styling services for queer youth without access through the ProjectQ ‘Hairstream’ mobile salon, a 1950s trailer that serves as a self-esteem building vehicle (literally) for queer kids looking to come into their own. The ball is both a kick-off to L.A. Pride and a send-off for ProjectQ’s Pride tour, when the trailer – acting as both salon and “mobile safe space” – will go on tour across the country, starting in Los Angeles.

For a lot of queer kids and teens, finding out who you are has a lot to do with figuring out how you want to look and present in the world. That means that the right cut, color, and style can be crucial to a growing kid’s self-confidence. The ProjectQ Ball is more than a fundraiser: It’s a way to offer a vision of the world in which trans and gender nonconforming folks thrive and prosper as adults. It’s also a glamorous and creative rebuke to the problem finding formal wear as someone whose gender falls outside the binary.

“I first realized how hard it is when Sabine and I got married,” said Madin. “I had no idea what I was supposed to wear! I’m gender non-conforming, but I’m also stylish. I didn’t want to just wear a suit. I didn’t want to look too feminine. There’s just – and how was I going to wake up that day? What gender was I going to feel that day? Who knows!”

One of the most rewarding aspects of the Ball, Madin explained, is watching the kids themselves grow, be celebrated, and outfit themselves in the kind of clothes they might only have dreamed about.

“We have about 10 youth from the center that will be able to attend, and we have an all-queer suit line (donated by Leon Wu of Sharpe Suiting) that will get suits for the night,” Madin explains. “My wife Sabine took some of the more female-identified folks shopping for ball gowns. Some of them had never been inside a women’s dressing room before.  A lot of these kids wouldn’t go in on their own. They wouldn’t be able to find them on their own.”

The ball will also feature a reward ceremony to honor the ProjectQ youths who have stepped up the most. “We have four of the youth that we’ve just seen grow exponentially, over the years,” said Madin. “They’ve also turned around and started to help out kids younger than them. Even at their age and in their space, they realize that they can take whatever that they have, even if it’s just self-confidence, and pass that along.”

Small businesses from L.A.’s queer community wasted no time in coming forward to partner with ProjectQ for the event, including Everybody Gym in Glassell Park, Folklore Salon in Echo Park, and Otherwild in Loz Feliz. “All our partners have a space that you know you can walk into, you know you won’t be judged,” added Madin. “It’s no questions asked, other than ‘what are your gender pronouns.”

As for the special performance by stand-up comedian (and star of SeeSo’s “Take My Wife”) Cameron Esposito, well, she heard it through the grapevine.

“It’s a funny story,” explained Madin. “Cameron gets her haircut by Pony [Lee], who runs Folklore Salon, a queer salon in Echo Park. She’s been going to him for a long time, and she talks about queer hair a lot in her standup. Pony was a little birdie in her ear. And in true L.A. fashion, Cameron reached out and said, ‘Hey, can I help?’ It was so great that she was willing to be a part of it. And that she as a queer person, was like, ‘yeah, I understand how much this helps, and I want to have other queer people have what I have.’”

ProjectQ is just a part of what L.A.’s Eastside is doing to foster a positive sense of community for queer youth. By bringing people together to celebrate, emphasizing the positive, and giving voice to the importance of queer style, they’re reshaping what it means to be a queer adult for those to whom it matters most: The next generation.