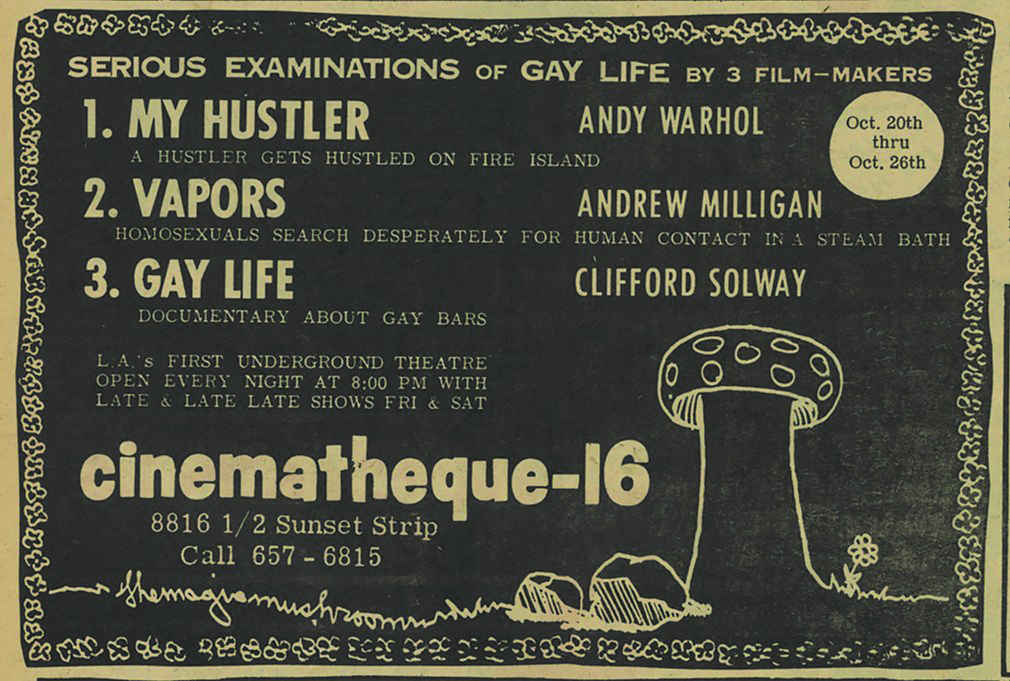 BY J.J. ENGLENDER| With the success of repertory theaters springing up in L.A. in the 1960s – such as the 800-seat Cinema Theatre on Western, with its popular ‘Underground Cinema 12’ program (put on by Michael Getz – L.A.’s underground film culture was gaining ground.

In 1964, exploitation film producer Robert Lippard purchased a theater on the Sunset Strip. The theater only had 16mm capability, and Lippard’s intent was to screen nudie-cuties. But when the Strip became a hotbed of hippie culture, his programming choice proved tone-deaf.

The theater was later taken over by Lewis Teague, an NYU graduate in film studies. Teague offered to run the theater as an art house, and after introducing new weekly programs (featuring European art films and silents) renamed it Cinematheque-16.

The art films didn’t fare much better than the previous nudies. Initial programming was certainly a mixed bag. In 1966, what was billed as ‘A Horror Show’, gave a stunned audience the following; “The Cabinet of Dr. Caligari” (Robert Wiene, 1920), Triumph of the Will” (Leni Riefenstahl, 1935),  Buñuel’s “Un Chien Andalou” (1929) and “Way to Shadow Garden: (Stan Brakhage, 1954.)

But after adding Psychedelic Film Trips to its advertising, locals began to sit up and take notice. Comedian Lenny Bruce closed his last professional performance at San Francisco’s Basin Street West, he allowed producer John Magnuson to capture the show. The result ended up becoming the 65-minute film “Lenny Bruce” – shown at Cinematheque 16 in 1965.

Experimental filmmakers such as Shirley Clarke, Jack Smith, Robert Kramer, Gregory J. Markopoulos, Thomas Reichman, Robert Downey and Kenneth Anger had their work shown; Downey’s “Chafed Elbows,” “No More Excuses,” and “The Sweet Smell of Sex” (“A drama of people who claw their way to the bottom”) and Anger’s “Scorpio Rising” all were given ample time (and billing) at the Sunset Cinema. Warhol movies found a home there – most notably “My Hustler,” which ran with two other films featuring “serious examinations of gay life” in 1966. Warhol’s “Bike Boy” had its West Coast premiere at the theater in 1967.

The Doors’ frontman Jim Morrison premiered his 40-minute “Feast of Friends” in 1969, on a double bill with Warhol’s “I,  a Man.” This was followed by readings from Morrison’s “An American Prayer.”

The success of the Sunset Strip location spurned two more theaters in San Francisco and Pasadena (which didn’t last long.) Promoting itself as “Possibly America’s Most Unusual Theatre”, the Pasadena Cinematheque 16 opened at 7:00 PM on April 25, 1968, and debuted with Warhol’s “latest triumph”, “I, a Man.” The second feature was the 10-minute animation, “Lapis” (James Whitney, 1966.)

Programming remained inspired through the late ’60s with Paris Earl in “Johnny Gigs Out”  (also screened at the Watts Summer Festival) “Pimple, Pimple, It’s Only a Pimple” and “Portrait of Jason” (Shirley Clarke, 1967,) lauded by the press as: “A landmark in both queer and confessional cinema.”  In 1968, the JFK assassination documentary “Rush to Judgment” (Mark Lane, 1967) was screened.

But if documentaries with Huey Newton in jail weren’t your cup of PG Tips, there was “The Legend of Lylah Clare” (Robert Aldrich, 1968) over at the Loews Colorado, “The Graduate” (Mike Nichols, 1967) at the Hastings Theatre, or Sammy Davis Jr. and Peter Lawford’s nutty caper, “Salt and Pepper” (Richard Donner, 1968) at the Monrovia Big Sky drive-in.

The Pasadena Cinematheque 16 was located at 73 North Fair Oaks Avenue. After closing down, the site became an office building around 1981.

All photos courtesy of Adsausage.