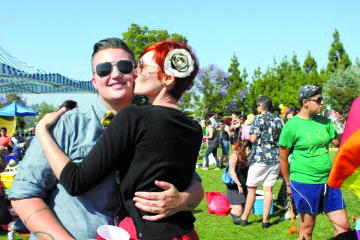 It doesn’t seem like a full decade has passed since L.A.’s lesbian answer to Pride first kicked off. What started an answer to the more corporatized glitz and glamor of the L.A. Pride parade has become a legend in its own right.

“When we first started organizing Dyke Day, we didn’t feel like West Hollywood Pride was something that made us very prideful,” Kat Laukat, one of first five original organizers of the day, told KCET.

In 2007, five women got together to plan a less “Boy’s Town” oriented celebration for Pride. They landed on Barnsdall Art Park in East Hollywood for a location and opened the event up to everyone. It would be free, kid-friendly, and, most importantly, totally chill.

The turnout was epic. In past few years, Dyke Day has relocated to Elysian Park on the East Side to make room for the growing number of attendees. Last year’s celebration hosted over 600 people in one space, including families, inclusive religious groups, and nonprofit communities from all across L.A.

This year’s celebration promised something even more special, in honor of its tenth year in business.

Dyke Day isn’t just a celebration of being lesbian or queer. It’s a celebration of being in L.A., where the persecution and fears that exist in so many other cities across the country are far less present. “There’s no doubt that you get a lot of privilege being in a large city where being gay is much more of a norm,” Laukat told KCET. “In small towns in the U.S. and across the world, having an event like this wouldn’t be an option unless you want to get killed.”

The support from the community is also a crucial part of what keeps Dyke Day thriving.  The event is completely community funded through donations and the help of volunteers. It’s a true example of how a small (and always growing) community can positively shape the culture of even the largest of cities.