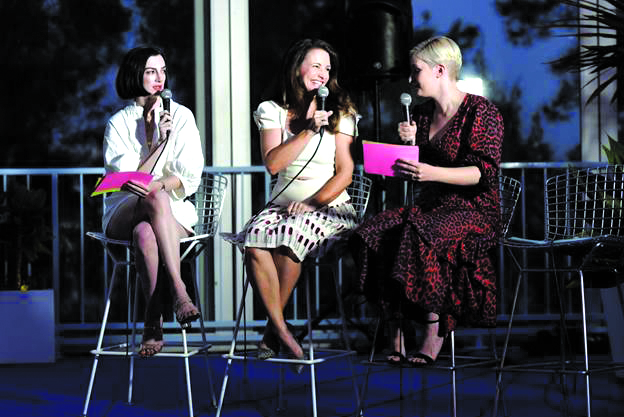 Just because “Sex and the City” was a quintessentially New York show doesn’t mean that L.A. didn’t glom onto it just as much as every delusional young woman that moved to the Big Apple as a direct result of Carrie Bradshaw’s impossible-dream lifestyle. And yet, those who went to the West Coast to pursue acting pre-Time’s Up might be regretting it just as much as those women now still paying off their credit cards from time spent trying to “look for life and love in the big city,” as Laney Berlin (Dana Wheeler-Nicholson) so condescendingly put it in Season 1.

Despite “SATC’s” lie in peddling the grand myth about New York’s potential for fulfilling all your fantasies both sexual and career-oriented, people still love it. And those people of the Angeleno persuasion recently chose to celebrate the show’s contribution to the pop culture lexicon (i.e. “funky spunk,” “he’s just not that into you,” “my vagina’s depressed,” etc.) at The Standard on June 7, just one day after the series originally premiered in 1998. Hosted by Lauren Garroni and Chelsea Fairless, the duo behind the Instagram account very responsible for keeping peak interest in the show alive, @everyoutfitonsatc, the venue for the party – The Standard in Hollywood – was, of course a deliberate homage to the two episodes it took to wrap up the narrative of the quartet realizing they kind of hate L.A. and just want to get back to New York, even if everything is a little too “bottom shelf, paper bag” there (Miranda, again, would have fared better in the NYC of now.)

In keeping with the lauded specificity that @everyoutfitonsatc has become known for (Thank God, because otherwise Garroni could never live down her smearing parodies of L.A.’s most beloved citizen Lana Del Rey with Whitney Rice in said role,) the event was titled “That Bunny Stole My Bag!” Loyal viewers will of course remember this as Samantha’s exclamation after she loses her fake Fendi and assumes one of Hugh Hefner’s house bunnies stole it. Because what would an L.A. episode in the early 00s be without a little cameo from Hef? Even better than that, however, was Carrie Fisher’s (another late legend) appearance as the true owner of the home that Carrie thinks her current suitor, Keith Travers (Vince Vaughn, who just became a bona fide L.A. legend for getting a DUI,) owns. Alas, like everything that the short-lived cast of characters (including Matthew McConaughey as himself) in the two-part storyline that commenced with “Escape From New York” come to represent: L.A. is a carnival of illusions best only visited for no more than a five-day stint if you at least want to leave with your original body parts intact (pubic hair included.)

But L.A. still has a believer in Charlotte, with Kristin Davis making an appearance to give prizes to the best a.k.a. most “SATC”-dressed guests. Now if only “The Carrie Diaries” could get be given a second life if just as an excuse to throwing a party at the Chateau Marmont posing as a Chelsea Hotel pop-up.