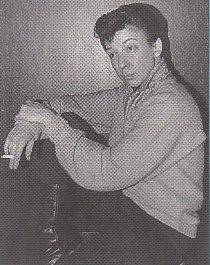 Frankie Hucklenbroich’s “A Crystal Diary,” published in 1997, opens with a description of “bouncing baby butches, boiling and bursting with glands.” They stand outside of the lesbian bar they’re too young to frequent, studying the adult butches and femmes as they enter and exit in pairs, wondering what it would be like to be them, wondering what it would be like to fail:  At sex, at intimacy, at everything. But most of all, at doing what Hucklenbroich’s narrator Nicky refers to as the trademark of every great butch: Eating out.

“What’s it taste like? What about germs? And how the heck are you gonna breathe? And if you don’t/won’t do It, then can you still be successfully gay?”

So begins Hucklenbroich’s painful, energetic tale of growing up butch in the ‘50s and ‘60s, bouncing from the heroine’s hometown of St. Louis, Missouri, to the three gay capitals of the country – New York, San Francisco and Los Angeles – and back around again.  As with anything written from and about this era, the evidence of a painful coming of age are everywhere, from Nicky’s first love (an L.A. teen model named Jill) to her first arrest, to witnessing her first butch idol come back from war and get beat up for asking for a haircut at the men’s barbershop – a shop the narrator’s father happens to own.

Drawn from Hucklenbroich’s own experience growing up gay, “A Crystal Diary” is a fast, punk recounting of life lived in the margins, at times cringingly painful, at times exhilarating to read. The exhilarating parts, more often than not, take place in the L.A. of the 1950s, where “Diary’s” narrator lands after a period of searching. Nicky’s descriptions of posh L.A. are almost Gatsby-esque:

“I’d been to plenty of parties up in the Hollywood Hills – you know, the kind where the word and the address travel from bar to bar like a brush fire and everybody piles into cars and heads for the action – and they were all pretty much the same. Loud and raucous, packed with dancing, groping bodies, with the booze flowing and the grass blowing freely.”

As a young butch, she spends her unemployment “kill[ing] time sitting with the gay boys in Coffee Dan’s.”

Per researcher and writer Jan Whitaker, who writes the blog “Restaurant-ing Through History,” Coffee Dan’s had a revolutionary function similar to Cooper’s Donuts, the site of one of L.A.’s first gay revolutions. Started as a San Francisco speakeasy, by the late 40s: “Coffee Dan’s expanded into a small chain and the Hollywood location became something of a gay hangout in the 1950s, a role played by all-night cafeterias such as Stewart’s in NYC’s Greenwich Village.”

An incident in Hucklenbroich’s book, taking place in the late summer of 1958, shows the grittier side of Coffee Dan’s, where cops would hang out in the hopes of busting gays and lesbians who aren’t wearing the requisite three items of male or female clothing. NIcky avoids this by wearing female undergarments at all times in case of a stop n’ frisk.

In 1958 Los Angeles, Nicky pounds the pavement looking for a job. She’s too butch to get hired as anything but a door-to-door salesman (a job she soon quits) and even when femme’d up can’t quite manage to get hired by a sexist, homophobic society:

“Look, dear,” says Nicky’s caseworker at the employment agency. “Mr. Siebert called me back. He wanted to know why I’d sent him such a terrible tom girl.”

Against it all, there’s love, the hope that things can get better, and the idea of a great big beautiful, butch network stretching across this country of ours, making it sharper, better, and more civilized each day.