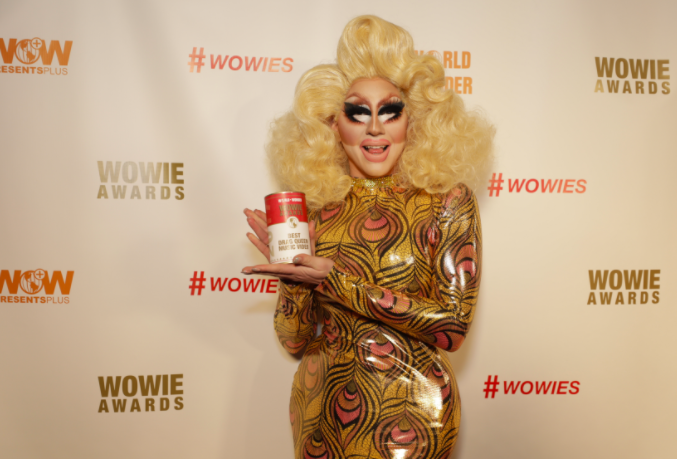 Armed with Andy Warhol-style Campbell’s Soup Cans, the winners of World of Wonder’s 13th WOWie awards strutted down the red carpet in style Dec. 7. At any World of Wonder event (they’re the folks that brought you “Drag Race,” remember?) a spectator is bound to see a kaleidoscopic celebration of all things queer, crude, coarse, and campy. And wigs. You’re going to see a lot of wigs.

This year’s WOWie awards were no exception to the rule, hosting a fierce parade of honorees from YouTube legend Chris Crocker (of “Leave Britney Alone” fame) to drag diva Trixie Mattel. But the event wasn’t all about the winners. Some truly legendary icons were also in attendance at World of Wonders “WoW Presents” space in Hollywood, like famed club kid James St. James and Gia Gunn. The WOWie award shows have set themselves apart from more standard fare by presenting the types of awards that we actually want to see bestowed upon our favorite cultural movers and shakers of the year, such as Best Meme/GIF AKA the ‘I Gotta Send This To Everyone’ Award (it was Viola Davis leaving with her purse in “How to Get Away with Murder,” and you’ve definitely seen it around. The WOWie “worst of” categories were also truly choice this year, with much-despised newscaster Tomi Lahren sharing the title for “WORST Twitter Award aka WORST Use of 140/280 Characters” with Donald Trump, Donald Trump Jr., and Ivanka Trump.

Other notable winners of the evening included “Resistor of the Year AKA the Power to The People Award,” which went to 49ers player Colin Kaepernick, “Best Lips AKA the Pucker Up Award,” given to Raven, and Surprising Political Voices AKA the Look Who’s Political Now Award which went to…who else? Queen RuPaul herself.