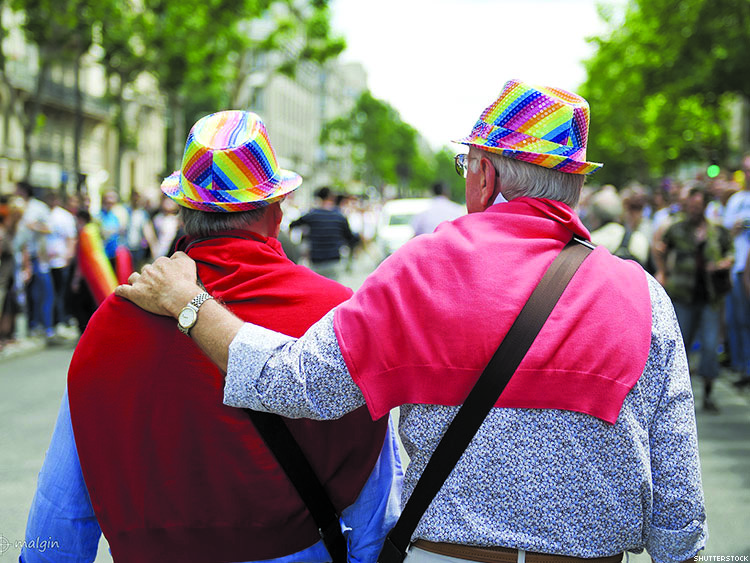 Anyone who knows their history knows that we didn’t get our rights without a fight. That fight was long, it was hard, it spanned decades (centuries, in fact) and it was led by the part of our community that’s now reaching old age. We have the pioneers of the ‘50s, ‘60s and ‘70s to thank for our current resources in L.A., including the L.A. LGBT Center (formerly the Gay Community Services Center), the ONE Archives at USC, and so much more.

But what happens to that community in Trump’s America? With the recent withdrawal of a rule that would have ensured that same-sex spouses get treated the same as opposite-sex spouses in long-term care facilities across the country, along with a barrage of other proposed healthcare cuts affecting LGBTQ+ seniors, the queer community has a new call to action. But with the focus increasingly turned toward getting the proper healthcare and emotional support for LGBTQ+ youth, how can we make sure we’re not leaving our senior community behind?

Thankfully, L.A.’s LGBT Center is moving full steam ahead on plans to create a spacious new facility for LGBTQ+ seniors in need of shelter, support, and affordable healthcare.

The Los Angeles LGBT Center has had plans for expansion for a while now. Their focus is on getting more housing for the growing homeless population, knowing that a large number of those people forced to be living on the streets are a part of the LGBTQ community, as well as building affordable housing. Thanks to the support of Councilmember David Ryu, among others, the Los Angeles City Council approved $4.9 million in Community Development Block Grant for affordable senior living at the LA LGBT Center’s Anita May Rosenstein Campus on North McCadden Place.

Affordable housing is a major issue in the area of Hollywood, which seems to have a new condo development sprouting in an historic and formerly affordable part of town a couple times each year. The LA City’s funding of this new 100-unit development for LGBTQ+ senior housing underway and set to be available for living in 2019 has provided not only a major source for the LGBTQ+ community but also a means to fight back against gentrification. The housing crisis the city of Los Angeles is facing puts many people, especially minorities like LGBT seniors, at risk of homelessness. This affordable housing project will provide the LGBT seniors of LA a chance to not only stay housed but safe and nurtured with their community.

Councilmember Ryu released a statement last week on behalf of gaining the funding for this project, “Today, we’ve crossed a major threshold making this affordable housing project a reality. Los Angeles is facing an unprecedented housing and homelessness crisis. I’m proud to see City Council invest this money in a solution – and bring this project that much closer to providing homes and changing lives.”

This major break into getting a step closer to solving the housing crisis came after Ryu’s motion to fund $8.6 million to youth housing at the LA LGBT Center went through this year as well.

The LA LGBT Center’s Anita May Rosenstein Campus, which was also funded by philanthropist Anita May Rosenstein, will not only include senior housing but also 100 beds for homeless youth, a commercial kitchen and more to benefit Los Angeles’ LGBTQ community and the city’s growing housing crisis.

The new campus is set to be completed by early 2019 as the Center marks its 50th anniversary.