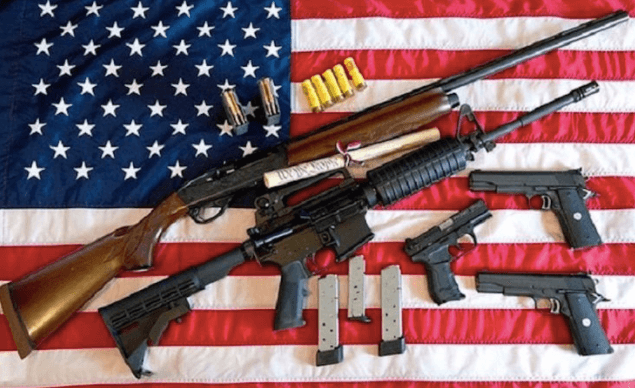 I’ve heard this argument floated around for years, but it came to a head when I heard an acquaintance make it in the wake of the Douglas High shooting. Sure, he admitted, one person can inflict staggering damage with one gun—but imagine what an entire government can do when it’s people don’t have any. He pointed to Nazi Germany, the USSR, and North Korea. Had there been more guns and less gun control, then the citizens of each country would have resisted the oppressive regimes.

I didn’t know how to respond at the time.

Seventeen people are dead—shot at a school. Before that, there were 4 killed at a car wash. A little further, 5 murdered at another school—an elementary school that time. Before that, 26 at a church service. Then there were 58 at a concert. And then 5 at an office. And 4 at a bank. And another 4 at a club. And 5 again at an airport. And that’s only the last year.

Did you have the patience to read through that whole list? Because I hardly have the patience—the emotional stamina—to care each time it happens again and again and again. Especially since Sandy Hook came and went without any change, I’ve become increasingly fatalistic on the subject. But with politicians completely hamstrung to do anything, it seems as if the best thing we can do is challenge the mythology that props up our gun-obsessed culture.

Let’s talk about the facts. The overwhelming consensus among historians and experts dismisses the argument that gun control played a causal role in authoritarianism. Dictators do not boil down to the absence or presence of guns. If we did follow that logic, we should make all military instruments available to the civilian population as a check on the government. I mean, anything short of leasable tanks and any resistance would be like holding out a sheet of paper to block a bayonet. You could probably mount a decent guerrilla campaign for a bit, but without control of manufacturing centers, it’d end up like the Spanish Civil War (an instance in which guns were not enough to stop a fascist dictator).

But that gets away from an even bigger point. What are we supposed to make of every other wealthy country on Earth? Is Japan inching closer to totalitarianism? Is Britain ripe for a military coup? Is Justin Trudeau plotting to install himself as President for Life? Guns are not what keep us safe from power-hungry despots. Impartial courts, checks and balances, dogged journalists, and informed and active citizens keep us safe.

Nina Simone once described freedom as the absence of fear. You know what I thought about when I saw Black Panther on Friday, sitting in the theater and waiting for the movie to start? Aurora. You know what I thought about when I went out afterwards? Pulse. And you know what I’ll think about now when I drive by my alma mater, North Hollywood High School? Douglas High. So no, I have no stomach for hypothetical future-tense tyranny when we already live under a very real tyranny right now.