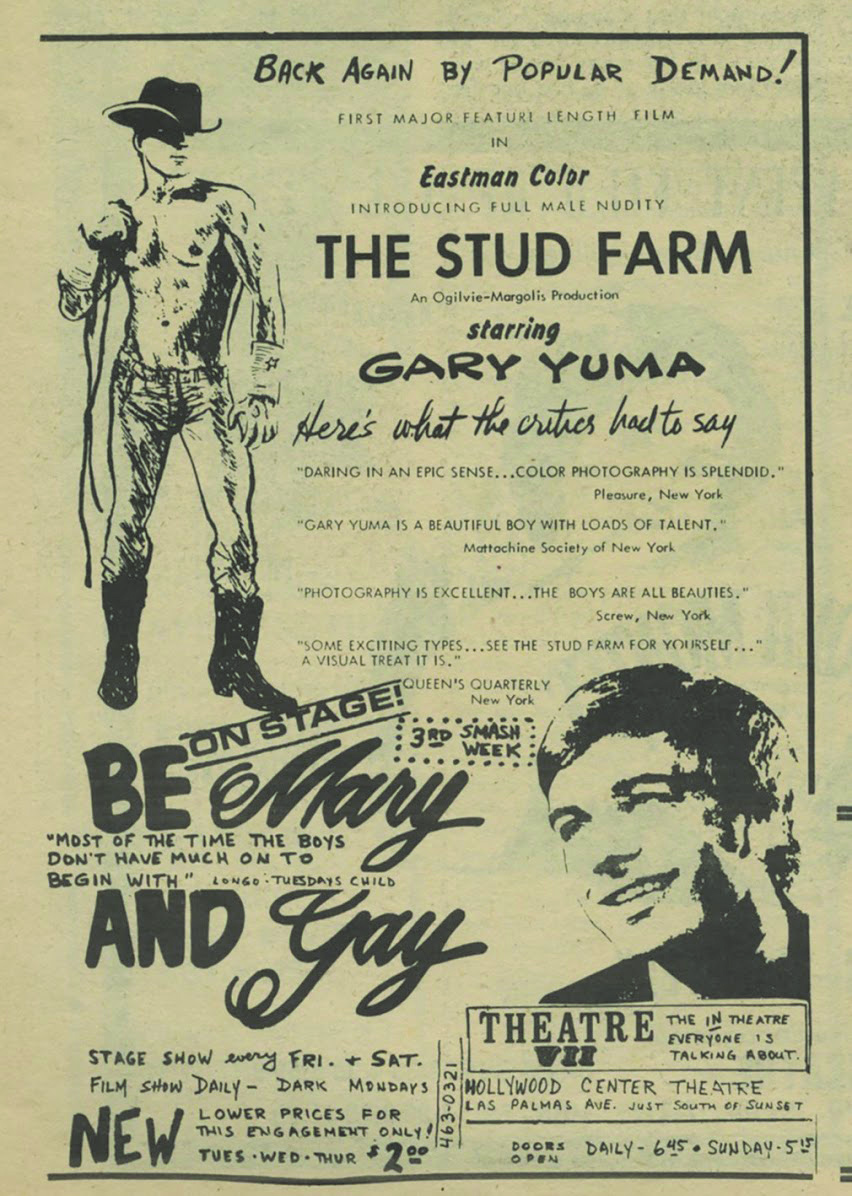 RESEARCH BY J.J. ENGLENDER| In the ‘60s and ‘70s, actor and sometime-producer Gerald Gordon was an exceptionally busy man. His list of productions during this time included (but were not limited to) Barbara Allen’s “Dark of the Moon”, “The Wind in the Willows” and Neil Simon’s “Come Blow Your Horn.” But before all this, in 1963, he took to the stage of the Hollywood Centre Theater on Sunset to mount a production of “The Fantasticks” with the Los Angeles Youth Theater.

Both the venue and the producer, however, had many other, much gayer projects in their future.

In 1973, Gordon directed his first feature film, the story of a gay sculptor called “So Long, Blue Boy.” Reviewing the R-rated movie, the Advocate claimed that: “This film will set public acceptance and newfound tolerance of homosexuality back 50 years…” Yikes.

As for the theater, it experienced a tiny, intensely queer revolution in the next few years. In 1969, the Hollywood Centre Theater shed its live theater roots (but barely) to become Theatre VII (‘Where friendliness is contagious.’) Acts like Charles Pierce, who billed himself as “The Master of Camp,” headlined, bringing live gay theater to a hungry Hollywood audience. But another transition was still in store for Theatre VII. Just a year later in 1970, the theater changed course, now billing itself as ‘The only gay theatre like it anywhere!’ as well as “the IN theater everyone is talking about!” and offering live male stage shows. Theatre VII (now known as the Mark VII) a home for the dazzlingly smutty likes of “Be Mary and Gay” and more traditional porno offerings like “Stud Farm,” the tale of a young man who goes to visit his brother on a ranch only to find that he’s been “converted” by all the “homosexuals” living there. The motto of “Stud Farm,” as you may already have guessed, is “if you can’t beat ‘em, join ‘em.”

Meanwhile, across town at the Park Theater on Alvarado, a small offering called “These Boots Were Made for Licking” promised to break down “all male nude barriers.”