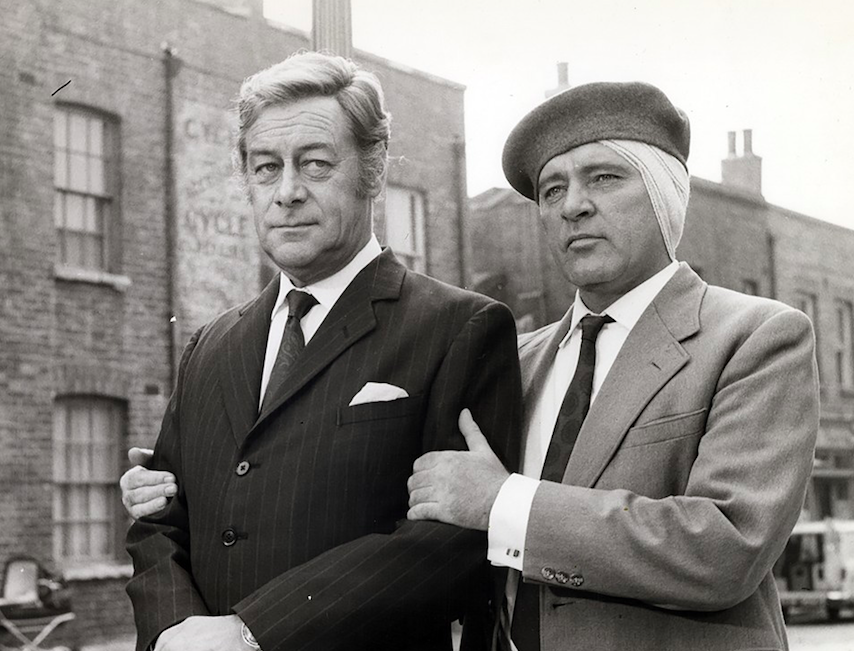 In 1969, 20th Century Fox had the bold idea of assigning “Singin’ in the Rain” director Stanley Donen to “Staircase,” a drama that (tried, at least) to paint a sincere portrait of a gay relationship without taking an inherently judgmental or pitying attitude.

Did it succeed? Well, not quite.

The legendary British actors Rex Harrison and Richard Burton took on the roles of lovers in “Staircase,” a bold move but not quite an unexpected one, especially for Burton, who had already played (sort of) gay in “Becket” five years before.

Taking place in London but filmed in Paris, “Staircase” tells the story of two men in a co-dependent, mostly unhappy relationship. The film opened to semi-decent reviews – although, in 1972, Rex Harrison told reporter Rex Reed that he considered the film “a disaster.”

Life magazine’s Brad Darrach marketed the film as “Rex and Dick in a Sick Gay Flick,” while other critics cattily commented that Harrison and Burton acted like several of their ex-wives. The response, from most viewers, was moot, and although the representation of gay life in “Staircase” was much more forgiving than previous mainstream “gay life” films like 1951’s “Detective Story” or 1961’s “The Children’s Hour” (both of which end with the gay character dying,) no one, gay or straight, was particularly thrilled by its portrayal.

Charles Dyer’s stage play, from which the movie was based, had opened to raves in 1966 in London. This was not the case with the Broadway production, which opened at the Biltmore in 1968 and closed after 61 performances. Although the appeal of “Staircase” hadn’t quite translated for an American audience, the film rights were quickly optioned off with Donen taking the lead and Dyer writing an expanded version of the stage production for the screenplay.

Stanley Donen offered Burton the part of the meek, put-upon lover Harry Leeds quite bluntly, saying: “You must think me stark raving mad, but I want you to play a homosexual.” To hammer home this (at the time) indecent proposal, certain ads disbelievingly proclaimed: “Richard Burton and Rex Harrison play what?”

The usual legacy actor trouble brewed on the set, with reports of Burton drinking and forgetting his lines – with his wife Elizabeth Taylor also in Paris at the time filming “The Only Game in Town,” Burton was understandably distracted. Harrison responded in kind, by walking offset several times. After shooting wrapped, the studio was desperate to find a way of marketing their very expensive and risky film with a gay theme. They landed on a number of taglines, the bluntest of which marketed “Staircase” simply as “a sad gay story.”