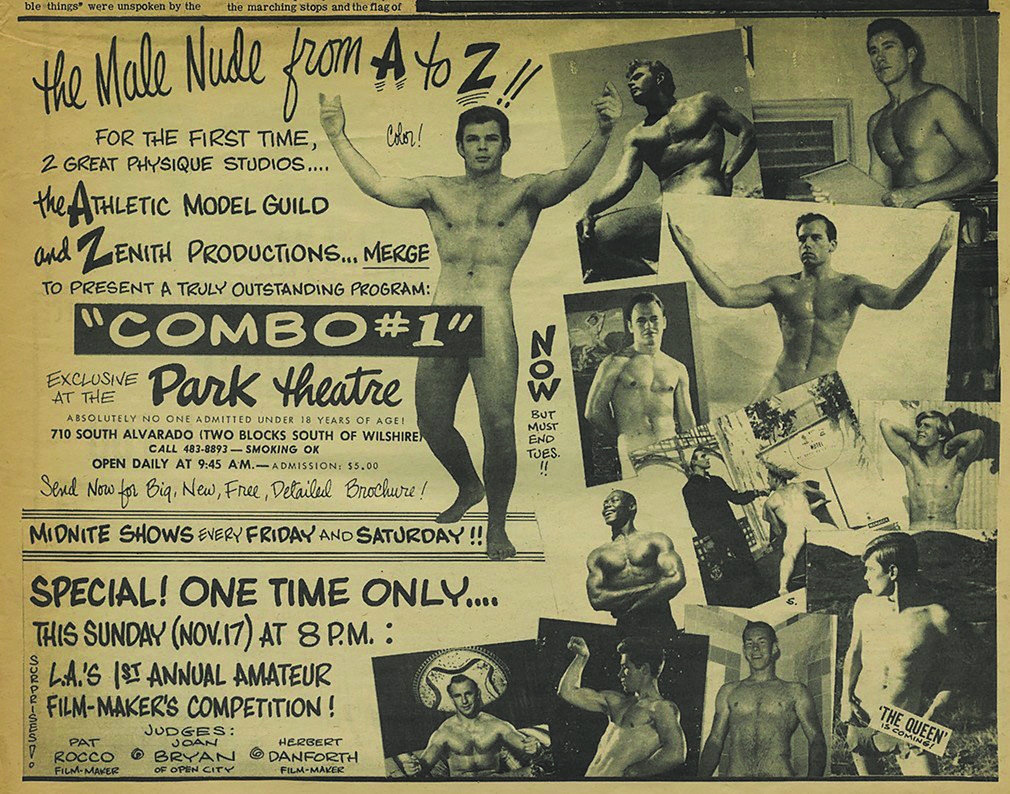 BY J.J. ENGLENDER| Activist and filmmaker Pat Rocco produced gay erotica in the 1960s. His work was widely embraced by the gay community and received favorable reviews from the mainstream press. Rocco got his start as a physique photographer of male nudes. During these photography shoots, Rocco brought his camera to film the sessions. Armed with a sizeable collection of these short films, Rocco sold the prints via mail order.

In L.A.’s Westlake neighborhood, The Park Theater was one of the first venues to program gay film. The theater was owned by Shan Sayles and Monroe Beehler.

The two owners discovered Rocco while looking for filmmakers to provide content for their series at the Park, and asked to see his work. According to Anthony Slide’s 2000 book “Nitrate Won’t Wait: A History of Film Preservation in the United States”, “The Original Pat Rocco Male Film Festival” at the Park Theatre in July 1968 was the first program of all-gay films to play in America.

One of the dominant studios at the time was Athletic Model Guild (AMG) – a physique photography studio started by photographer Bob Mizer in 1945. Mizer gained ground with the pocket-sized, mass-distributed quarterly publication “Physique Pictorial,” essentially an adult magazine masquerading as a bodybuilding magazine. The pictorials were packed with amateur models: “rough-looking, muscular men” according to Mizer. Many of the male models were considered the “human debris of the movie industry” since they were unable to find work in Hollywood.

For a while, Mizner got around strict mail-order guidelines on nudity with innovative ways to cover up the models’ dangly bits. The magazine was a success, selling up to 40,000 copies per issue.

By the late 1950s, the business had turned toward mail-order cinema. With time, Mizer’s output went full-frontal. But the studio was in decline by the 1980s, hurt by the demand for hardcore content which made its way into theaters and the advent of the VCR.