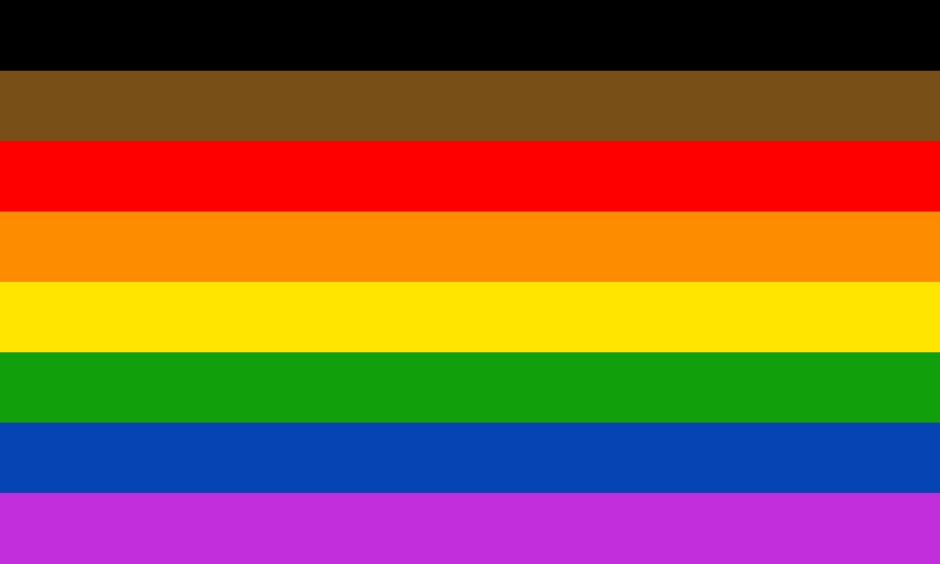 By ANNETTE SEMERDJIAN| For this year’s Philadelphia Pride, a new design of the classic Gilbert Baker rainbow flag was unfurled, expanding the rainbow to include the colors black and brown. The inclusion was symbolic, and was meant as a nod to the struggles of people of color within and without the queer community. In such a violent year as 2017 has already been, the new pride flag was meant to be an acknowledgment and a reminder: The fight for equality is far from over.

As you can imagine, it didn’t take long for the backlash to hit from all four corners of the Internet.

“It appears to be a ploy to get attention,” said one commenter on a Refinery29 article, “rather than an attempt to do the hard work required to fix a serious problem.”

“None of the other flags redesigns the rainbow flag,” wrote another. “That’s the whole problem here. Hikes decided she didn’t like the original and designed a new one to replace the existing one. I’d welcome a POC flag if it had been done like the trans, bi, and others – as a variation on the original, not a redesign and replacement.”

But here’s the problem.

The LGBT pride flag is a symbol of embracing our queerness and accepting ourselves and other community members. The recent backlash over the addition of black and brown stripes exemplifies the very reason we need them added.

When queer people of color add colors to a flag that is already supposed to represent the entire community, why wouldn’t it be upheld just as proudly?

The argument for preserving the original flag is that the colors are not indicative of race or ethnicity, so the addition doesn’t make sense to some people. However, there are already POC versions of many pride flags in existence, such as the POC version of the trans pride flag. POC are constantly having to add themselves into even the underrepresented communities that fall across the LGBTQ spectrum, making intersectionality seem like an afterthought.

It’s not about being politically correct  (if it was, the new flag would include a lot more than just black and brown stripes) it’s about the fact that in a time of increased hate-slinging and police violence toward people of color, the one community that prides itself on love, acceptance, and progress should be embracing the change. Not only was that not done, but people had qualms with the situation and began to spout preservationist rhetoric to the likes of Republicans who have become the vanguard for racist America. To face both microaggressions and blatant racism in a community that defies gender roles is telling of the subtle kind of segregation that has seeped into a culture rooted in the community of queer people of color.

Non-POC are always the default in media and re-tellings of history. Transwomen of color like Marsha P. Johnson have been the heroes of LGBT history, and it’s time to bring that forgotten history back and make it the symbol of Pride.  Although the community has taken baby steps to accepting trans and genderqueer identities, it now has to understand that intersectionality can no longer be an afterthought.