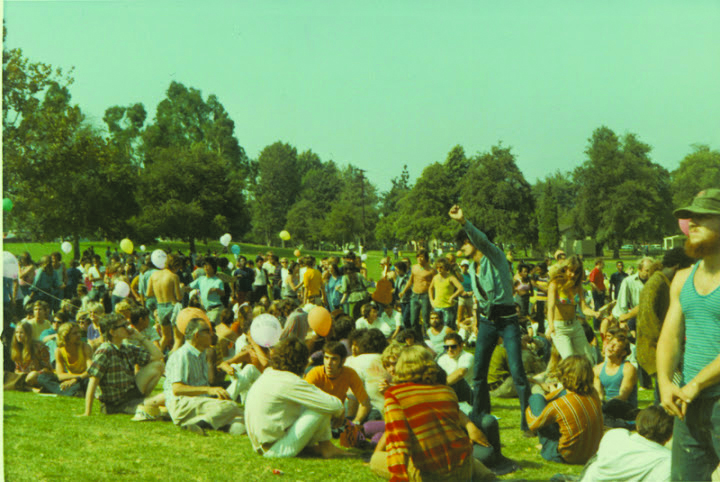 From its 1896 founding by a man named Griffith J. Griffith (yup) to its lesser-known use as Japanese-American internment camps during World War Two to the present day, Griffith Park has had a fascinating, troubling secret history.

Oh, and did we mention it’s extremely gay?

In the days before Stonewall, the park was one of L.A.’s most notorious spots for men to go and cruise for sex after dark. It took John Rechy to put Griffith Park on the cultural map as a cruising hotspot after his 1967 novel “Numbers” detailed a chance encounter at the famous sprawling enclave between Los Feliz and the Santa Monica Mountains.

Rechy would revisit Griffith Park in his work, in “This Day’s Death” (1969) and “The Sexual Outlaw” (1977), as a site of danger and desire. Like his “Day’s Death” character Jim Girard, Rechy had been arrested in Griffith Park and faced a five-year prison sentence for soliciting sex, as he told the Los Angeles Review of Books. “The vice cops, the court, the lawyers, the judge, the unbelievable moving of the trial into the sex arena of Griffith Park so that the judge could ‘see for himself,’” all actually took place for Rechy in the days when Griffith Park was a site of anonymous sex, accompanied by the threat of a criminal charge.

“Sex offenders may be brought in for questioning by the police at any time in connection with real sex crimes,” Rechy wrote in “The Sexual Outlaw,” “no matter how remote in nature to the basis of the original arrest. Indiscriminately wrecked lives. Lost jobs, broken families. Constant fear, rage.”

Perhaps this is why the park was chosen as the site of a 1968 Gay In, a bold move toward acceptance and living life in the open.

On Memorial Day of 1968, men and women gathered at the Griffith Park Merry-Go-Round to hear Mike Hannon, a policeman turned lawyer and Civil Rights activist, speak to the challenges of being gay in a homophobic society. We don’t have too much left to remember the day, but we know that it enshrined Griffith Park in the public gay memory as a revolutionary place. Somewhere where gay stories could be told – eventually – out in the open.

L.A.-based artist Tim Youd began a project last year that involved retyping John Rechy’s “Numbers” on display in the park. He began by showing up daily to the Fern Dell Drive entrance to Griffith Park, explaining to the L.A. Times that: “That’s the entrance that led to the area where a lot of the cruising went on,” says Youd. “And some people say that it even goes on today.”

We’ll call it a safe bet.