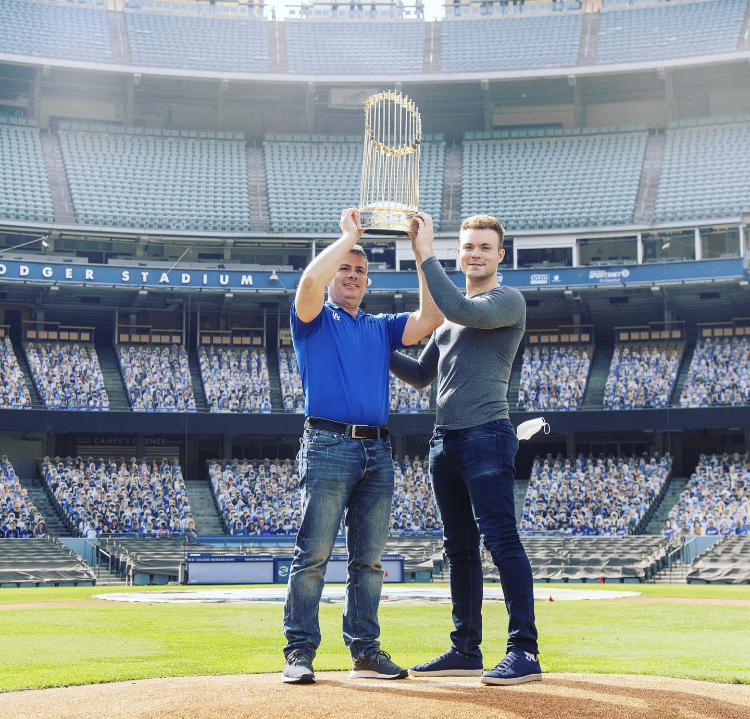 Eric Braverman and Jonathan Cottrell will exchange vows at Dodger Stadium. Showing the progress the LA Dodgers have made as a company in regards to the LGBTQ community.

Braverman, a Dodgers senior vice president, and Cottrell, a software engineer, are tying the knot on Jan. 21.

“Hopefully this will show that in a sport like baseball, even if you don’t feel you fit in, you can always find a place,” said Braverman, senior vice president of marketing, communications and broadcasting.

“Dodger Stadium is a place I called home for 15 years, a place I publicly came out, a place where I witnessed some amazing games, but a place I’ve never been able to utilize for myself,” said Braverman.

The vows will be made on the pitcher’s mound. Their names will be emblazoned on the videoboards. The guests will be seated on the field around them. The reception will be in the bar in the left-field pavilion. Some music will be played by organist Dieter Ruehle.

Guests will receive a bobblehead of the two grooms holding hands similar to the giveaways they give to fans sporadically through the baseball season and of course Dodger Dogs will be served.

Braverman and Cottrell’s union is much more than just a “gay wedding”. It symbolizes the mending of the Dodgers relationship with the LGBTQ community which has been fractured for quite some time.

“There were things that happened in the history of the Dodgers, and we wanted to make sure the LGBTQ community knew we embraced them, and embraced all communities,” said Rosen. “I mean, these are our fans.”

It’s no secret that members of the LGBTQ community in professional sports have had struggles in their careers after coming out.

This is also the organization that once ejected Danielle Goldey and Meredith Kott from a game in 2000 because they were kissing in the stands. They later apologized and donated 5,000 tickets to gay rights groups.

In recent years things have changed with the Dodgers and their views regarding the LGBTQ community.

Pride Night at Dodgers Stadium started in 2013 celebrating the LGBTQ+ community and had become one of the biggest annual affairs at Dodger Stadium.

Their commitment to the community was strengthened in 2015 when Braverman became one of sport’s highest-ranking officials to publicly come out as gay.

Two of the Dodgers co-owners are Billie Jean King and Ilana Kloss, who are married. They also embrace co-owner Magic Johnson’s son EJ, a television personality who has come out as gay.

Braverman and Cottrell met in Mexico three years ago and can’t wait to tie the knot in a ceremony that will end with the sounds of “I Love L.A.”