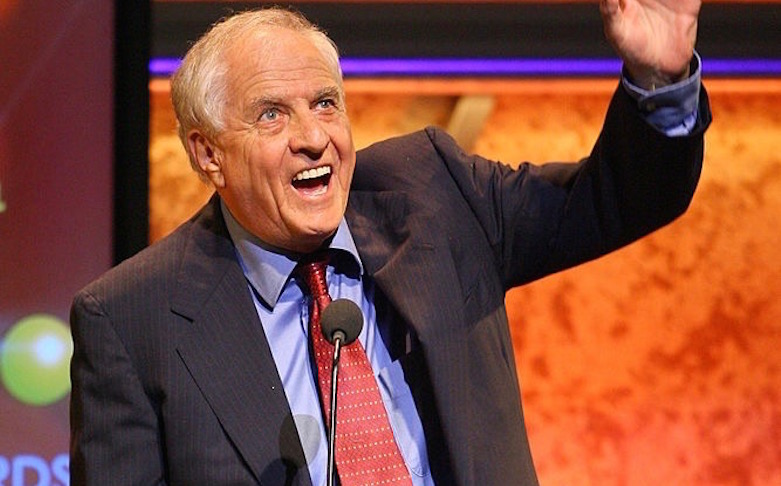 BY KAREN OCAMB  |  Tributes are pouring in from the stars he helped create such as Henry Winkler (“Happy Days”) and Julia Roberts (“Pretty Woman”) after hearing that beloved director, sometimes actor and extraordinary LGBT ally Garry Marshall died Tuesday night at a Burbank hospital from complications of pneumonia following a stroke. He was 81.

“The loss today of Garry Marshall is deeply sad – for our industry, and for our Guild. Garry’s gift for storytelling brought joy, laughter and an enormous, beating heart to every screen, large and small. When describing the type of stories he chose to tell, Garry once said: ‘I try to find scripts of stories that kinda celebrate the human condition… let’s talk about the tough world out there and the human spirit overcoming adversity.’ And that indefatigable optimism came through in everything he touched.

“As the architect of some of the longest-running situation comedies in television history –  from The Lucy Show and The Dick Van Dyke Show, to Happy Days and Laverne & Shirley, to Mork & Mindy and The Odd Couple –  he’s left an unforgettable mark on the medium, a blueprint that many have tried to replicate throughout the decades. That mark continued at the movies with Pretty Woman, Beaches, The Princess Diaries and New Year’s Eve to name just a few of his many, many hits. The winner of too many industry awards to count, his legacy lingers in the echoing laughter in so many living rooms and theaters.

“But the vision, joy and camaraderie Garry brought to life didn’t stop behind the camera. He channeled his love for the craft of directing into serving our Guild – dedicating himself to protecting the creative rights of directors, as well as teaching newer generations of directors how hard-fought the DGA’s journey has been, and the importance of carrying it forward. All the while, he kept us all smiling – no mean feat. It was an honor, and a delight, for all of us who had the pleasure of serving alongside of him.

What may escape notice as friends recount his remarkable career is how much Marshall cared about and showed up for the LGBT community. The famous director was front-and-center at almost every GLAAD/LA Awards gala, starting with the first awards show in Los Angeles in 1991. It was a time when stars and Hollywood royalty would attend AIDS benefits – but gay rights was another matter. That first LA event, produced by Jehan Agrama and Rich Jennings and emceed by ally icon Judith Light – was particularly significant for creating the Stephen F. Kolzak Award, accepted by Kolzak’s partner, “Borrowed Time” author Paul Monette.  In 1992, producer/director Marshall was up for Outstanding Film – Wide Release for “Frankie and Johnny,” starring Al Pacino and Michelle Pfeiffer with screenplay written by Terrence McNally. The film was pitted against “Fried Green Tomatoes,” with director Jon Avnet and producer Norman Lear, which won.

As a presenter, Marshall mixed criticism of anti-LGBT current events with humor.

Here’s an excerpt from the 2002 GLAAD Awards in LA, commenting on Rosie O’Donnell’s coming out  (Marshall directed O’Donnell in 1994’s “Exit to Eden”) and Florida’s anti-gay adoption law:

“Oh, man what a load of crap that is, huh? And George and Jeb Bush supporting that? What a bunch a’…. These guys are gonna tell us who should and should not adopt a kid?  Can we take a minute to talk about their parenting skills this past year?!  They can’t even keep their own daughters out of jail.  Adopt a kid?  I’d be a little scared to let those two schmucks adopt a highway.

“But Rosie’s right. The way to change people’s mind is not to chastise, but rather let them get to know someone who’s gay.  The only problem is most gay people are still in the closet … so your average Heterosexual doesn’t know who is and who isn’t gay.  They aren’t like me … See, you may have noticed, I am NOT your average heterosexual.

In fact, I’m what they call … Hetero-savant.  Which basically means I like show tunes, shopping at Neiman Marcus, and think Moulin Rouge should have won Best Picture.  But also … I have an extremely sensitive gaydar.  Yes, very sensitive, hypersensitive … it’s actually Doppler Gaydar.  Watch … (points into the audience, says quickly) Gay … gay … lesbian … gay-but-slips-when-he’s-drunk, gay, transgender – Oh …(as if he made a mistake) …  It’s a compliment madam trust me, bi, gay, bi-bi [said as “bye-bye”]– no, I’m not leaving — gay, transgender, gay, says-he’s-straight-except-for-that-one-Summer-on-the-Kibbutz….gay, lesbian, bi, gay.  Was I right? Of course I was.

“The problem is other straight Americans who live in more rural parts of the country don’t have any gaydar at all ….  I’m not sure but it might be related to Sprint’s digital network.   There’s roaming charges or something … I don’t know.

So my point is … most straight Americans don’t know that their postal worker, or waitress, or weatherman is gay. That’s why we need to see fair and accurate images of gay and lesbian people on TV and in movies and in their magazines.  They need to see that gay and lesbian people not only exist, but also struggle, and work, and get frustrated, and laugh and hate-their-cell-phone company, and are trying to be happy just like we all do.

And here are remarks after winning for “Raising Helen” and before introducing GLAAD President Joan Garry in 2004:

“Oh my God I can’t believe it’s been 15 years … and I have the same haircut.  15 years.  It seems like only yesterday that gay and lesbian people were relegated to the roles of flaming hairdressers and lesbian serial killers.  Well progress, not perfection.

“It’s a bizarre time we live in.   Martha Stewart found guilty.  Arnold Schwarzenegger elected Governor, and one of the biggest movies of the year is the ‘Passion of the Christ.’  A guilty style queen, an egomaniacal muscle man, and the King of the Jews … Could be any night at David Geffen’s house.

“They say if Gays get married it’ll somehow diminish the integrity of marriage.  I thought that’s what Hollywood was for?

“But let me get back to why we’re here tonight.  GLAAD has had great success, huge success over the years.   It’s amazing how much we’ve grown from this little piddly-squat event where celebrities wore dark glasses when they entered – okay, that was Stevie Wonder … but still.

“No, we didn’t have the big whigs that are here tonight, 15 years ago.  But as the gift bags got bigger, so did the celebrities.  And we made progress. But the fight isn’t over.   Sure there are more gay and lesbian characters on television –  but Will [from ‘Will & Grace’] still hasn’t had a relationship with anyone but Grace. Ignoring SHOWTIME and ESPN – where have all the lesbians gone?   As the opportunity for civil rights for gay and lesbian people takes center stage, we need GLAAD more than ever.”

Cloris Leachman, Oscar and Emmy winning actress, has died at the age of 94 from natural causes at her home...

The deaths of Timothy Dean and Gemmel Moore incite calls for justice within community.  By Jorge Paniagua When one of...

As the West Hollywood night scene mourns the loss of long-time bartender Charles Kinsley, the Mother Lode will be holding...

Joining with over 100 cities around the world, The LGBTQ Center of Long Beach will be hosting an International Transgender...

The transgender community is still one of the most targeted minorities in the United States. Not only are gender-nonconforming individuals...

When Nino Fortson Died, So Did His Name

Another trans life lost, and misinterpreted in death.

The late Stephen Hawking was a supporter of LGBTQ+ rights.

Drag Innovator Flawless Sabrina Bows Out of This Life

Adieu to the godmother of drag