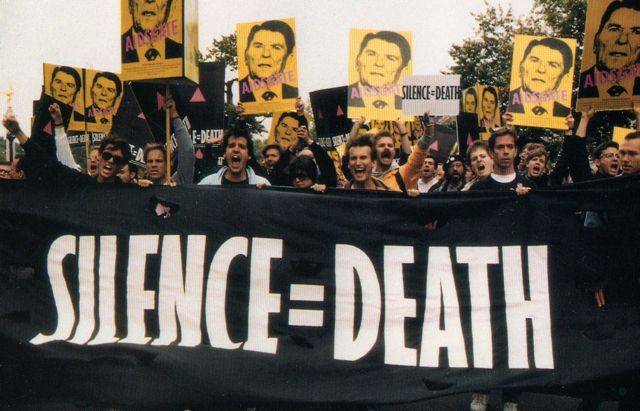 BY TROY MASTERS  |  UPDATE:  Since publishing this item, Hillary Clinton has issued a second apology.

Hillary Clinton stepped in it.

As I write this I find myself paralyzed and puzzled and not in a very forgiving mood.

“The other point to make, too, is it may be hard for your viewers to remember how difficult it was for people to talk about HIV/AIDS back in the 1980s,” Clinton said. “And because of both President and Mrs. Reagan, in particular Mrs. Reagan, we started a national conversation, when before nobody would talk about it.” Clinton said in an MSNBC interview about Nancy Reagan.  Clinton described Reagan’s role as “very effective low-key advocacy” and “something that I really appreciated.”

What is happening on planet Hillary?  Did she really need this after taking a beating in Michigan and blowing a hugely important debate?

For the record, I am not a Bernie acolyte.  I’ve supported Hillary since her first foray into elected office.  I stood with her in 1992 as she answered a then difficult question on gay marriage with incredible prescience and insight.  I’ve watched her evolve (too slowly on that question but she did).  That, in part, is why I am so aghast that she’d give Ronald or Nancy Reagan props of any kind when it comes to the AIDS crisis.

How could the smartest woman in the room invent such a ridiculous narrative?

Ok, I get it.  We all misspeak and Hillary is human.  But this week in LGBT news (and elsewhere) 1980s AIDS politics was top of mind. Who was the handler in Simi Valley giving her talking points?  Donald Trump?

Ronald and Nancy Reagan ignored years of pleas from her Hollywood friends, in particular Rock Hudson, begging her to speak out.  By the time Hudson died, many thousands of other people had died and the Reagan White House had managed to erupt into laughter each of the dozens of times they were asked about AIDS by reporters.

Nancy was silent…or at least she was just saying “No.”

We died and they laughed.  Nancy did not lift a finger.

President Reagan willfully ignored a growing public health crisis. The president didn’t want to help “queers” because “they deserved it.”

Some have said Nancy eventually pushed her husband on the issue, but we’re really mostly talking about Ron Reagan.

Here’s the reality of the environment in the Reagan White House.  Press Secretary Larry Speakes:

Q: Larry, does the President have any reaction to the announcement—the Centers for Disease Control in Atlanta, that AIDS is now an epidemic and have over 600 cases?

Q: Over a third of them have died. It’s known as “gay plague.” (Laughter.) No, it is. I mean it’s a pretty serious thing that one in every three people that get this have died. And I wondered if the President is aware of it?

Q: Well, I just wondered, does the President—

MR. SPEAKES: How do you know? (Laughter.)

Q: In other words, the White House looks on this as a great joke?

MR. SPEAKES: No, I don’t know anything about it, Lester.

For those of us who spent years bouncing around the hospital bedsides of dying friends, comforting loved ones as they passed, helping some of them pass more gently, fighting to contain rage while we changed the world and forced it to listen and act, Clinton’s words are salt in an open wound.

Hillary issued a not very thoughtful apology saying only that she misspoke.  She seemed to have a senior moment and implied she confused Alzheimer disease with AIDS.

Pardon me while I wretch.  I don’t think overstatement is possible here.

Prepare for a deluge, Madame Secretary.  I find myself caring about your damned emails.