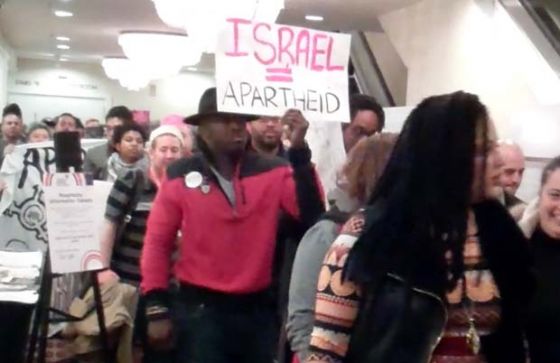 BY CINDY RIZZO  |  You may have read the news reports about the protest of a reception at this year’s Creating Change conference in Chicago. Maybe you were there? Maybe a friend called you from the conference relaying a breathless account?

There’s no point in me recounting the events or even my own experience that evening on the third floor of the Chicago Hilton. Read the coverage here or the very thoughtful statement of Jewish Queer Youth. Read the post-conference statement by the National LGBTQ Task Force.

What’s most important now in the aftermath of these events is reflection, for all concerned. What can we learn from these troubling events? What is the work we need to do to ensure that they won’t be repeated?

Here are my thoughts.

Lessons for A Wider Bridge, the Reception Hosts

· Gain a better understanding of the environment before you schedule an event at an activist conference filled with people who have passionate left-of-center views. Talk to people who’ve been to Creating Change, including the Jewish Working Group, led by amazing anti-racist, progressive Jews. Understand that Arab and Moslem queers might be attending and anticipate how they might view this event. They have a valid cultural narrative and you need to do a better job of engaging with it and with them in advance. They should not automatically be assumed to be anti-Semitic.

· Keep folks safe. If there is any hint that your event might be controversial, do not move forward unless you are assured that your participants and attendees can be safe.

· Be more mindful of the needs of JOH. Do not involve the leaders of the Jerusalem Open House in an event where controversy can be anticipated. These are young people who recently held a Pride march where a violent, Jewish fundamentalist murdered a 16-year old girl and wounded several others. JOH folks had no business being asked to put themselves in the middle of something so volatile when they have still not gotten over the horrible events of last summer.

· Do a better job of explaining who you are and what you stand for and allow JOH to do the same. Much has been written about whether A Wider Bridge supports the occupation, the current Israeli government, and the efforts to promote Israel’s reputation by touting its record on LGBT rights (known as “pinkwashing”). Most Americans, including most LGBT folks, know very little about issues outside of our country. They rely on what they are told and what might be on a group’s website. If A Wider Bridge wants to be present at Creating Change, it needs to introduce itself and not let people with inaccurate information control its narrative.

· Learn the historical antecedents of your tactics and make sure your protesters understand them. Anticipate how it will feel to a group of Jews to have a loud and large mob descend on their event, trying to get in the door and pushing at the room dividers from the other side. Many of us go right back in our minds to Germany in the 1930s. Yes, I’m sorry, the Holocaust is very real for us, especially when we are placed in this kind of a fearful context (and, no, I’m not calling you Nazis and I disagree with anyone who would).

· Don’t conflate organizations. A Wider Bridge and JOH are two different organizations. JOH is a progressive group operating in a city whose inhabitants are hostile to its existence. Many Arab and Palestinian youth rely on JOH. In fact the Palestinian LGBT organization in Israel began as a program of JOH. These people are not the enemy. It’s likely they share many of the same values and politics as you. Learn who they are and understand also that they were brought to the US only months after they experienced a horrific violent attack. You shouldn’t retrigger their PTSD.

· Understand what you are chanting and instruct protesters that anti-Semitism will not be tolerated. The chant “Palestine will be free from the river to the sea” is a call for the erasure of Israel. That is how most people interpret it. If you mean something else when you use it then you’d better have flyers explaining it. Otherwise the conventionally accepted meaning holds.

· The right wing Israeli government of Netanyahu, the Israeli people, and the Jewish people should not be confused or treated as one. To do otherwise, creates an environment where anti-Semitism can raise its ugly head. Don’t let that happen.

Lessons for the Task Force

· Talk to all sides, plan accordingly and make sure everyone can be safe. There’s a big difference between groups taking over the stage at a plenary and what happened in Chicago. The protest leaders needed your guidance and direction before the conference or at least on the first day. The location of the reception (and thus the protest) on a hotel floor with a long, narrow hallway was a major error. There were safer locations where some of the drama that unfolded at the door and the allegations of who pushed who could have been avoided.

· Understand how the misguided location of the event led to an avalanche of terrible outcomes, including the hotel calling the police, which put the young POC protesters and the undocumented protesters at grave risk. I know the Task Force understands this, but you need to prevent it from happening again.

· Train peacekeepers, people who can hold the line without violence or intimidation and prevent the escalation where the police have to be called.

· Review your actions. I know you’re doing this already. But really do it. Don’t just sit in a room with yourselves. Ask independent investigators to seek out information from those involved. Assess the findings and learn, learn, learn. Then be transparent about your process, your learnings and your plans for 2017.

A Lesson for Us All

· We are not each other’s enemies. I know this is difficult to believe sometimes. But horizontal hostility directed at one another, including the Task Force, serves no purpose. Rea Carey, Russell Roybal, Sue Hyde, Stacy Long Simmons and all their colleagues are good people who strive at all times to do the right thing. But like the rest of us, they sometimes miss the mark. Who among us can say we never do?

At the very end of the conference I attended the annual feedback session held by the conference managers. One of the people who spoke was a young man I know, a former work colleague who I even supervised for a short period of time. As an Arab-American gay man, I knew he was involved in organizing other Arab queers and I wasn’t surprised to learn that he was one of the leaders of the anti-pinkwashing protest.

I hadn’t run across him at the conference until that very last session. When he spoke to give his feedback, he was critical in all the ways I expected. He disagreed with the decision to hold the reception and was angry about how the events of the night unfolded. But it was the catch in his voice, not his words, that moved me. He was literally on the verge of tears. These events had caused him great pain.

As I left the session, I walked up to him and we hugged warmly. I kissed his cheek. It was in that moment that I was reminded of the most basic thing that perhaps I had forgotten; the lesson I’d needed to learn. He and I likely don’t agree on the politics or the tactics. We likely have very different accounts of what happened that night at Creating Change. But what we do agree on is our common humanity and our affection for one another. In short, we believe in each other.

I walked away from him filled with love and with immense respect for his passion and his commitment. Maybe that’s the real bridge we all need to build.