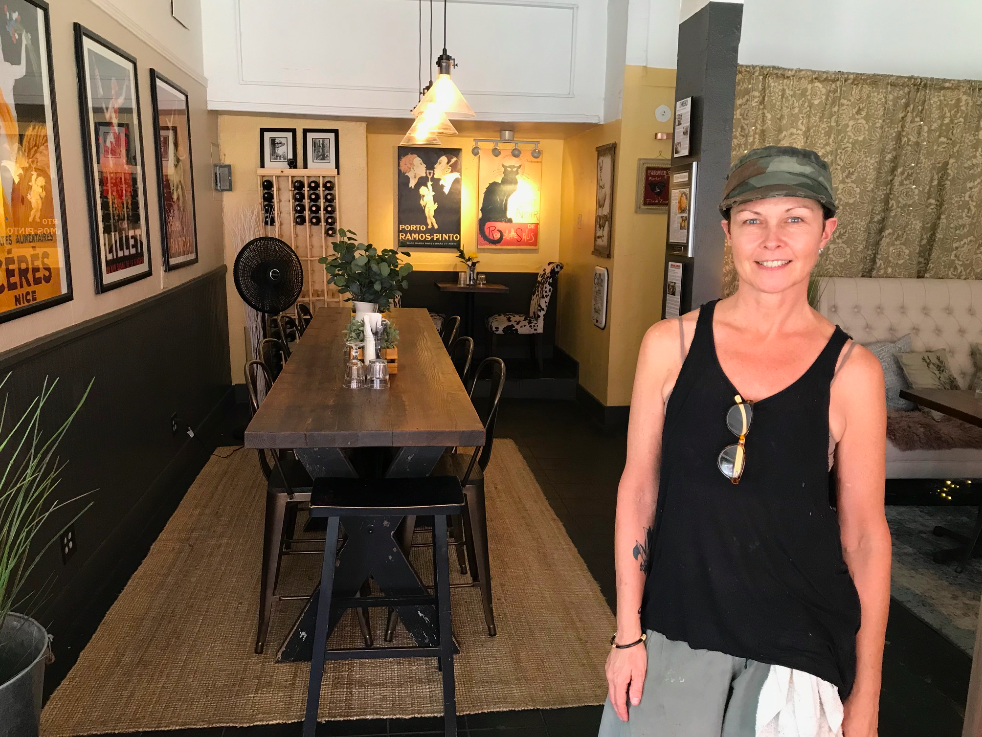 Yet, the restaurant is ready for a second opportunity — a redemption of sorts — from its neighboring community.

The restaurant, owned and operated by Kim Sanchez, sits in an old-fashioned building on the corner of 3rd and Elm street in Long Beach’s Art District. The ambient in the restaurant’s surrounding neighborhood is calm and collect — an ideal fit for a diner that aims to provide a comfortable experience for its clientele.

Sweet Dixie Kitchen is an LGBTQ+-owned and LGBTQ+-friendly restaurant providing a safe place for the city’s many community members. The LGBTQ-pride flag normally flies right outside of the restaurant’s doors but it keeps being stolen, according to Sanchez.

Sanchez, who openly identifies as a lesbian woman, enjoys remaining an active member of her community. For instance, Sweet Dixie Kitchen has been a part of the Long Beach Gay & Lesbian Chamber of Commerce for the past four years. The chamber serves as a networking and support organization which aims to connect gay-friendly and gay-owned businesses in Long Beach.

Moreover, Sanchez and her partner, Victoria Person, are proud to be LGBTQ+ people. Person is a board-member of the Los Angeles Gay & Lesbian Chamber of Commerce.
The couple enjoy participating in events provided by the Los Angeles LGBTQ+ Center. Both were executive producers at this year’s OUTFest, an LA-based film festival showcasting LGBTQ-interest films.

Since last October’s scandal, the restaurant has focused on providing community-outreach within the city. For example, Sanchez tries her best to support the Long Beach’s LGBTQ+ Center by donating pastries and gift certificates whenever she is able to.

“I’ve been in touch with Porter at The Center — if they ever need anything,” Sanchez said. “We would give them the restaurant space for free, if they need it for meeting space. It’s open and available to them. I’ll donate to whatever they’re doing.”

The restaurant has also donated, either monetarily or with complimentary food, to the Long Beach Library Foundation, Pathways to Independence, Special Olympics fundraiser and other causes, Sanchez said.

The restaurant was at the center of a peculiar scandal — one Sanchez coins as “PopeyesGate.” It turns out that the menu included two seasonal items – one of which was a chicken and waffles dish, featuring Popeye’s fried chicken rather than a freshly-fried option.

As reported by Tim Grobaty for the Press Telegram in October 2017, the restaurant was “facing a digital firestorm ever since a Yelp user posted that the fried chicken they’re serving actually comes from the fast food chain Popeyes.”

As a result of the competition brought about by neighboring restaurants in the community, Sanchez said that she wanted to add a limited-time menu item that would prove to be a hit with customers while staying true to the restaurant’s overall Southern theme.

Fried chicken and waffles seemed like the perfect fit, Sanchez said. Yet, as a result of her restaraunt being in a historic Long Beach building, one routinely policed by health inspectors, she was unable to add a deep fryer to her kitchen.

“I’ve got a very small kitchen that’s pretty old, back there,” Sanchez said. “So, we don’t have a lot of equipment and we can’t put a fryer in because we don’t have the proper grease-trapping things for it. We would have to do a whole demolition of the kitchen and, kind of, start over if we wanted to fry our own food.”

According to the Long Beach Water Department’s website, fats, oils and greases (FOG) are serious problems for the city’s public sewer system. Large amounts of these greases, as reported by the department, are “illegally washed into sewers mainly from food preparation establishments (usually through kitchen sinks and floor drains) that do not have adequate grease control measures in place.”

The owner’s intentions, entirely influenced by her drive to provide fried chicken in her Southern-themed restaurant, were rooted from a carefree, happy-go-lucky, mindset. However, the neighboring community’s reception, specifically on Yelp, was far from amused.

Yelp reviewer, Tyler H., whose review broke the news that Sanchez used Popeye’s chicken, started his October 2017 review of Sweet Dixie Kitchen with, “THE CHICKEN THEY USE IS FROM POPEYES!” and, ended his review with, “I challenge you to be honest with your customers…put it on your menu that you “proudly” serve Popeyes chicken. You do this for coffee … why not for Popeyes chicken?

Sanchez said that her use of fried fast-food chicken was never a secret. Yet, she believes that the media manipulated their coverage of the story to make it seem as though she had been exposed.

Since the scandal, the restaurant has struggled to recover financially and Sanchez’s spirit remains “fractured.”

“Popeyes was a huge stressor for me,” she said. “It sucked most of the life out of me and since I’m the driving force here it’s been hard to come back from that personally. It’s hard to, some days, come in here and try to create something. It’s really hard.”

Sanchez wants a second opportunity to show Long Beach that her restaurant is worthy of their time and hard-earned cash.

“I would really like to be given a fair opportunity, by my community,” Sanchez said. “Come back and eat — see what we’re doing. You know, if you don’t like it, you never have to come back again. But come back once just to see.”

Despite Sanchez’ community outreach, she remains divided on the defamation caused by the controversy. She, of course, regrets the choice but also remains hurt by all of the online “trolls” who harassed her on a constant basis.

Sweet Dixie Kitchen will be bringing back a special edition menu item, featuring Popeye’s fried chicken, every Friday in October. Sanchez said that she feels it is necessary to commemorate such a traumatic time in her life in this humorous way.