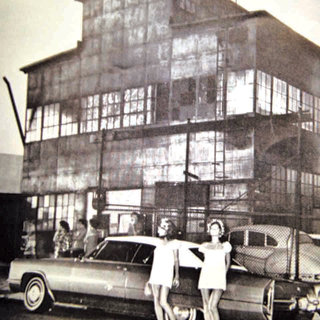 You might know the phrase The Factory as something belonging to Andy Warhol. But, once upon a time in 1974, not so mild-mannered for an optometrist Scott Forbes opened a gay club in L.A. called Studio One at The Factory. Originally built in 1929 as a space for the Mitchell Camera Corporation, the irony of the edifice eventually becoming a haven for the gay community of West Hollywood was that, by 1946, it was said that 85 percent of all movies distributed in theaters were filmed using Mitchell cameras.

Considering the gay obsession with Hollywood despite its flagrant lack of representation of anything other than the heteronormative and phony baloney, it bears noting what The Factory in its original incarnation once housed.

As an important historical landmark and institution of the West Hollywood and West Coast gay scene, Studio One would support one of the first major AIDS fundraisers of the decade for AIDS Project Los Angeles in 1984, with, incidentally, Joan Rivers being the only celebrity willing to participate in the affair. She would, naturally, receive several death threats for her involvement – but Joan was nothing if not a badass bitch unafraid of knives and mortality (so long as she still looked good when crossing to the other side). Lloyd Coleman, who worked with Forbes to form Rocket Entertainment during the Studio One era, commented, “Rivers was, up until that point, the only person who ever did anything to raise money to help fight AIDS or help people with AIDS. There were no drugs, the only thing you could do is help them, comfort them during dying. It was all they could do… raise money for hospice.”

Things have come a long way since then, and Coleman thinks that the latest iteration of The Factory would do justice to Forbes’ vision and enthusiasm for catering to the needs of the neighborhood. With the threat of The Factory coming into possession of West Hollywood-based real estate company Faring, panic spread among those who valued the integrity of the storied structure. Coleman, too, became alarmed as he joined a coalition called SAVE THE FACTORY a couple years back, only to change his mind as he further researched the company’s intentions and decided, “Faring had the same plans that I did – to preserve the history of the building and its patrons while incorporating it into their development, and to re-create a venue not only for future entertainers, but as a living museum for what it once was.

In the process, that would bring many of us who lived, breathed and worked Studio One back together again in a common cause.”

Like so many who have trouble with change, Faring has been met with more than its fair share of skepticism, but as Coleman put it, “The Factory has a real future again. Not just as a living ‘museum’ of Studio One, but as a showroom and gathering place of the future. Preservation comes in many forms. Buildings can be frozen in time to just look at. Or they can be re-purposed, even modernized.”