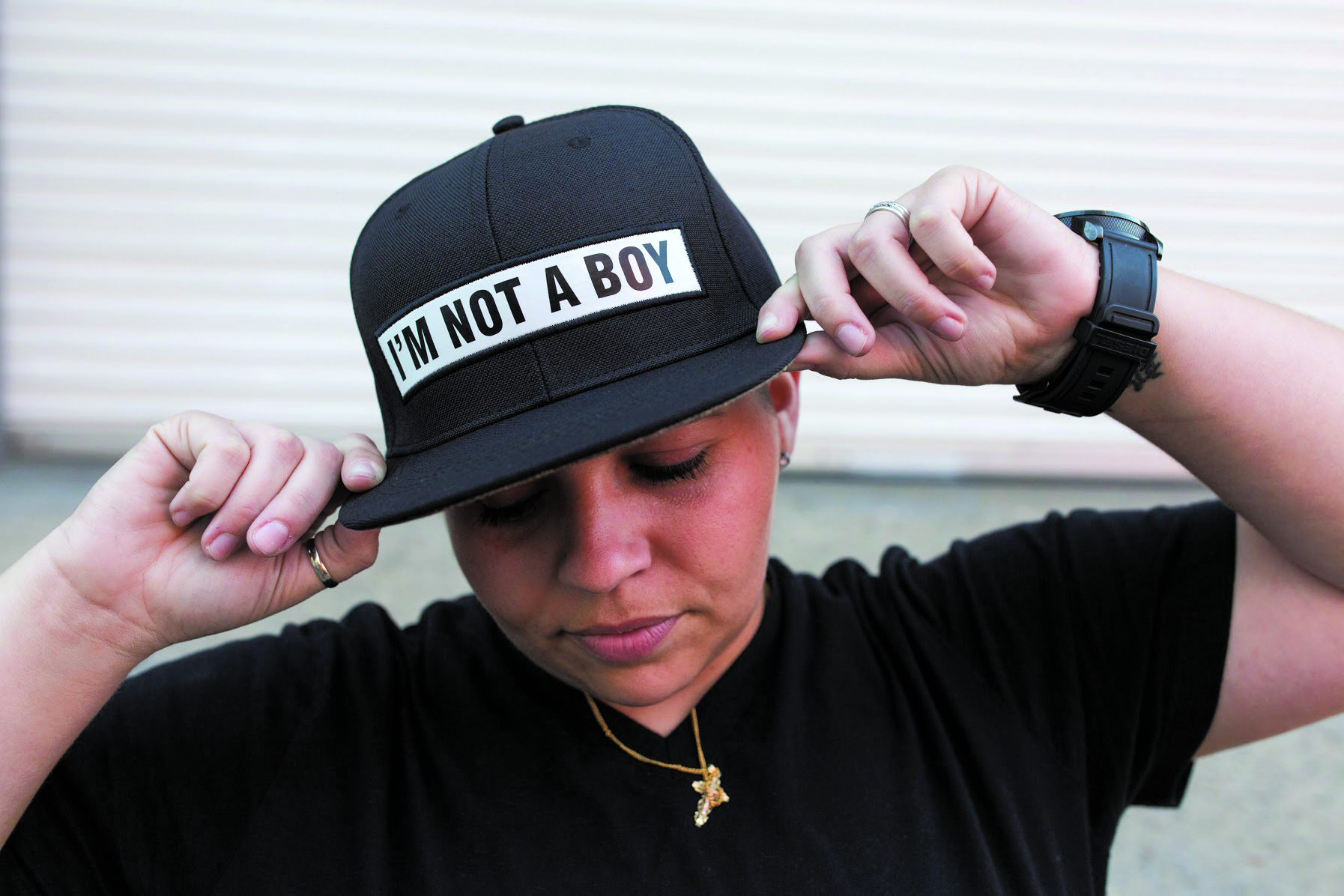 For gender nonconforming people of any stripe, the struggle to find something to wear to the beach is painfully real. The days of 1920s full-body wool swimsuits are sadly gone – they’ve been replaced with an uncomfortable, heavily-gendered model when it comes to swimwear. Even the most progressive stores don’t tend to carry bathing suits for anyone who wants to wear something other than a bikini or board shorts.

San Diego-based clothing company Dapper Boi is changing all that. Started in 2015 by CEO Vicky Pasche, Dapper Boi was conceived of as a modern, butch-focused approach to the classic jean. “We were thinking when we started, let’s do this one thing, [jeans that had a male style and a female fit] and let’s do it really well,” said Pasche. After figuring out how to design the perfect androgynous jean, Dapper Boi launched a Kickstarter for the $18,000 it would take to cover production costs.

Today, they’ve taken the crowdfunding model even further, and have started to produce new products with the same, gender-free ethos in mind. Most notably – and just in time for summer – the Dapper Boi bathing suit.

A promo video for the as-yet-unreleased bathing suit model shows a struggling butch trying to figure out what to wear to the pool. Frilly bikini top? Sports bra with stretched-out tank top and shorts? At last, the Dapper Boi solution is proposed – a snug compression top paired with shorts to provide the best amount of coverage for all those often beach-avoidant folks who, at the end of the day, just want to go swimming and not have to think about body politics.

It’s a struggle so many people can identify with, wherever they fall on the gender spectrum. For a community that’s too often ignored or underserved by clothing companies, Dapper Boi’s swimsuit is a game-changer. For Pasche, its creation came from a very personal place.

“When writing the script for that video, it really just was about my struggle every year. And I know a lot of people who go through that, too. Even just talking to my friends, they’re like ‘oh my god! Yes!’ Because I don’t have the body for just a sports bra or a bikini top, and that’s not even my style. What I normally wore to the pool is one of those under tanks that gets all faded and crunchy and gross. We took that simple concept of like, seeing a lot of people in that position at the pool and we just made it into a bathing suit. It’s a simple thing but sometimes those simple things really help.”

In a retail world where chest support is almost never a priority in swimwear, the compression top is something unique that Dapper Boi is bringing to the market. “It’s not a binder,” said Pasche. “It just keeps you snug in there so there’s not a lot of bounce.” Starting in July, the bathing suits, which Pasche is selling at wholesale for a limited time before introducing the retail price, will start shipping out. Keeping the price at wholesale, for a least a short amount of time, is important to Dapper Boi’s sustainable model. The company makes their jeans in L.A., their bathing suits in Colombia, and has plans to produce other items in ethical factories in China. Taking a tip from Everlane’s ‘radical transparency’ model, Dapper Boi keeps its buyers aware of exactly how the clothes are being made.

“It’s expensive, and we do get a lot of complaints about that. But people don’t understand what it costs to produce ethically. I didn’t understand it before I started.” Pasche said. As a small company, Pasche takes on more than most in terms of keeping products sustainable and affordable. It’s an aspect of the job that keeps her up until all hours: In fact, Pasche was so intent on completely the perfect design for the suit that she almost missed her deadline. “We were down to the wire with this one. Literally, I just approved it a couple of days before the launch – that night we were up until 5:30 in the morning signing off on designs. I wasn’t sure if it was going to happen!”

The creation of the design was a labor of love, and a perfect compliment to Dapper Boi’s style of bold, gender-questioning attire, including shirts and hats that proudly bear the slogan, “not a boy.”

When asked about the future of the company, Pasche expressed excitement about Dapper Boi’s growing market.

“I started it to be about androgynous, butch women. But we’re realized down the line that we’re getting more and more people who are saying, ‘I fit in your clothes as well.’ So that is the game plan. We had to start somewhere, and butch was a great place to start. But we want to end up being a completely genderless brand. I don’t even want to mention gender. I’d like to keep our brand as simple as possible and just welcome all.”