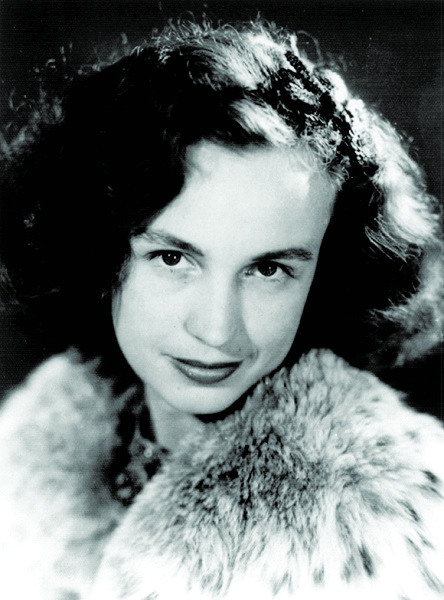 America’s first Lesbian magazine was created on the lot of RKO Studios by a very bored stenographer in 1947. The woman known as Lisa Ben (a brilliant anagram for “lesbian”) was actually the amazingly-named Edythe D. Eyde, a 25-year old secretary who’d only come out as gay a year before. “Vice Versa,” the product of long days at RKO with not enough work to do and carbon copies to spare, was a kind of proto-zine about lesbian art and culture around Los Angeles. Written entirely by Eyde and enjoying an extremely limited distribution (12 copies per issue,) “Vice Versa” was, to Eyde, a truly “homemade” effort, the product of a woman in search of a community.

In the 1940s, before second wave feminism made women’s bookstores a reality, finding high-minded content produced by and for women was a tall order. In the post-war atmosphere of the late ‘40s, women in America were experiencing an uncomfortable social transition. During the war, it had not only been acceptable to women to join the workforce, it had been encouraged, giving women both widespread financial independence and an ability to form social groups completely independent of men. For gay and straight women alike, this was a radical change from the pre-war environment of the early ‘40s, when marriage and domesticity were the only things society allowed women to aspire to.

When the war ended, things were expected to snap back to what they’d been before. For Eyde and others, this wasn’t a welcome change. As a newly-out woman in the workforce and living in Los Angeles, Eyde sensed the potential for a new community: a group of women she could speak to, for, and with. “Vice Versa” was truly a labor of love, painstakingly written and thoughtfully rendered, featuring film, theater, and book reviews each issues, with discussions of the (very few) pieces of American media dealing with lesbian and queer subject matter that were being produced at the time. For the first issue of “Vice Versa,” Eyde dedicated her magazine “to those of us who will never quite be able to adapt ourselves to the iron-bound rules of Convention.” In the space of only eight pages, Eyde covered “Vice Versa’s” place in the magazine market, the merits of a (since lost) 1937 film adaptation of Radclyffe Hall’s “The Well of Loneliness,” and a play called “College for Scandal” presented by a small LA theater group featuring a “constant undertone of possible lesbian relationships between characters.”

Of the nine issues of “Vice Versa,” this would be standard. Reviews of lesbian-adjacent entertainment took center stage, while readers were encouraged to submit their writing and criticism in order to make the magazine grow and change with the LA lesbian community. The kind of excitement “Vice Versa” created in that world was apparent from its first issue onward, as readers wrote in with suggestions to make the magazine larger and increase its readership. In the “Whatchama Column” for reader letters, one writer (named “Sympathizer”) wrote in:

“While at the present time I realize VV is for circulation in the “Uranian Underground” only, as it were, I feel the day may come when it may enjoy a wider distribution as a medium of propaganda for this lost cause. Who was it? – Gary Cooper, I believe, in “Mr. Smith Does Good Deeds” – who once said, “It is only the Lose Causes that are worth fighting for.”

“Vice Versa” would put out its final issue in 1948, after Eyde sensed its distribution had become too risky. Under the Comstock Act, the distribution of publications with explicitly gay or lesbian content was a punishable offense by law.

“Vice Versa,” of course, was not the end of the matter. When “The Ladder,” the first nationally-distributed lesbian magazine, first hit stands in 1950, Eyde was one its contributors. She kept working and writing in Southern California until her death in 2015. At that time, “Lisa Ben” was still an anonymous pen name, per Eyde’s request. It was only after her death that Eyde and Ben were revealed to be one and the same, her legacy finally revealed.