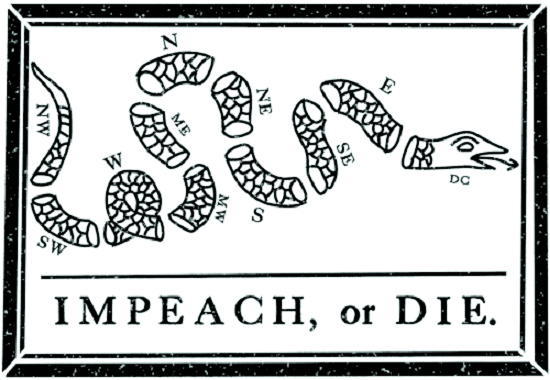 BY DOUG MONTGOMERY| With echoes of David and Goliath, the Los Angeles City Council passed a resolution calling for an investigation into possible high crimes or misdemeanors committed by Donald Trump sufficient for impeachment.

Specifically, the May 5 resolution focuses on Trump’s financial dealings and whether he has violated the Foreign Emoluments Clause of the U.S. Constitution. A virtually unknown section of the founding document prior to his election, the clause prohibits elected officials from accepting “any present, Emolument, Office, or Title, of any kind whatever, from any King, Prince, or foreign State.”

As a billionaire with a vast portfolio of international holdings, the businessman-turned-president has fielded criticism for not divesting himself of his businesses. Experts claim that as a result, Trump has received gifts and benefits from foreign leaders and states in the form of financial gain. This, critics argue, constitutes a breach of the Emoluments Clause.

“If he is not going to come clean and show the American people that his hands are clean of potentially illegal foreign money in investments, then we must demand that Congress use their power to investigate the situation,” said Councilman Bob Blumenfield, who introduced the resolution.

“With this resolution, the city of Los Angeles calls on our Congress members and senators for the good of the country to investigate Trump’s international finances, and make sure that he is actually working on behalf of the American people and not his own pocketbook.”

The resolution passed by a 10-0 vote. Councilman Mitchell Englander, the council’s solitary Republican who represents parts of the San Fernando Valley, was nowhere to be found when the votes were cast. He was in the chamber immediately before and after the vote.