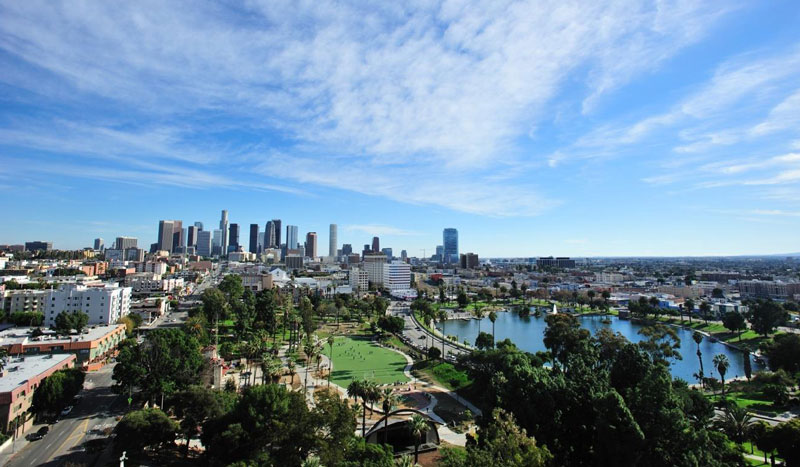 “MacArthur Park” might bring to mind the song of the same name from the 1960s (or Donna Summer’s disco remix).  Others recognize it as the focus of the nation’s largest Central American community.  And for some, it’s on the frontier of gentrification.  What’s likely forgotten is the location’s early role in the L.A. LGBT community – as the home of various organizations, and a cultural center of everyday life.

First opened in 1890 as Westlake Park (renamed in 1942), it was at the center of a new subdivision intended for the wealthy.  With its lake and landscaped surround, the Park was instantly popular.  Otis Art Institute opened in 1918 across the street in a donated mansion.  By the 1920s, the wealthy had moved on, apartment towers began to sprout, and a new cultural center was in place.  Down the block stood the Masonic Lodge, crowned with its enigmatic statues.  Just south, Chouinard Art Institute (now CalArts) opened in 1921.

Across South Alvarado Street, the Westlake Theater opened in 1926 with 1,949 seats, configured for both movies and vaudeville productions.  In 1960, it became Park Theater, and in June of 1968 (a year before Stonewall), filmmaker Pat Rocco hosted “A most unusual film festival, the first assemblage of films of interest to the adult homosexual.” Most recently, in 1991, the building was converted to house a swap meet.

For many years, the park was a popular cruising area.  In 1953,Dale Jennings broke up with co-Mattachine founder Bob Hull,and went out ‘looking.’  One night, he met a man in a park restroom, and took him home to Echo Park.  The guy was a vice officer, and this interaction was enough to have Jennings arrested. Mattachine organized to fight his conviction, and their success initiated an enormous wave of interest in the organization.

Women’s interest groups have long had a presence at the park.  The Sewing Circle mentions the Lake Shore Club, the Open Door on Alvarado, and the If Club on Vermont, which was open from the 1930s into the 1950s.  In 1973, the Woman’s Building was founded in the former Chouinard space.  Initial tenants included Sisterhood Bookstore, Womanspace, and the newsletter, Lesbian Tide.  Around the same time, the Alcoholism Center for Women, an offshoot of the Gay Community Services Center, opened nearby, on South Alvarado Street , where it remains today.

The Center opened its doors in 1971 at 1612-14 Wilshire Boulevard in a Victorian mansion (since demolished). The Gay Community Services Center was the first gay organization to receive non-profit status by the IRS, and was the first organization with the word ‘gay’ in its title to receive funding by the federal government (1975).  Staff reported that during the first year between 1,700 – 2,500 men and women passed through the doors each week.  By the end of the decade it had moved to Hollywood.

Gay life in Los Angeles been shaped by what happened in this neighborhood.  Bob Mizer established the Athletic Model Guild in 1945.  At the time, censorship laws allowed women, but not men, to appear undressed in “art photography.”  Mizer worked for 47 years photographing and filming men, during which time he was arrested on several occasions.  Over those years, both his content and media changed along with legal standards and technology.  An excerpt from Beefcake, by the Leather Archives & Museum, showcases some of his work.

Mizer worked out of late 19th and early 20th century homes on West 11th Street, east of South Alvarado Street that is today protected within a preservation area. Among his models were Steve Reeves, Jack LaLanne, Joe Dallesandro, and Arnold Schwarzenegger.  The Bob Mizer Foundation was founded in 2010 to preserve and restore his work.

The Silver Platter is a good place to end the tour. At 7th Street and South Rampart Boulevard, The Silver Platter served the local community for 50 years, starting in 1963.  The clientele changed as the neighborhood and the city changed and by the 1980s, customers were mostly latino.  By the early 2000s, it had begun to draw a transgender crowd.  And, in 2012, trans filmmaker Wu Tsang began a weekly trans event, “Wildness,” which has been commemorated in a video of the same name.