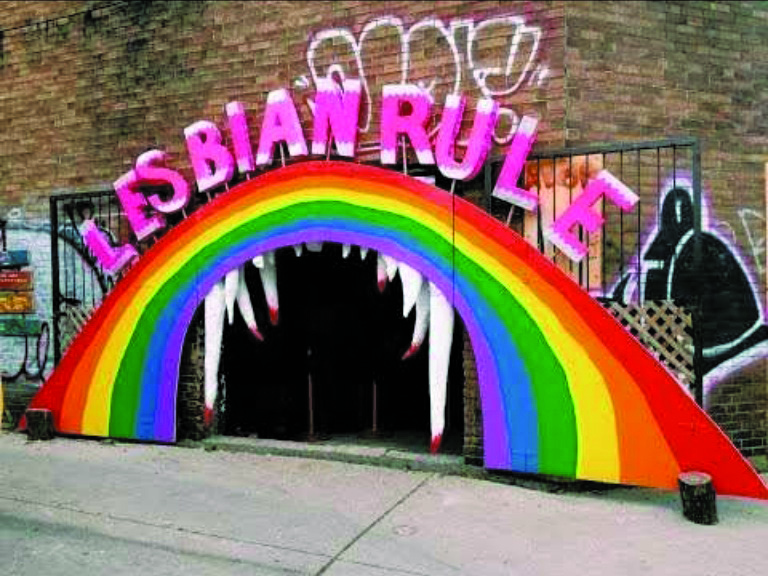 The WeHo lesbian haunted house is back, this time in book form.

Back in the day, when LGBT+ folks had to contend with illegal identities, certain aspects of the community were a lot less complicated to hash out. Who could have predicted, back in the 1950s or even the 1970s, that a community that fought together to establish basic rights and freedoms would become so divided by the new Millenium?

Today, with so many different identities living under the same LGBTQ+ umbrella, the question we find ourselves asking isn’t “how do we make change happen?” More often, it’s “how much do we all really have in common?”

The LGBTQ+ community is not, and has never been, a monolith. But even within the tiny enclave of L.A. gays, there are enough seeds of dissent sewn around to create more than our fair share of tempests in teapots. The simple labels of “butch” and “femme” have made way for more complicated associations (see: soft butch, futch, diesel dykes, bois, and sporty femmes) and as the generational gap grows, we’re seeing more and more dissidence within a community that used to find itself banning together against all odds.

Enter “Killjoy’s Kastle,” a 2015 performance art piece that came to West Hollywood’s ONE Archives in 2015. The experience–half haunted house, half immersive art piece–was a response to all the different ways in which queer women have been turned against each other over the years. From TERFs to gender-critical feminists, every type of assumption about lesbian identity was taken on, skewered, and dissected for a willing audience. Now a book of essays related to the installation, “Killjoy Kastle” takes on an even bigger variety of whipping girls (and bois) through essays. Like the original KillJoy’s Kastle: A Lesbian Feminist Haunted House, the book “is designed to pervert, not convert.”

Toronto based-artists Deirdre Logue and Allyson Mitchell advised viewers to “follow your demented women’s studies tour guide through the glorious and grisly KillJoy’s Kastle.” In essay form, all the same stereotypes, old tropes, and misguided assumptions about lesbian life come back to wreak intellectual havoc once again on readers. The response, fittingly, hasn’t been unmixed.

“Killjoy’s Kastle was the subject of debate, derision, and disgust, both inside and outside of queer communities,” writes Alexis Clements for LARB. “Within queer communities, it was criticized by some for being too white, too cisgender, too demanding for those working on it, too scary, and too focused on genitalia and essentialist ideas about genitalia and gender.”

It makes sense that a potentially polarizing book based on a potentially polarizing art piece would still wield the power to polarize, especially in the current climate. Not everyone believes that staring down stereotypes and taking on harmful tropes is part of the work we need to be doing at this moment. As such, no one can quite agree on what’s “scary” about a lesbian feminist haunted house. Is it the fact that it seems like it’s making fun of past queer pain? The fact that it’s gleefully irreverent? Or perhaps the feeling that within this over-the-top world, someone might find the exact kind of twisted queer utopia we all see in our dreams: imperfect, yet beautiful.