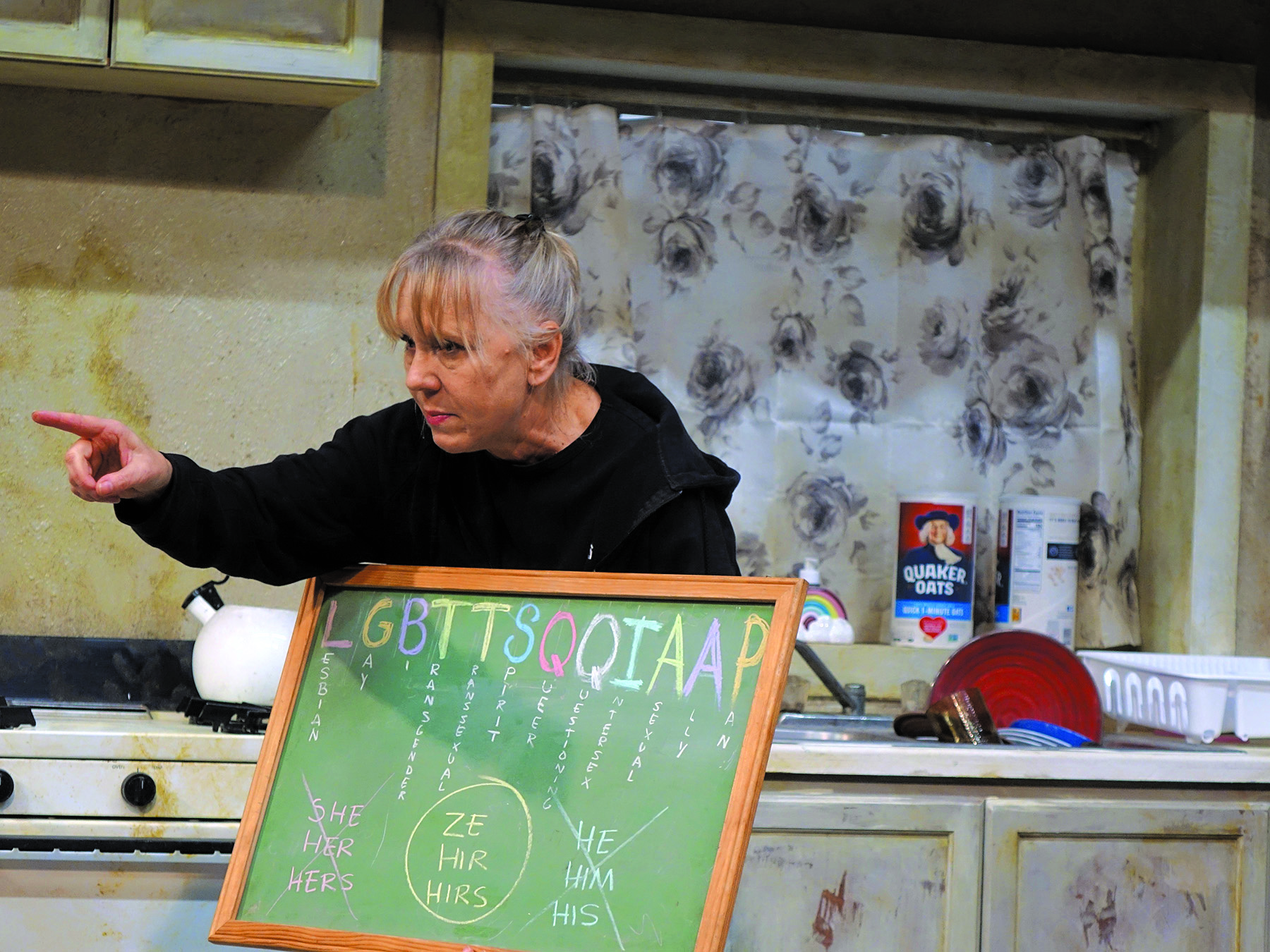 Described as hilarious and terrifying, “Hir” is a dysfunctional family dramedy for a new era: a highly intelligent, heartfelt and deeply, darkly humorous portrayal of a family in crisis, in which domestic abuse, the trauma of war and the acceptance of gender neutrality are illustrated in a nearly absurd, emotionally gripping, intensely real dynamic. Somewhere in the American suburbs, Isaac, dishonorably discharged from his tour in Afghanistan, has returned home to discover a household in revolt.

The insurgent: his mom. Liberated from an oppressive marriage to Isaac’s father by his debilitating stroke, and with Max, Isaac’s newly out transgender sibling, as her ally, Paige is on a crusade to dismantle the patriarchy.

The Pride L.A. spoke with Director Bart DeLorenzo for an inside scoop.

Tell me a little bit about “Hir” and why you wanted to direct it.

Hir is ferocious. It’s a brilliant dark comedy that gets at the heart of the American family and the “new” American family. The writer, Taylor Mac, is a genius – as anyone who’s seen the great 24-Decade History of Popular Music downtown at the Ace Hotel and Holiday Sauce at Royce Hall will tell you. The wit, irreverence, and fierce intelligence combine to create unique pieces of entertainment that you can’t help but talk about for days afterwards. Hir offers the chance to experience this mind-blowing sensibility much more intimately.

How do you approach a play like this? How does it compare to previous works you’ve directed?

This play is crazy. Taylor Mac calls the style “absurd realism,” which to me means that he’s taken the familiar trappings and resentments of classic American drama and pumped them up to shocking ridiculousness. So I think you rehearse it like a conventional realistic play, but then you try and release everyone to go further – in their performances, in the design, in the pace and the style. It’s those moments in rehearsal when I’m aghast at what’s happening in front of me that I think we’re doing the play justice.

What is a particularly hard scene to direct and why?

Every play has different challenges, but I’ve never had one in which the props were so specific and complicated. The play takes place in a very cluttered room and we use every item in it. There’s food prep (and food fights), there are “performances” within the play, songs, dances, physical struggles, it’s got everything. This is not a sitting-around-talking play. I think the sheer range is the most challenging.

What is your favorite part of the play?

That’s hard to say. As an audience member, I love to laugh and I love to cry. This play gives big opportunities for both. Maybe the moment – which I don’t want to be too specific about — in which the characters are fighting with everything they’ve got and it reaches a kind of crazy comic pitch and then the bottom drops out. And a character reveals something we’ve never seen. I love that moment. It feels like we’re getting at the core of something. I’m sorry I can’t be more specific, but I don’t want to spoil it.

It seems that this play is packed and complex. What message do you hope the audience leaves with?

I don’t think it’s a message play. It’s an experience that asks a question. Through the lens of a suburban American family, the play takes the audience on a journey into the heart of this present political/social moment and shows the current struggle in all its complexity. Where will we go as a culture? To “make America great again”?

Retreating to some sort of oppressive patriarchal past, or stepping toward a very uncertain aspirational future? And what will we do with the past and those that can’t find their way? Like all great American plays, I think Hir asks us to consider where we’re going.

How is this play relevant to the current climate?

It’s everything about now. This year, it’s being produced everywhere in the country because it sizzles within this cultural moment. The questions of power and privilege, gender and sexuality, and who will inherit the earth. And it proudly takes as its form, the story of a “classic” nuclear family and then twists it into a delirious dark sitcom that’s also a tragedy.

Why should people come see this play?

To see all the questions already in your head brought to vivid hilarious life so that you can see them more clearly. To laugh deeply at all the ridiculous contradictions in our current moment.  To feel more alive.