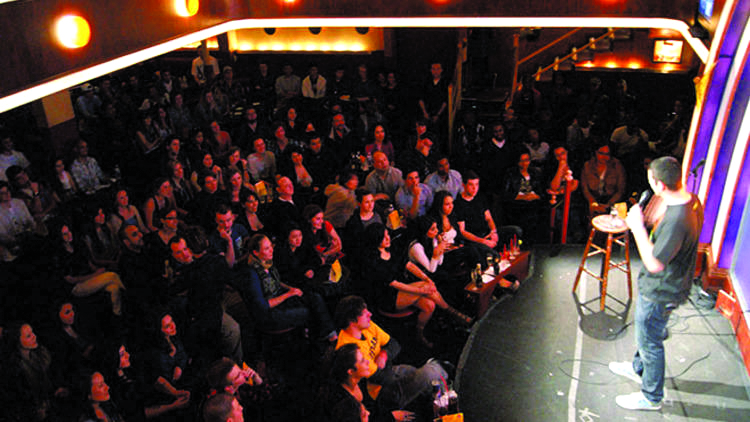 The Laugh Factory’s monthly LGBTQ+ comedy night Rainbow Pop! is back for the holidays, and it is going to slay.

The Pride L.A. spoke with creator Aidan Park about what to expect.

So if you could tell me in one sentence, what is Rainbow Pop!?

How long have you been hosting?

How do you find acts that you think will bring that fun and fabulousness to the show?

I like high-energy positive, or some kind of energy behind it, like a drive. I think that the LGBT community is empowered by energy. We are activated through the chuga-chuga; the train underneath. And so if somebody is going through something and they’re come in and they actually are angry about a position, that’s energy. If they are happy or some some kind of energy behind it. So I like to pick acts that are driven by something, like an engine underneath. I love to try to pick acts that the LGBT community would respond to. So like maybe I wouldn’t put Dane Cook on the lineup necessarily; although he could be considered eye candy for some people.

How did Rainbow Pop! come to be?

So I was running the LG [LGBTQ+] show in Long Beach and there was an all-female show in Hollywood. So there was like an all-female show that they wanted to combine us with. So we combined that what with Comedy Realness [Rainbow Pop! before it was Rainbow Pop!]. But as we started doing it, the LG community really responded and the all-female… the end of it was okay, but the LG community came out to support in huge numbers. So they were like, “well, let’s just make of the LG show.”

How do you like being on the production side of stuff.

I love it. I think it’s so fun because it’s like it makes you feel empowered.  And as a member of the LG community, you that empowerment is everything. So sometimes I’ll get like crazy things I have to accomplish.  And then it happens and it’s like, “Oh yeah.” And bringing the community together… the chance to meet all these different people. We got to work with Equality California and AIDS Healthcare Foundation and the Queer Mafia of Long Beach… Like bringing people together is really rewarding. I made so many friends.

What can audiences expect from the Christmas Special?

So our show was always hosted by the drag queen.  And so, Christmas drag. So – lots of balls. We are sponsored by a bunch of different companies and so there are three gifts raffles. We’re working with Orange Theory Fitness where I go to the gym and we want them to provide us some hot looking go-go boys.