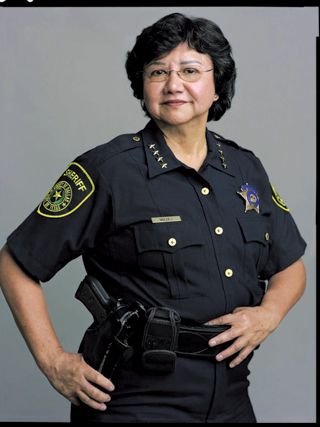 The words “liberal” and “Texas” do not naturally go hand in hand. Former Dallas County Sheriff Lupe Valdez is aiming to change that with her gubernatorial run. Challenging known anti-LGBTQ+ incumbent Greg Abbott, Valdez is aware she’s working at a disadvantage in a state where George W. Bush, in his own former position as governor, once declared June 10 to be Jesus Day. Yet, as Valdez told The Advocate, “Everybody’s telling me this is an uphill battle. My response to that is, when has it not been an uphill battle for me? … I’m getting darn good at uphill battles.”

It’s true: As the youngest child born to migrant worker parents in a family of ten, Valdez often worked multiple jobs throughout her life in order to support herself and complete college, eventually obtaining a Master’s degree. It’s a background that truly embodies the old spirit of the American dream, one that’s been summarily crushed over the short period of time the Orange One has been in office.

Valdez is also certainly no stranger to the “officiality” of government. She served in the military and eventually became the sheriff in Dallas County – naturally, the first Latina and the first out-lesbian to do so. In the face of those constant uphill battles she was talking about, Valdez still managed to be re-elected for three terms before choosing to resign in 2017 so as to pursue her campaign for governor. Dissatisfied with the way Abbott and his cronies run the state legislature, Valdez has commented, “They’re known for hostility to anyone other than their own. Muslims, transgender people…we need a government that respects everybody for who they are.”

And if we can’t do it on a national scale, maybe it is best to start within one’s own state, one that according to Valdez, isn’t as conservative as it seems, noting, “Texas is not a red state. It’s a nonvoting state. It’s up to us to get these votes out.”

Should Valdez manage to galvanize Texans to do just that with the tantalization of her progressive platform, it would mark the first time in twenty-two years since the state has allowed entrance of a Democrat into the office of governor (the last one being Ann Richards.) So, if you believe in Jesus Day, please pray this liberal drought will end.