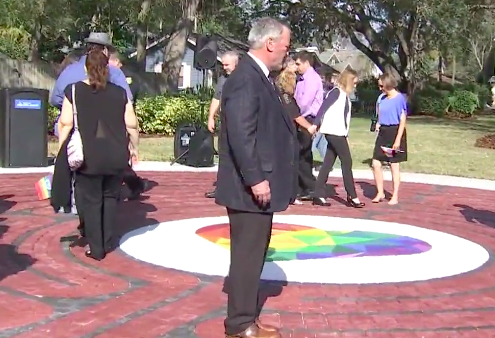 A “sanctuary of hope” is what the minds behind the onePULSE Foundation hoped to achieve through the creation of a memorial in Orlando’s Colonialtown Square Park. But hope is a complicated thing–not quite an emotion, not quite a stance. It’s also a hard thing to quantify, like faith. And it’s a hard thing to hold on to in the wake of a tragedy as stunningly terrible as the Pulse massacre in Orlando, Florida on June 12, 2016, when Omar Mateen shot down 49 people at the neighborhood gay club.

Perhaps that’s why the architects behind the new Pulse memorial, just completed in Orlando after being OK’ed by City Council, decided to create the shape of a labyrinth instead of something more straightforward. What happened the night of June 12, 2016 wasn’t straightforward. It was hateful, confusing, and painful, and it robbed 49 people of the chance to tell their own confusing, complicated stories at the end of a long, happy life.

After the Colonialtown Neighborhood Association voted unanimously to approve the project in mid-December, plans to erect the monument went instantly into effect. The monument is designed as a park with benches and pavers for each individual life lost in the attack, and is created in the shape of a maze with the Orlando United heart at the center.

But the onePULSE Foundation isn’t stopping there. The intended sanctuary of hope isn’t supposed to just be a single monument or gathering place. The foundation is hoping to create a space that can live outside of a single designated area by creating 49 separate scholarships for innovators and creators as well as a museum honoring and memorializing the victims of the attack. But the monument, with its daring design concept, is a beautiful start. By giving visitors a way to walk through the dedicated space without separating their confusion, hurt, and pain from the experience, the monument is turning the experience of mourning outward, almost creating a conceptual art piece out of the collective emotion felt by the queer community in response to Mateen’s violent act. It’s a bold way to think about remembering the dead, but a necessary one, especially for a community that’s focused on moving forward toward a safer, saner future.