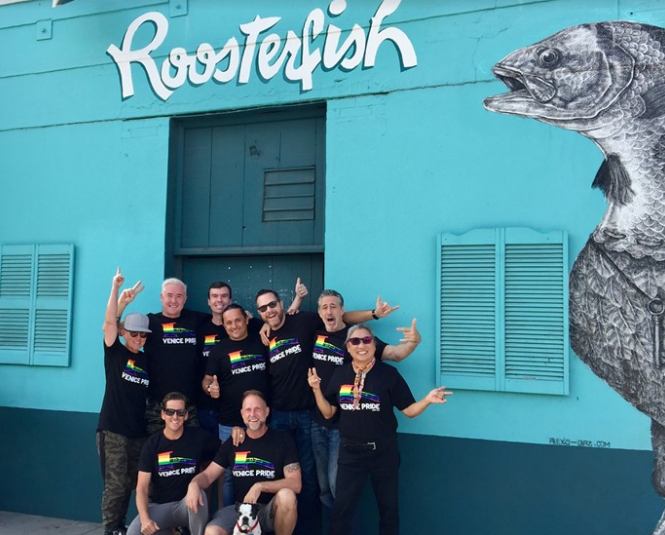 Thanks to the tireless efforts of Venice citizens, including Venice Pride founder Grant Turck, the historic Abbott Kinney gay bar Roosterfish, which closed last year, is set to reopen for good by year’s end.

For the gay community of Venice, Roosterfish was more than just a bar. It was one of the only places on the West Side where you could go to flirt, booze, and find love on the dance floor without any fear of judgment or danger. Initially opened in 1979, Roosterfish thrived as an alternative to the WeHo bar scene, and was able to outlive one of the oldest West Side bars – the Friendship, which opened in the ‘40s and closed in 2005 – by 11 years. But in May of 2016, Roosterfish’s owners, Walter Schneider and B. M. “Alex” Alexander, had to close up shop. The building, however, with its robin’s egg blue exterior and cheeky portrait of a Rooster-fish hybrid on the side, remained vacant.

Fast forward to this June’s 2nd annual Venice Pride, when Turck, after having tried unsuccessfully to turn Roosterfish into a historic landmark, found out that two new leaseholders of the Roosterfish building had planned to open a new gay bar where the old one stood. Mario Vollera and Patrick Brunet, the new owners, allowed Turck to convince them to resurrect Roosterfish instead. And so they did, thanks in part to the wild success of Venice Pride and all the action, excitement, and revenue the festival has been bringing to Venice – and specifically Abbot Kinney Boulevard – in the past two years.

“Venice Pride was very much born out of the closing of the Roosterfish,” Turck told LA Weekly. “Had the Roosterfish not closed, that probably would never have come to be.”

We don’t have an official launch date for the new Roosterfish opening, but we do know that a pop-up event called “Roosterfish Revived” will take place on September 23 as a prelude to the Abbot Kinney Festival.

“We love Venice. We love Abbot Kinney. Roosterfish is such an historical landmark that we wanted to make sure it won’t become another retail store; that is why we contacted the landlord and convinced him to give it to us,” Vollera and Brunet told the LA Times, “Venice’s identity was forged from the melting pot of nationalities, cultures, and ambitions. Reopening Roosterfish is a cultural act.”

Turck agrees. “As the fight for full equality continues, inclusive spaces like the Roosterfish continue to be the best places for emerging generations of LGBTQ adults to connect and share their experiences.” Turck told The Pride. “The Roosterfish is more than a bar, it’s a community center worth protecting.”