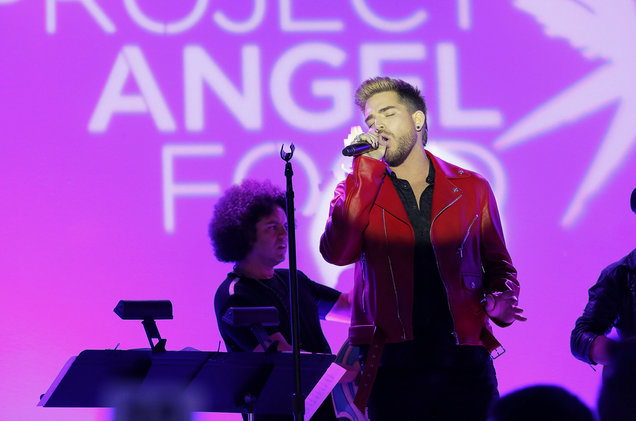 The star-studded event brought out a cadre of charitable celebs including Queen front man Adam Lambert, who sang George Michael’s hits “Faith” and “One More Try,” before closing with Queen’s  “Somebody to Love.”

Guests were treated to delicacies created by LA’s most famous chefs, including Rory Hermann (Barrel and Ashes) and Neal Fraser, chef/owner of Redbird and Vibiana.

Over $600,000 was raised at the auction, which included a set visit to the taping of “Will and Grace,” which sold for $10,000. An anonymous donor donated $10,000 for a one-on-one reading with Hollywood medium Tyler Henry. I even received a reading gratis from my friend Ron Scott, who represents the young medium.

George Michael was a dedicated volunteer and supporter of Project Angel Food, and posthumously received the organization’s Elizabeth Taylor Leadership Award at the event.  Michael was credited with keeping the organization’s doors open and feeding the critically ill with medically tailored meals every week. His generosity will never be forgotten, and it was reassuring to see that this legendary performer received the recognition and appreciation he deserved.

I have taped hundreds of television shows with celebrities including Joan Rivers, Milton Berle and Martin Landau, but I was thrilled to appear in the TV show, Zhouzheng (“A Beautiful Life”)  which airs on HTTV in California and China. Joey Chung, the affable host, has been producing this five night a week show for over 25 years.

I was pleased to appear with famed architect/designer Sandra Costa, who has completed many projects in China, and recently worked on the renovation of the Egyptian Theatre in Hollywood. Sandra, who is known by the Chinese as the God Mother of Design, is a favorite personality for the elite in Beijing and Shanghai. She designs homes and restaurants and manufacturers her custom furniture and exports from the USA.

The other guest was Zehra Sun, who with her husband, Dr. George Sun, has created a fabulous skin care line, MDSUN. It was the exclusive product sponsor of the 66th Emmy Awards.  I was pleased to be in the company of these esteemed international global ambassadors.

Today, in honor of Martin Luther King, Jr. Day of Service, the City of West Hollywood encourages citizens to volunteer...

“Thriving in Los Angeles as a person of trans, non-binary, or intersex experience is challenging,” Eden Anaï Luna, Manager of...

Tomorrow marks the 30th annual National Coming Out Day. This is the day when folks can come out as LGBTQ+ to friends, family and coworkers. Coming out is a powerful...