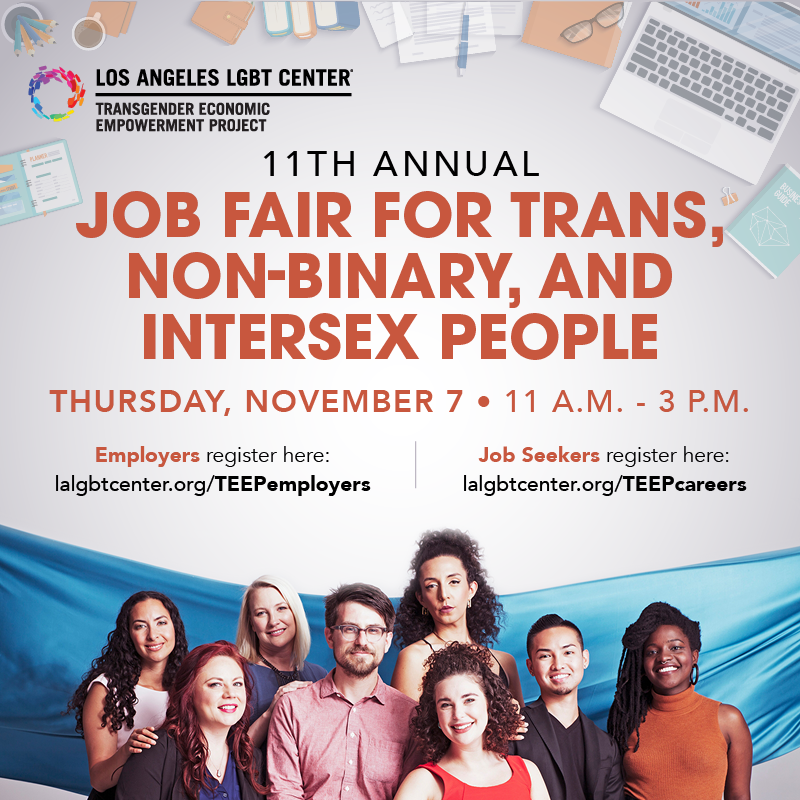 “Thriving in Los Angeles as a person of trans, non-binary, or intersex experience is challenging,” Eden Anaï Luna, Manager of the Transgender Economic Empowerment Project, said.

Luna said that there are many intersecting socioeconomic factors that affect the unemployment and poverty rates for trans, non-binary and intersex folks. She noted the lack of legal protections on the basis of gender identity and gender expression on a federal level. There is also a level of federally-sanctioned discrimination against gender diverse people that encourages individual states and companies to continually perpetuate discriminatory hiring and firing practices.

On Thursday, November 7, from 11 a.m.–3 p.m., the Los Angeles LGBT Center will host the 11th annual job and resources fair specifically tailored for trans, non-binary, and intersex people at the Center’s Village at Ed Gould Plaza. The free fair is hosted by the Center’s Transgender Economic Empowerment Project (TEEP) in partnership with programmatic funders City of West Hollywood and Citi Community Development, as well as community partners Trans Can Work, JVS SoCal, and the Human Rights Campaign Foundation.

Luna said that the job fair is the bridge to economic stability, success and ultimately dignity in a workplace for a person of these experiences.

“At other job fairs, employers often presume that the jobseekers whom they are interacting with identifies as cisgender and heterosexual,” Luna said. “At our job fair, we aim to not only dispel that myth that gender diverse professionals do not exist. Rather, we celebrate and welcome diversity as the new normal.”

Since launching in 2008, the job and resources fair has attracted more than 1,500 potential candidates with hundreds of them eventually obtaining employment. This year, 40 top-tier corporations and companies are anticipated to participate in this year’s fair.

“Each year our participating businesses continues to grow. This year, however, we had to be more selective with the registration process. We have gathered employers who have demonstrated their commitment to support inclusivity practices on state and national scales. We are certain this will continue to set the standard to inclusive hiring practices across the country,” Luna said.

Employers will be conducting interviews on site and will be ready to hire the best candidates. Job seekers will also be able to access resources at the fair such as one-on-one résumé reviews; an interviewing skills workshop; and a photo booth for professional headshots. Professional clothing, haircuts, hairstyling, and makeup will be provided in preparation for the professional headshots. Participants will be able to download their headshots on USB flash drives donated by Grindr and ICM Partners.

Due to ignorance, trans, non-binary, and intersex people often have to live in the very margins of society, Luna said.