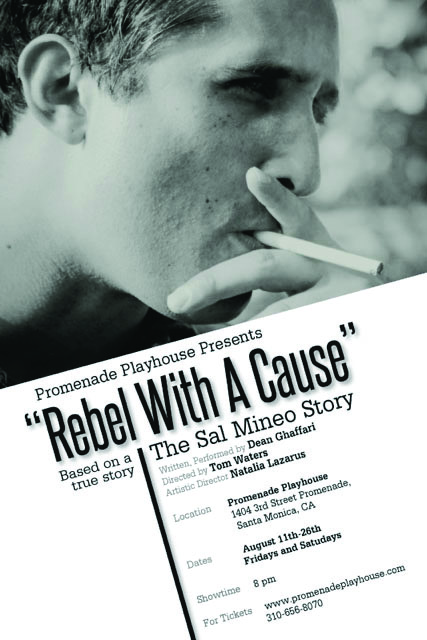 The actor Sal Mineo’s life, in many ways, mirrored that of his two-time co-star James Dean. Like Dean, he blasted to fame in 1955’s “Rebel Without a Cause” as a young, sensitive member of the new generation. Like Dean, he had a knack for playing tragic, misunderstood characters. Like Dean, he was bisexual and met an early, tragic death. But unlike Dean, Mineo was murdered, most likely because of his sexuality, in an alley behind his Sunset Strip apartment at the age of 37. That murder defined his legacy and put a definitive stop what was – at the time – looking like a solid comeback for the aging star.

That murder – and the comeback before it – is the subject of “Rebel With a Cause,” Dean Ghaffari’s one-man show about the actor, singer, and gay right’s activists final days.

The Mineo story lends itself to the classic tragic format – humble beginnings (Mineo was the Bronx-born son of coffin-makers) early success, a sharp fall from grace, a return to the spotlight, and a gruesome, mysterious death that cut the actor’s life short before he could return to his former glory, with only $20 to his name at the time of his death. In addition to being an early gay rights advocate, Mineo was also an early critic of the kind of racist typecasting that plagued Hollywood in the ‘50s, putting Mineo in every “othered” role from that of a Sioux warrior to a Jewish soldier returning to his homeland to a doomed Mexican worker on Rock Hudson and Elizabeth Taylor’s estate in “Giant,” the second film he co-starred in with James Dean.

It’s oddly tempting to say that Mineo was a bit too ahead of his time – that his brand of raw talent, bravery, and activism was just a bit out of step with a world that was just starting to wake up to the thousand cuts of injustice it had suffered over the last few centuries. But that would be too easy. Mineo deserved to live and do his work and pursue the love he wanted. With Ghaffari’s play, we get to see him live again, if only for one more night.

“Rebel With a Cause: The Sal Mineo Story” opens at Promenade Playhouse on August 11.