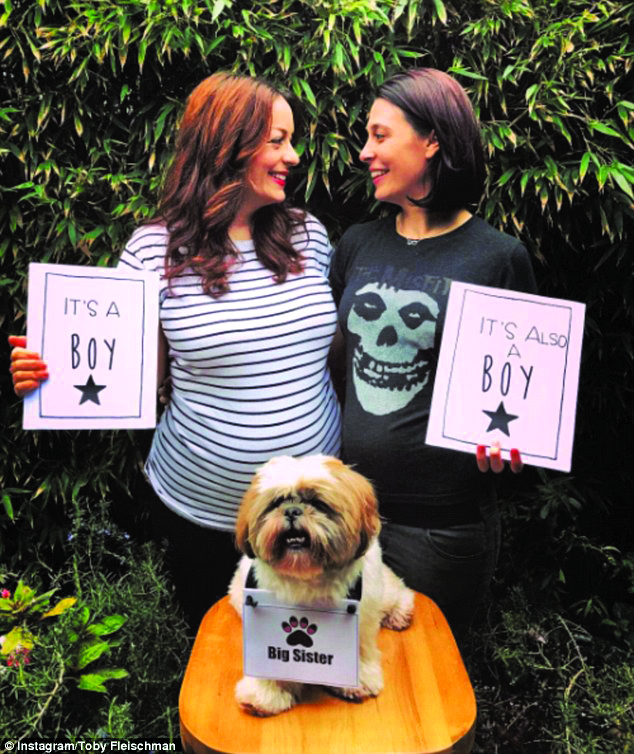 Los Angeles married couple Lindsay Lanciault, 34, and Toby Fleischman, 41, are both set to welcome baby boys from the same donor within weeks of each other. However, the double births were not intentional.

The pair had decided that Fleischman would carry the child given that she was older and her window to have a child was closing.

However, after two years of trying to get pregnant with no luck, they decided they should both be inseminated. They also decided to use the same donor.

Fleischman, a Hollywood celebrity make-up artist finally fell pregnant in November, so Lanciualt, a speech-language pathologist, decided to stop trying. However, she discovered in December that she too was pregnant.

The couple shared their surprising news on Instagram displaying their twin baby bumps saying ‘It’s a boy!’ and ‘It’s also a boy!’

Their dog Tzu Lemon is also in the photo.

“Lindsay and I are both pregnant!” Toby wrote. “Yes, you read that correctly. We are both having a baby… at the same time. Well, three weeks apart to be exact. “Everyone always says they want to get pregnant with their best friend and I just happened to be lucky enough to be married to mine,” she added. “Our ‘twin’ boys will be joining us this summer and we couldn’t be more elated!”

The couple says they plan to adopt each other’s sons as soon as they can.