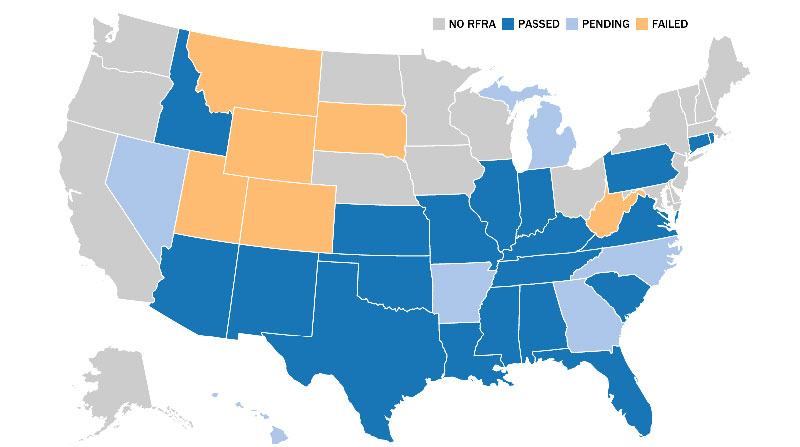 BY TROY MASTERS  |  Almost in a blink of the eye since the Supreme Court of the United States made same-sex marriages legal nationwide, Religious Freedom bills have been debated or implemented across the country in whack-a-mole fashion.

Even before last June’s ruling, LGBT rights groups had been putting out Religious Freedom bill fires across the nation— successfully in some places. But recently we have seen them grow in scope, going as far as preventing local municipalities from enacting laws that protect LGBT people and crafting an outright license to discriminate.

There’s no real mystery about the political strategy of the “Religious Freedom Restoration Act.” The bills seek to strengthen the legal argument in the Hobby Lobby case that allows one person to discriminate against another citing their “sincerely held religious belief” as their reason. That case gave employers a wide path to discrimination and even allows them to withhold employment based insurance coverage of medical procedures they deem in conflict with the owners personal faith. That is why LGBT rights groups, along with a slew of corporations and celebrities, have protested the bills and laws as they have arisen.

Just this week an antigay Religious Freedom bill was vetoed by the Governor of Georgia but another in North Carolina that also prohibits local municipalities from enacting pro-LGBT ordinances has so far persevered.

On Tuesday, April 5, Republican Mississippi Gov. Phil Bryant signed into law what is widely believed to be the most sweeping anti-LGBT legislation in the U.S., granting denial of products and services in a wide range of venues. The bill passed 70-47 in the Republican-controlled state House of Representatives, despite several procedural attempts to kill or delay the bill by Democrats. Bryant said he signed the bill “to protect the sincerely held religious beliefs and moral convictions of of individuals, organizations, and private associations.”

In a fuck you move, Mississippi’s state’s Religious Freedom bill was signed into law days after the Supreme Court of the United States ruled Mississippi’s ban against child-adoption by same-sex couples was unconstitutional.

Most Democrats were furious. “This is the most hateful bill I have seen in my career in the legislature,” said Rep. Stephen Holland, telling his Republican colleagues, “You ought to be ashamed of yourself.”

What are these laws? Why do we fear them? What do they do? What is their history? The original impetus for Religious Freedom laws is worth a look to provide a wider context for such targeted discrimination.

Originally, the idea for “religious freedom” laws had no connection to same-sex marriage or gay rights.  In the early 1960s, the Supreme Court took on a case called Sherbet v. Verner and with it established a basic standard for protecting the free exercise of religion. The government could pass laws that impacted free exercise if it was possible to demonstrate a “compelling interest.” An example of such a compelling interest might be protecting public safety — or, following enactment of civil rights laws, preventing discrimination based on race.

But a series of rulings during the early 1990s drew outrage when the federal courts allowed the government to infringe upon Native American religious practices — in part by withholding unemployment benefits from people who used peyote. The Court reasoned such laws were ok because they did not single out specific religions — even though the ruling effectively impeded the practice of certain faiths. Congress responded to the infringement by passing a federal Religious Freedom law. The Senate vote was overwhelming and bipartisan (97-to-3) and was signed by President Bill Clinton.

The federal religious freedom law said the government may not “substantially burden” the practice of religion without a “compelling interest.” And even if the government does have such an interest, the law said, it must shield the interest in the “least restrictive” way. The Supreme Court clarified that religious freedom law could apply only to federal action and that lead some state legislatures to pass their own laws. Most state constitutions already provided residents with similar guarantees.

Fast forward through 20 years of silence on the matter. In 2014, the Supreme Court ruled in the Hobby Lobby case that corporations could essentially act as people and create discriminatory rules if the corporate owners had “sincerely held religious beliefs.” (http://www.nytimes.com/2014/07/27/magazine/what-the-hobby-lobby-ruling-means-for-america.html).

That gave religious conservatives the impetus to morph the ruling over Obamacare and contraception coverage into a backlash over the rapid legal advances and social acceptance of LGBT people. In states without gay rights laws on the books, last June’s Supreme Court ruling requiring each state to honor same-sex marriages provided impetus to conservatives to use religious freedom laws to construct what they hope will be a gay rights firewall.

WE ARE NOW TALKING ABOUT AS MANY AS 36 PROBLEM STATES
Most of us fear these laws are a cudgel that allow willy-nilly discrimination against LGBT people. Some say the laws give cover to people of faith to practice aspects of their religion that heretofore have been have kept in check by civil rights laws, such as denying public services and accommodations.  Others say the laws are a poorly constructed — but necessary – intersectional negotiation of the freedom of religion and the mandates of civil law. For LGBT and allied civil rights advocates, recent events in North Carolina and Mississippi show that newer executions of so-called religious liberty laws are more onerous and broaden challenges to non-traditional gender pairings, mores and identity.

Religious freedoms laws have grown beyond the question of faith and have moved into the realm of individual personal discomfort (such as the basic right to pee) and one’s right to express anger over that discomfort, thus denying basic civil rights. The laws have evolved to give businesses and business owners broad leeway to pick and choose which customers they will serve, which employees to hire or fire, etc. Worst yet, in states where the laws were passed as so-called anti-transgender “ bathroom bill,” any individual can now act as the “genital police” and challenge someone going into a bathroom to prove that they match the gender assigned to that bathroom. The bills essentially criminalize peeing, based solely on one individual’s perception of another individual’s personal appearance. A straight “butch-looking” woman with short cropped hair could be challenged upon entering the “Ladies Room” if someone perceives her to be a guy in disguise.

Religious freedom laws and LGBT rights are now on an inexorable collision course.

Because there is no federal overarching LGBT civil rights bill that would prohibit discrimination based on sexual orientation or gender identity, LGBT people must rely on a patchwork of state and local laws.  This is why LGBT and allied civil rights advocates are pushing for the Equality Act, which has been introduced in Congress but is not expected to even get a hearing under current Republican-control.

TARGETING “COMPELLING INTERESTS”
Meanwhile, Mississippi and North Carolina’s new laws give business owners protection they didn’t have before. And by going the extra step of invalidating local laws that protect LGBT people, these states have gone much farther than before. An LGBT individual trying to rectify and find justice for their discrimination case will find no sympathetic judge who can point to a city’s ordinance banning LGBT discrimination. Legal recourse for those who suffer discrimination is a near impossibility — something Lambda Legal and the ACLU noted in their challenges, referring to the famous Supreme Court case Romer vs Evans in 1996 that overturned Colorado’s anti-gay Amendment 2.

But until the Supreme Court rules these laws unconstitutional, Religious Freedom laws like these, once cloaked in religious protection, are simply OKed open bigotry.

I know there is a tendency to say that these states are the exception. I think the map proves otherwise and combined with the toxicity of the current election cycle, it shows how vulnerable we are without federal protections.