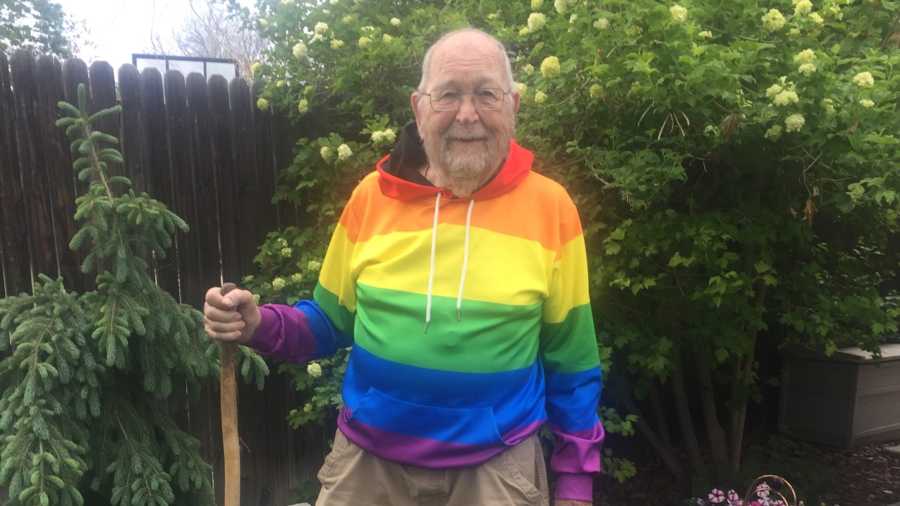 Kenneth Felts, a local to Long Beach, California is making waves in the LGBTQ+ community by coming out of the closet at the age of 90.

While writing his memoir during the COVID-19 pandemic, Felts said he “awakened many soul-searing memories of my early life.” He talks specifically about his one true love named Phillip.

In the 1950s Kenneth met Phillip in Long Beach, California, where they both worked for a retail credit company and, as Felts states, “instantly fell in love”.

It’s no surprise that at this time Felts, who was 29 years old, was suppressing his sexuality but despite how he felt Felts and Phillip began a year long love affair and moved in together.  Unfortunately their romance did not last. Felts, feeling the pressure and fear of living his true self in the 60’s, decided to leave and never speak to Philip again.

He went on to live a straight life. He married a woman, whom he divorced, had a child and spent 30 years working for the Colorado Division of Rehabilitation as a counselor and supervisor. All the while, he pushed down his feelings of being attracted to men.

Felts was diagnosed with lymphoma in the fall of 2019 and after several rounds of chemo and medication, his most recent scans were cancer-free.

Felts said the cancer, along with COVID-19, propelled him to finally face his truth. He came out to his daughter Rebecca, who coincidentally came out to him years earlier, in an email telling her about his lost true love Philip.

His daughter Rebecca says “I was surprised that he came out, but I wasn’t surprised that he was gay. I am so proud of him and so happy for him. He’s still carrying some regret and guilt, but I think the healing has started.”

After telling his daughter and with her support, Felts decided to come out to the world. He posted on June 5 to his Facebook page and emailed friends and family and since then the torrent of support he has received has been “overwhelming” as Felts put it.

Despite just coming out, Felts said, he’s been searching for Phillip since his divorce 40 years ago. He never managed to find his long-lost love, but after sharing his story publicly, he learned that Phillip, who lived his life as a gay man, died two years ago.

In Phillip’s memory, Felts said, he will embrace his sexuality for as long as he has left. He flooded his wardrobe with rainbow-colored clothing, purchased a pride flag and even put a blue streak in his hair.