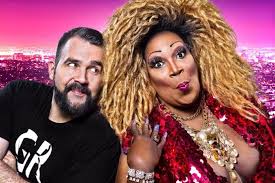 From gracing the world with her boisterous personality, glitter, wigs and heels to sharing herself on her popular YouTube show “Hey Queen!” which gave her a world-wide audience and millions of followers, Lady Red Couture was a name that people in the LGBTQ+ community knew and respected.

A local to Weho and a drag and trans icon, Lady Red Couture, who’s real name was Kereemia Baines, died on July 25th and was only 43 years old. Her friend and Co-Host on “Hey Queen!” Johnny McGovern announced the news on social media writing, “It doesn’t feel real but the beautiful light that was Lady Red is gone,” he wrote. “I love you baby. I will miss you every day.”

Baines, a West Hollywood resident, was an actress who performed in “Leave It on the Floor” (2011), “Judge Lady Red” (2015), and “Johnny McGovern: Dickmatized” (2011). Baines was known as the “security diva” at Gym Bar, the popular West Hollywood gay sports bar, which closed recently. And she stood out for her height of 6 feet, 7 inches. She described herself as “a trans woman that lives as the largest drag queen in captivity — not just another drag queen”.

A week prior McGovern had posted to social media that he had rushed Lady Red to the hospital due to complications with cyclic vomiting syndrome, a chronic condition that the performer suffered from. At the time McGovern asked for donations to help Lady Red with her bills given that she was in the intensive care overnight. On Friday McGovern reported that she had been on a breathing tube and unconscious for five days but was stabilizing. McGovern has said that “ALL the generous donations to her Venmo over this week” will go towards funeral costs.

Drag Queen colleagues such as Detox, Shangela and Adore Delano, as well as celebrities such as Ross Matthews took to social media to express how heartbroken they were and how missed Lady Red Couture will be.

Katya, from RuPauls Drag Race Season 7 and All Stars Season 2, said: “Oh my god I can’t believe Lady Red has died. She brought me so much joy the past few years when my manic a** was working the WeHo beat. Rest easy, beautiful soul.”

Her cause of death is unknown, although she suffered from a chronic vomiting illness however it was confirmed by McGovern that it was not from a COVID-19 related illness.

Baines grew up in Park City, Utah, and attended Weber State University in Ogden, Utah, graduating in the class of 2001. Her IMDb profile says that “although most drag queens simply use their drag name on stage and during appearances, he subscribes to the idea of living as his drag character full-time. Consequently, his drag name, “Lady Red Couture,” is also his legal name.”

Her sister Krystal Butler took the time to express her gratitude for people’s condolences by saying “Thanks for all of the condolences sent to me and my family in this time of grief… I am Grieving her… I can’t stop crying… I will not get over this ever…,”